Karaka – Six Of The Best 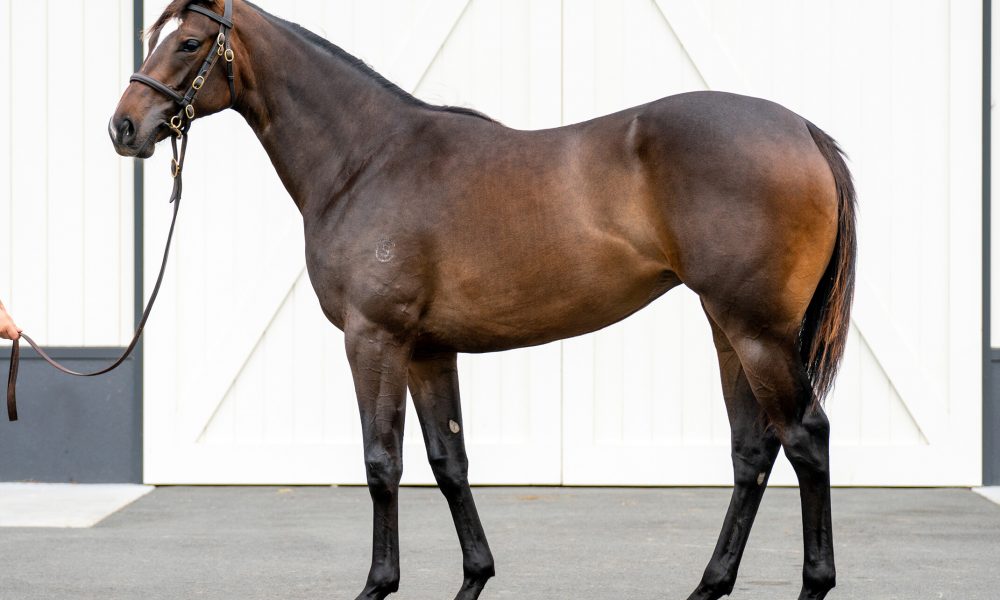 Here, in lot order, is a look at some of the hot lots at this year’s Karaka Yearling Sale.

The Eight Carat (Pieces Of Eight) family is one of New Zealand’s most famous, with – at last count – at least 35

stakes-winners and 89 stakes wins coming from descendants of the great mare, Verry Elleegant (Zed) and Melody Belle (Commands) among them.

And this filly from Cambridge Stud’s 40-strong draft presents the chance for buyers to tap into the family in a powerful way, with New Zealand’s Broodmare of the Year in 1995-96-97 coming in straight along the female line, as the fifth dam.

“This is a great opportunity for someone looking to buy into the Eight Carat family,” says Cambridge’s head of sales and nominations Scott Calder.

“She’s a three-quarter sister to a Group 3 winner, and bred on the same cross as Castelvecchio, in Dundeel over a Dehere mare.

“So she’s a stand-out from a pedigree aspect and just a great type, with a huge amount of quality about her; not overly big, but with a really good depth of girth. So, people might wonder why we’re selling her! But we’ve been lucky enough to keep the last two daughters of Ardeche, so we’re happy to give someone else the opportunity.

“A lot of people have been seeing the benefits of buying a well-bred filly, from the residual aspect, and this is a great chance in that regard. One of the themes of the Magic Millions sale was that, especially for syndicators, people can buy a filly and be confident that regardless of what they do on the track, they can have great value as broodmares later on. And of course, if you do get a good one, their value can go through the roof.”

He’s from a strong French family, out of a dual stakes-placed mare in Mary d’Or

The grey Mary d’Or has had six winners from six to race, including Australian-bred

pair Frosted Gold (All Too Hard), a triple stakes-winner in South Africa up to Group 2, and Sunshine Mighty (Murtajill), a Listed winner in Macau.

This late-August colt is set to continue the buzz around Waikato Stud’s first–season sire Super Seth,

While any first–season sire comes with the unknown quantity tag, Super Seth’s ability to leave his mark has impressed many seasoned judges.

“You definitely want to see a first–season sire stamp their stock,” Elsdon’s general manager Kerrie Cox says. “When they do, it’s like you see the strength of the genetic qualities coming through, rather than have a sire whose stock might be a bit all over the place. You look at the Savabeels – they’re all peas in a pod, plus they can run well as well.

“Super Seth has certainly done it with his first crop. Anyone you talk to says they can pick the Super Seths from a mile away: big, strong imposing types, and very forward.

“And this colt is certainly a typical Super Seth. He’s strong, very muscular, and looks like he would get up and go nice and early. He’s got a beautiful temperament, and he’s just a very striking, good-looking horse, and one who’s been very nice all the way through. Some yearlings can go through a bit of a rough stage, but he’s been on the up all the way along.”

Tough six-year-old gelding Riodini (Proisir) has been one of the top handful of trans-Tasman success stories of recent years. After a Group 3 win and Group 1 placing at home, the gelding joined the Waterhouse-Bott team in 2020 to become a million-dollar winner, with two Group 1 placings, followed by his breakthrough victory in the $1m The Gong (1600m) at Kembla Grange last November.

She’s by the stud’s NZ general sires’ table runaway leader, Proisir – sire of outstanding sprinter Levante and her burgeoning stablemate and winner of November’s New Zealand 1000 Guineas (Gr 1, 1600m), Legarto, among others – the filly has been catching the eye of many keen judges at Karaka this week.

“She’s very much in the mould of the good Proisir fillies like Levante and Legato – strong bodied, they all have that very quick look about them, and the same colouring as well,” Thompson says.

“And this one is just a beautifully balanced filly, very correct, a nice, medium-sized type, and for a filly born on November 14, it’s quite amazing how well–developed she is. But perhaps the thing that most stands out is her great attitude. She’s got great intelligence about her, she’s taken everything in her stride, and she’s settled into things so well at the sales complex.”

The filly has the potential to succeed over some distance, with her dam Piazza, a

Little Avondale’s “Italian Stallion” Per Incanto (Street Cry) continues to excel, as another three winners in Hong Kong this week attest – and the stud has high hopes that this colt will be another of his star performers.

Per Incanto, American-bred, but having shone on the tracks of Italy, has had his name put up in lights by a host of sprinter-milers recently, including last year’s dual Flemington 1200-metres Group 1 winner Roch ’N’ Horse, and star Sydney sprinter Lost And Running.

This Danehill-free colt brings the promise of extra distance, being out of Avondale

“It’s worth remembering that from Per Incanto’s first crop, his two star–yearlings at Karaka were out of mares who had them at age 19 in Cent From Heaven, and at 22 in Sound Lover,” Williams says.

“They were both really nice horses out of older mares,” Williams says. “I just think it shows that Per Incanto is such a versatile, pre-potent stallion who manages to upgrade mares. But also, I don’t believe in the old mare syndrome. Some good mares are always good mares.

“And I think this colt is superior to those two. He’s a magnificent horse; he’s got a great walk, great attitude, fantastic muscle definition, and he just looks like a racehorse. He’s one of my favourites and one of the obvious lots of the sale.”

It’s a basic rule of thumb: New Zealanders go to Australia for their speed, while Australians cross the Tasman for stamina.

This filly looks the archetypal example from the latter category: a daughter of a Galileo (Sadler’s Wells) mare who has the potential to continue VRC Derby (Gr 1, 2500) winner Tarzino’s (Tavistock) early knack of siring Classic horses, according to Westbury Stud’s Russell Warwick.

“She looks an Oaks filly through-and-through,” Warwick says. “Tarzino’s had a South Australian Derby winner (Jungle Magnate) and a Queensland Oaks winner (Gypsy Goddess) from his first two crops, and this filly looks like she’ll be in that sort of mould when she becomes a three-year-old.

“She’s got a lovely head on her, she’s athletic, and for those who know how to train a staying filly – and to look after them, and visualise what they’re going to be like when they’re three – she’s a great specimen.

“A lot of Australian trainers are not coming here to buy speed horses. They want nice horses who can get up and run a trip, hopefully for a Derby or an Oaks. This filly’s pedigree and her type suggest she can do that.”

The filly is from an immensely strong female family with a distinct staying bent. Dam Showileo, by the all-time-great Galileo, was only placed, but has produced four winners from five foals to race including Showbeel (Savabeel), winner of Trentham’s Desert Gold Stakes (Gr 3, 1600m).

Lot 515 boasts a 4Sx3D cross of the great Sadler’s Wells (Northern Dancer), via Montejo-Tavistock-Tarzino at the top, and being out of a Galileo mare.

It’s a mating which has seemed to work exceptionally well. This lot’s full sister made the top dozen from last year’s Karaka sale, bought by Te Akau’s David Ellis for $525,000, while Waikato’s Mark Chittick reports a third full–sister is now on the ground, “and all three of them have been to die for”.

The twice stakes-placed Style By Design is out of the High Chaparral (Sadler’s Wells) mare Chaparella, an eight-time winner, including in two NZ Listed events who’s also thrown a Wanganui Listed–winner in Riva Capri (Artlante).

While Chittick is proud of “an extremely even” 60-lot draft from Waikato this year, the plentiful early lookers have backed his contention that this filly is a standout.

“She’s just a lovely, very athletic, strong Savabeel filly,” he says. “We’ve all seen plenty of good Savabeel fillies, and good racehorses, and she’s got everything that they’ve got. She totally fills the eye, as one of those dark horses who

looks fast and looks a racehorse.”

Brando, and boasts a dual-female 4Sx4D cross of the great Nureyev (Zamazaan).