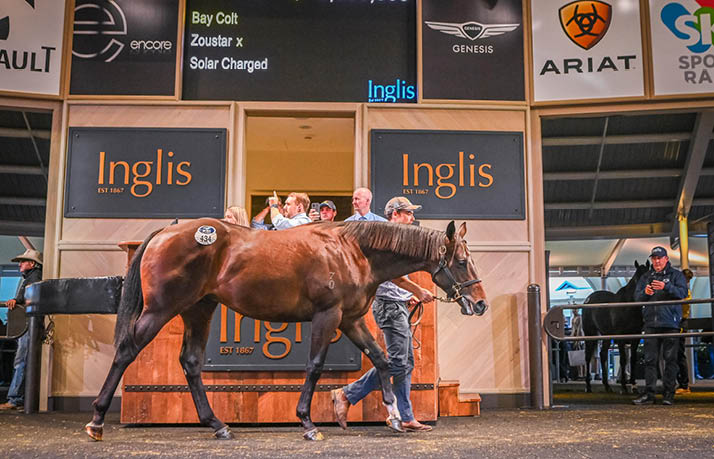 Sebastian Hutch has lauded the strength in depth of this year’s Inglis Australian Easter Yearling Sale catalogue following its release yesterday by the Sydney-based auction house.

Inglis have compiled a 457-lot catalogue for the showpiece sale, one which Hutch deemed ‘the jewel in the crown of the Australasian sales season.’ The auction will take place across two days on April 3 and 4, headlined by several standout lots from Australia’s leading breeders and vendors.

With 40 lots catalogued, Arrowfield Stud’s Snitzel (Redoute’s Choice) leads the way in terms of sire representation, a number markedly up on the 26 lots catalogued last year, closely followed by his formidable Yarraman Park-based adversary I Am Invincible (Invincible Spirit), who has 39 yearlings catalogued in 2023.

But while the progeny of Australia’s two leading stallions of recent years will no doubt be highly sought after at Easter, Hutch was keen to make known the high quality and diversity of lots on offer from emerging stallions, with the Australian breeding landscape going through what he termed a ‘transitional’ period.

“I’m delighted with the catalogue. It’s all about trying to put together the strongest group of the best credentialed horses that we can,” Hutch told ANZ Bloodstock News yesterday.

“At Easter there’s an expectation the horses will be the best looking horses, with the best pedigrees, from the best breeders, and I think the catalogue achieves that.

“We’re in a time of transition for the stallion population in this country, in that we’ve consolidated so many yearlings by what are perceived to be not just the best proven sires – your I Am Invincibles, Snitzels, Written Tycoons, Zoustars, Exceed And Excels etc – but also the best emerging stallions.

“There are strong groups of yearlings by the likes of Justify, Trapeze Artist, The Autumn Sun and Toronado, whose profile of mare has improved year on year. It’s the best group of Deep Fields we’ve ever had going to Easter.

“There’s tremendous strength and depth to the catalogue, good variety and we’re very excited about it.”

Overall, there are 54 individual sires represented in the catalogue, compared to 59 a year ago.

“It’s a very strong group of first season sires. It’s a large group, where there wasn’t necessarily one that stood out to the market in the early part of the breeding season,” Hutch said.

“The market’s responded well to pretty much all of them on the evidence of the early sales and we’re expecting each of those stallions to be well represented at Classic, Premier and Easter as well.

“We don’t have as many of them at Easter, but the yearlings by the younger stallions can go really well. Particularly the likes of Too Darn Hot, Blue Point, Yes Yes Yes, Zousain, Exceedance, Castelvecchio. There are some really, really good yearlings with some good pedigrees and I think they’ll be well found.”

No less than 20 seven-figure lots were sold at Riverside, headlined by a $3 million brother to Sunlight (Zoustar).

The Magic Millions Gold Coast Yearling Sale held from January 10-16 this year posted a slight increase in aggregate turnover when compared to 2022, as well as breaking the top lot record no less than three times as a $2.7 million son of I Am Invincible led the way. However, while Hutch believed the vibrant trading activity in Queensland was to be welcomed, Inglis’s director of bloodstock urged caution during the remainder of the sales season as to whether the results of 2022 could be replicated.

“We don’t tend to weigh ourselves down with expectation. We want to be able to walk out of the auditorium at the end of each day and say we put together the best market that we possibly could, with good buyer representation, good clearance and good turnover. That’s what happened last year,” Hutch said.

“If you’d said to me 12 months ago that we’d be capable of breaking the record for Easter dating back to 2008, a sale in which we offered 150 more horses than we offered last year, I’d have told you it was impossible. Completely ludicrous. So I’m reluctant to get drawn into comparisons with last year’s catalogue, but I think people will be really impressed with what they see from these horses and what they see from the book. And I know our vendors are particularly bullish about what’s in the catalogue and with a bit of luck, it will be a really good sale.

“We have a series of significant sales to run through February and March and I think there’ll be an expectation that there’ll be good liquidity in the market, and that’s what we’re expecting. I’d just be guarded about making predictions that we’ll be able to match figures from 2022, in terms of certain metrics. I think 2022 was such an extraordinary year that I would encourage people to be open minded about where the market might be by the end of the year.”

Of particular note, the 2023 Easter catalogue boasts a Snitzel half-sister to Golden Slipper (Gr 1, 1200m) favourite King’s Gambit (I Am Invincible), consigned by Newgate Farm as Lot 392, as well as relations to both three-year-old winners of The Everest (1200m), with a three-quarter brother to Giga Kick (Scissor Kick), by Pariah (Redoute’s Choice), consigned by Bhima Thoroughbreds as Lot 309, while a Snitzel half-brother to Yes Yes Yes is catalogued as Lot 362 in the Kitchwin Hills draft.

Half-siblings to Group 1 winners Mazu (Maurice), Hitotsu (Maurice), Russian Revolution (Snitzel), Artorius (Flying Artie), Estijaab (Snitzel), Loving Gaby (I Am Invincible), Wild Ruler (Snitzel), In The Congo (Snitzel) and Super Seth (Dundeel), among others, are catalogued for 2023, while Group 1-winning mares Catchy (Fastnet Rock), Miss Finland (Redoute’s Choice) and First Seal (Fastnet Rock), as well as the first foals out of English (Encosta De Lago), Nakeeta Jane (So You Think) and Qafila (Not A Single Doubt), are consigned within this year’s catalogue.

But while the top end of the market will be keenly contested, Hutch pointed out the success of horses purchased for around the sale average or less, a price point that in recent years has unearthed Group 1 winners Mizzy (Zoustar), Aristia (Lonhro) and Exceedance (Exceed And Excel), Zoutori (Zoustar), while last season’s two-year-old Group 1 winner She’s Extreme (Extreme Choice) was purchased for $275,000 and Australasian Oaks (Gr 1, 2000m) winner Glint Of Hope (Deep Impact) $250,000.

“At Easter there is the expectation that there’ll be a consistent higher level of quality stock available and I think that will be very much the case in 2023,” Hutch said.

“But we’ve also been at pains to highlight the fact that Easter has always been a sale you can buy well at. And certainly over the years people that have targeted that sale have done particularly well and that will be no different this year.

The leading consignor by number of entrants is Arrowfield with 68, followed by Widden with 43. Coolmore have entered a draft of 35 yearlings, while Vinery have 31 consigned and Segenhoe Stud 22.