Rising From Ashes lifts Hewitson to a Happy Valley double 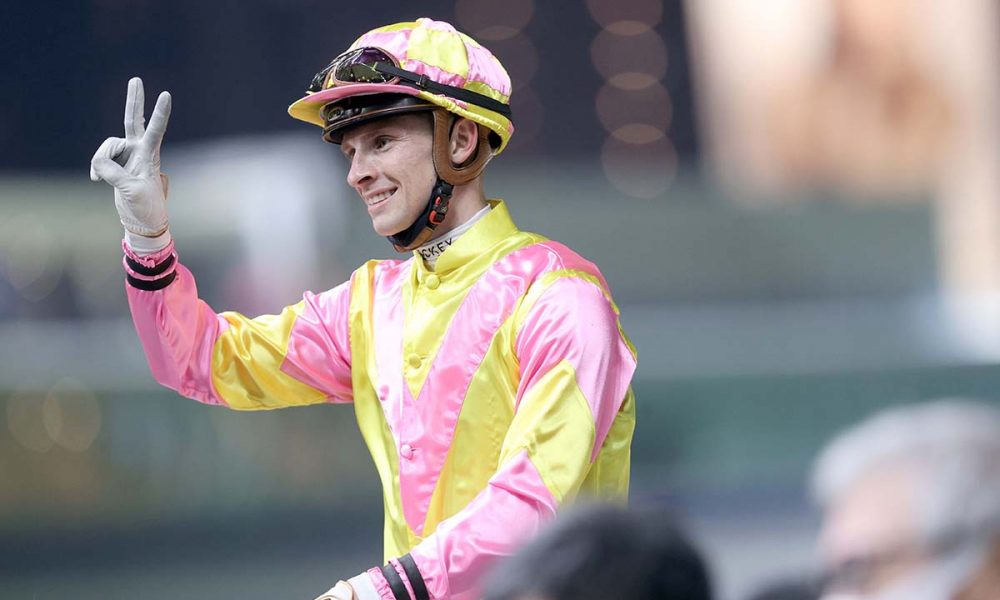 Lyle Hewitson wrapped up a midweek double at Happy Valley last night when Rising From Ashes (Shamus Award) rattled to a flashing short-head victory in the Class 3 Connaught Handicap.

“It couldn’t have gone much better. He’s a horse that tends to travel a bit strong if you wake him up too early, I thought I’d rather take the chance and ride for a bit of luck and I had a beautiful trip round.

“He was wonderfully settled and there was a mid-race break in pace and you could see everyone stack up and horses started to go a bit wider, I thought at that stage it would be the wrong move to try and circle them on a small horse, so I decided to wait for a bit of luck and I got my split through them,” Hewitson said.

Hewitson was taken by the win of the 75-rater who arrived in Hong Kong as a one-time winner in Australia. The gelding clocked 1m 40.99s for the effort.

“He’s a horse who wants a bit of room, so I made sure that I switched out once I got through and he hit the line really well, I didn’t even use the stick from behind. I think that was a tenacious win from him, he deserved it, he has the ability,” Hewitson said.

Hewitson’s first victory came atop Kowloon Great (Teofilo) for trainer Danny Shum, who surged to a breakthrough win in Hong Kong at his 14th attempt in the Class 4 Jackson Handicap.

“It would have been great to have three, being a competitive jockey I’m still looking at that first race a bit frustrated but I’m happy to have two and that’s a nice pick up win for Francis [Lui[,” Hewitson said.

The South African rider narrowly missed in the opener aboard Smiling Face (Acclamation).

“He’s a lovely horse, he had a light break and that was good. He went really well today and I’m very happy to be back on him and winning on him,” Hamelin said.

“He’s been racing really well and he deserved that. He was only touched off last time, it was just a bit awkward from the gate [barrier seven], so I had to take my medicine a little bit but they didn’t go as fast as I thought they might, so it was a good effort to come from where he did,” Purton said.

Purton kicked off his night with victory aboard Flying On The Turf (Reward For Effort) to give Jamie Richards a fourth win from the last four fixtures in the first section of the Class 4 Club Handicap.

Alfred Chan paid tribute to his late grandma who sadly passed away last Sunday, savouring a bittersweet victory aboard Sugar Sugar (Star Turn) in the second section of the Class 4 Club Handicap to cap a double for trainer Caspar Fownes.

“I was happy that I could win on him again, one thing is happy and one thing is sad, I’m happy that he can do it for me because my grandma passed away last Sunday, which is really sad.

“I came here for one ride and he did it for me and the stable – I’m very happy with that. I’m grateful that we could win again, hopefully my grandma can rest in peace,” Chan said.

The win was Chan’s third this term and second in partnership with Sugar Sugar, who will now rise to Class 3 after winning off a mark of 60 this evening.

“I’m very happy for Alfie, he deserved that. We’ve been working hard on that horse just to get him out of the gates because he’s been a bit naughty,” Fownes said.

“But he was good today, his focus was there and he gave him a nice ride. He got the job done and now obviously he’s going to go up in class and down in weight. It’s always a bit of a test but I don’t see any reason why he can’t continue to be competitive.”

Vincent Ho moved to 40 wins this season with a sparkling mid-race move aboard Daily Beauty (All American) to kick off Fownes’ double in the first section of the Class 5 Murray Handicap.

“It was a fitness test, I had to push him the whole way but he was fit and it was on him,” Ho said.

Ho took off at the 900-metre mark to hit the lead and that’s where he remained. Daily Beauty is now a five-time winner in Hong Kong across 51 starts.

Winless across his first 31 starts in Hong Kong, the gelding has come into his own this term.

“I think this is the best distance for him, last time we put him on the dirt because he has placed on it before but it seems that the Happy Valley 1650 metres is the best,” Lui said.