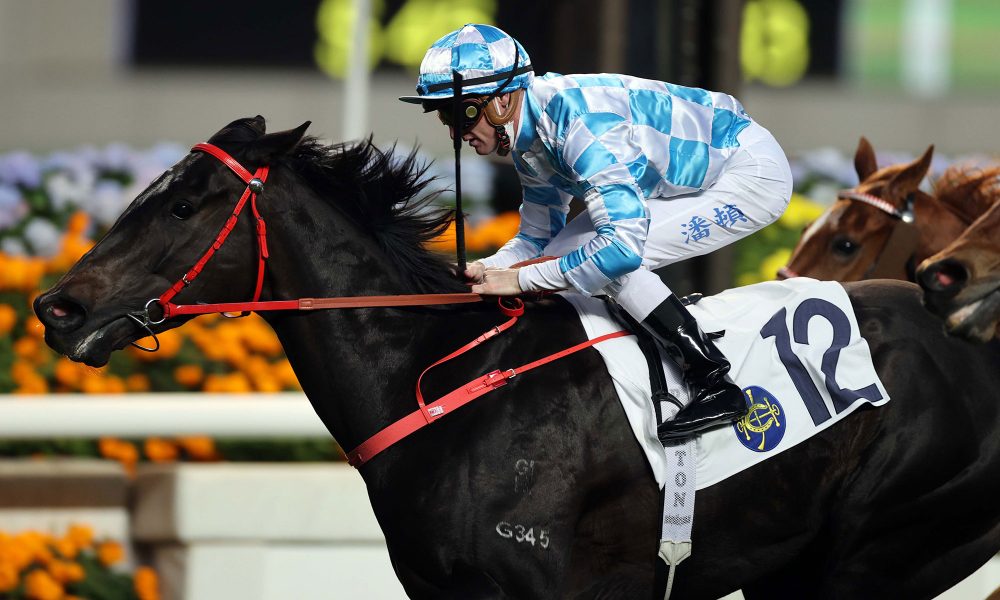 Having already soared through the grades in a short period of time, Tuchel (Redwood) returned in style at Sha Tin yesterday, scoring a stirring win in the Class 2 Yuen Long Handicap (1400m) under Zac Purton.

A prolific winner with four wins from eight starts, Tuchel – trained by John Size – made his Class 2 debut a winning one after enduring a tough, three-wide passage from gate 14 before extending to score by half a length over fellow four-year-old Galaxy Witness (Star Witness).

“I knew he had that ability but whether he was going to be able to produce that today, that was the question, he did it the tough way so that was a good effort,” Purton said.

Eligible for the 2023 Four-Year-Old Classic Series, Tuchel – sired by Redwood (High Chaparral) – is now expected to boast a rating high enough to contest the Hong Kong Classic Mile (Gr 1, 1600m) – should connections opt to send him there on January 29.

“He won well. It was a difficult day to win off a bad gate and he did it in good style.

“I don’t like making decisions after a race but I’ll have a think about it overnight and we’ll work out what we’re going to do. He’s a racehorse and there’s nothing stopping him going around, so we’ll think about it,” Size said.

Tuchel was expected to last run in October over this distance in Class 3, however, he was found to be lame and subsequently scratched.

“It was a very good effort, he had a setback with the injury, he drew the outside gate and I wasn’t able to get in, I had to cop my medicine and just try to keep him nice and balanced and in a rhythm.

“He just enjoyed being back to the races, his attitude behind the gates, during the run – he was happy to be back and when he had to dig deep, he waited for me to ask him and he went and he didn’t change his leg either, it was a very big effort after such a long time off,” Purton said.

Purton has three wins aboard Tuchel now but will instead partner Packing Treadmill (Manhattan Rain) in the first leg of the three-race HK$48 million (approx. AU$) series.

“He [Tuchel] deserves his place for sure,” Purton said.

The win was the second of a double in tandem for Purton and Size after Fast Buck (Al Maher) surged clear to claim the first section of the Class 4 Nam Sang Wai Handicap (1400m).

Ricky Yiu has confirmed that Voyage Bubble (Deep Field) will head to the Hong Kong Classic Mile after his talented youngster brushed aside distance queries with a smart victory in the Class 3 Ping Shan Handicap (1600m) this afternoon under Derek Leung.

“Classic Mile next, he should be rated 81 or 82 now. He should be competitive, front-running horses always have more of an advantage than the back-markers.

“First up over a mile and when I bought him, it was expected that he would get a mile as he has a big, long stride and is a free-running type,” Yiu said.

Voyage Bubble broke cleanly from barrier ten this afternoon but was made to work throughout after Hava Nageela pressed forward to apply pressure.

“We had an outside draw so we had to use a bit and go along but he still did the job – it was a tough win in a tough race,” Leung said.

Alexis Badel scored a first win back from injury since November this afternoon as an inspired piece of initiative from the Frenchman saw the Dennis Yip-trained Fighting Star (Not A Single Doubt) hold on to capture the Class 5 Hung Shui Kiu Handicap (1200m).

“I’m very happy, it took a bit of time but I’m happy after three meetings, I think it is already a good effort. Last Sunday [January 8] I was just coming back from injury, obviously I needed some competition and races to get going.

“Last Wednesday [January 11] I was already much better and today I feel great. I’m grateful that I was able to pick up my first win for 2023,” Badel said.

Lyle Hewitson and Chris So combined with Not Usual Star as the Zoustar (Northern Meteor) gelding nailed an unlikely win at odds of 67/1 in the Class 3 Tai Tong Handicap (1200m).

“I think Chris [So] deserves all of the credit. When this horse came to him he had a lot of issues and was completely off with an injury but he gave the horse time and put a lot of work into him,” Hewitson said.

The Class 3 Pok Oi Cup Handicap (1000m) went the way of We Are Hero (Headwater) for Hugh Bowman and trainer Manfred Man.

The win was Bowman’s 15th this term and second aboard the Australian-bred after the pair’s victory two runs ago – also down the straight at Sha Tin.

“It was no surprise, he’s really found his niche over the 1000 metres. His win two starts ago, albeit in Class 4 was pretty authoritative. He was unlucky the other day, he came here today and got a beautiful run in transit and ran accordingly,” Bowman said.

Caspar Fownes’ patience was rewarded as Daring Pursuit (Shooting To Win) nailed a tidy victory under Vincent Ho in the first section of the Class 4 Lam Tei Handicap (1200m).

“He was a bit unlucky in his first start and the team took their time with him, they didn’t rush him and we trialled him well. He’s still a very big baby, he didn’t want to come out in the straight but when I pulled him out he had a nice turn of foot again. There’s plenty to improve – he’s a nice, decent horse,” Ho said.

Jamie Richards moved to ten wins this season after Asian One (Ocean Park) broke through under Silvestre de Sousa in the Class 5 Kam Tin Handicap (1400m), giving Richards a third win from the last three fixtures.

After finishing a weakening eighth on debut in December, Fun Together (Rip Van Winkle) surprised at odds of 142/1 with victory in the second section of the Class 4 Lam Tei Handicap (1200m) under Jerry Chau for trainer Benno Yung.

Hong Kong racing continues this Wednesday with an eight-race fixture at Happy Valley.