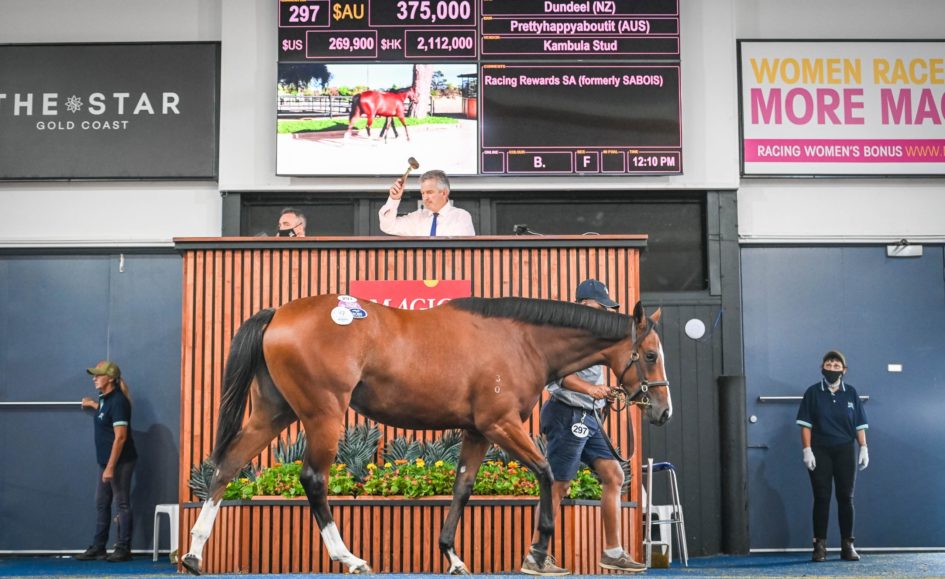 Local and interstate vendors back thriving auction as more than 1,000 entrants are reduced to 468-lot catalogue

Magic Millions released a 468-lot Adelaide Yearling Sale catalogue yesterday, a collection of horses whittled down from a record number of ‘more than 1,000’ entrants, after unprecedented demand from vendors to consign their yearlings for the March 14-15 auction.

The Adelaide Yearling Sale is the fastest growing live Australian auction, having generated growth in aggregate sales of 65 per cent over the last two years, with $20,984,500 exchanging hands in 2022, at an average of $57,809, a figure up 69 per cent on the 2020 edition of the sale.

The exponential success of the sale has attracted the attention of several new interstate vendors, with Evergreen Stud of the NSW Southern Highlands and Scone-based Toolooganvale Stud each consigning five horses for their maiden drafts in Adelaide. Holbrook Thoroughbreds return to the vendor sheet for the first time since 2018 with a seven-strong draft.

There are also strong consignments from local South Australia-based vendors, with Mill Park’s draft featuring 17 lots; Cornerstone entering a draft of 30, and Rathmore Lodge 17 yearlings, while Kambula Stud, responsible for the two highest-priced lots in last year’s sale, has elected to send all 15 of its yearlings offered for public sale this year exclusively to the Magic Millions Adelaide sale in 2023.

“I’m a very proud Adelaide person, and to go to our local sale and sell like we did last year was one of the biggest kicks I’ve ever had in my life,” Kambula Stud owner David Toole told ANZ Bloodstock News.

“We have saved everything for Adelaide this year, we’re not selling at any other sales, and it’s 100 per cent due to the success of the sale. I honestly believe in my mind that this year’s draft is better than last year.

“Interstate vendors are a huge positive for us. The interstate people are learning that the Adelaide sale is on the improve and they are bringing better horses to Adelaide. In turn, better horses attract better buyers. It’s a huge coup.”

The sale will feature an array of different sires, with 114 individual stallions represented and 13 stallions possessing ten or more yearlings in the sale. With 17 yearlings, Coolmore’s Pride Of Dubai (Street Cry) is the most represented sire in the catalogue, closely followed by All Too Hard (Casino Prince) (15). Capitalist (Written Tycoon) and Swettenham Stud’s first season sire I Am Immortal (I Am Invincible) each have 13 lots entered in the sale.

Long-serving Magic Millions bloodstock agent Adrian Hancock believes the 2023 Adelaide sale catalogue to be the strongest since a golden era of South Australian racing and breeding, more than 40 years ago.

“I’ve got no doubts that the catalogue has improved once again,” Hancock told ANZ Bloodstock News. “Since the heyday of the late 1970s, when South Australia had one of the leading sales in Australia, with champion stallions, this is the strongest catalogue with the most depth of yearlings that I’ve seen at Adelaide.

“The volume and variety of the nominations we received was beyond anything we’ve had previously. We normally get about 800 nominations, but we had over 1,000 this year. It put us under enormous pressure to select the catalogue and get the numbers back to a manageable level, but we’re very pleased with the end result.

“We use the catchphrase ‘opportunity knocks’, but in reality, that’s what this sale does. It’s a sale where everyone can come and buy a nice horse within reach of a moderate budget. There’s a yearling there for every buyer and that’s the beauty of Adelaide.”

Last year’s $375,000 top lot was a filly by Dundeel out of Listed winner Prettyhappyaboutit (Magnus). Kambula will offer her half-brother by Blue Point in this year’s sale as Lot 279.

Also within their draft are three yearlings by Vinery Stud’s first season sire Exceedance (Exceed And Excel), including a colt out of Listed winner Streetcar Isabelle (Danerich), who has already produced the stakes-winning Streetcar Stranger (Stratum).

“Our star horse is our Blue Point colt [out of Prettyhappyaboutit],” Toole said. “We’ve got a very good Exceedance filly that’s a half to Capital Legend, who the other day won his first start in Hong Kong.

“We have a good Zousain colt and a good Capitalist colt, it’s an exciting draft.”

“For a sale that averages under $60,000 – and that’s only last year – the sale achieves some remarkable on-track results,” Hancock said.

“We only sell around 450 [yearlings], so statistically the sale performs very well. That’s because you get the best of what South Australia has to offer and interstate vendors have learned that there’s no point in bringing a horse all the way to Adelaide unless it’s worth selling.

“Furthermore, with the Magic Millions raceday going to $20 million in 2025, these horses will be eligible for that and they can do it every year of their life. There’s a big opportunity for buyers there and it’s very exciting.”