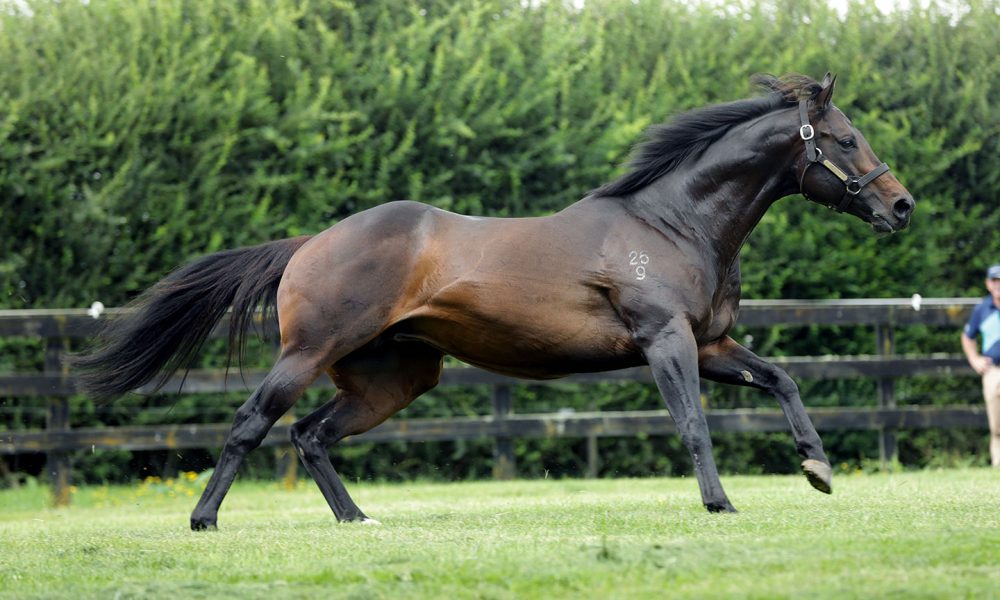 Zoustar – Silent Words (2 f ex Thatsallimsaying by Dandy Man) provided Zoustar (Northern Meteor) with a 16th individual winner from his first northern hemisphere crop when holding on to narrowly score in a five-furlong novice at Newcastle. Trained by Karl Burke, the filly idled inside the final furlong and was all out to beat Colnago (Sioux Nation) by a head at the line with a further one and a quarter lengths back to De Bruyne (Dutch Art) in third. The third foal out of the Listed-placed winning Dandy Man (Mozart) mare Thatsallimsaying, Silent Words is a half-sister to Group-placed winners Project Dante (Showcasing) and Lauded (Acclamation). Zoustar, who has had 61 starters from his first crop in the northern hemisphere, stands at Widden Stud for a fee of $198,000. He will return to Tweenhills for the 2023 northern hemisphere breeding season where he will stand at an increased fee of £30,000 (approx. AU$52,770).

Daiwa Major – Serifos (3 c ex Sea Front by Le Havre) provided Daiwa Major (Sunday Silence) with a seventh individual elite-level winner when he scored in the Mile Championship (Gr 1, 1600m) at Hanshin. Ridden by Damian Lane, the Mitsumasa Nakauchida-trained three-year-old colt ran on strongly inside the final furlong to beat Danon The Kid (Just A Way) by one and a quarter lengths, following up last month’s Fuji Stakes (Gr 2, 1600m) success. There was a further half-length back to Sodashi (Kurofune) in third. The second foal out of the Listed-winning Le Havre (Noverre) mare Sea Front, herself out of an unraced half-sister to Listed winner Mediation (Caerleon), the dam of Grade 1 winner Go Between (Point Given), Serifos is a half-brother to winner Forte Dei Marmi (Orfevre). Daiwa Major, who has had 1,248 starters, stands at Shadai Stallion Station for a private fee.

Proisir (pictured above) – Legarto (3 f ex Geordie Girl by Towkay) provided Proisir (Choisir) with a fourth individual elite-level winner from 204 starters when she overcame plenty of pre-race antics to run out an easy winner of the New Zealand 1,000 Guineas (Gr 1, 1600m) at Riccarton. Sent off the $1.35 favourite, having won her first three outings in decisive fashion, the Ken and Bev Kelso-trained filly proved difficult to load into the starting gates but showed no signs of difficulty during the race, dispatching the John Bary-trained Best Seller (Wrote) by four and three-quarter lengths with a further two and a quarter lengths back to Blue Solitaire (Almanzor) in third. Bred by Bay Of Plenty-based farmer Warwick Jeffries, Legarto was a $90,000 purchase for Phillip Brown of Ancroft Stud from Book 2 of the New Zealand Bloodstock National Yearling Sale at Karaka in 2021. Out of the winning Towkay (Last Tycoon) mare Geordie Girl, Legarto is a half-sister to winners Emanon (Burgundy) and Locally Sauced (Iffraaj). Proisir stands at Rich Hill Stud for a fee of NZ$17,500 (plus GST).

Trade Fair – Trix Of The Trade (4 g ex My Name’s Trixie by Passenger) earned his late sire Trade Fair (Zafonic) a second individual Group 1 winner when claiming the Railway Stakes (Gr 1, 1600m) at Ascot. The Colin Webster-trained four-year-old won by a length and three-quarters from Comfort Me (Playing God) with Startrade (Trade Fair) a head further back in third. Bred by Bill and Pat Robinson, Trix Of The Trade is the final foal out of My Name’s Trixie (Passenger), who died in 2020. Former Alwyn Park Stud sire Trade Fair, who has had 543 runners, died in 2018.

Camelot – Coolmore’s Camelot (Montjeu) brought up his half–century of individual stakes winners when Ritournelle (2 f ex Robanne by Paco Boy) struck in the Prix Herod (Listed, 1400m) at Saint-Cloud. Trained by Jerome Reynier, the filly was winning for the second time in four starts as she beat Got Socks (Bow Creek) by a length and three-quarters. Denver Chop (Vale Of York) finished third, three lengths behind the winner. Ritournelle was a €260,000 purchase at Arqana’s August yearling sale. Camelot, who has had 624 starters, will stand the 2023 northern hemisphere breeding season for a fee of €60,000 (approx. AU$93,7170).

Dalghar – Buoyant (4 g ex Miss Minogue by Pentire) provided Brighthill Farms stallion Dalghar (Anabaa) with a fourth individual stakes winner from 210 starters when running out a comfortable victor of the Lindauer Stewards Stakes (Gr 3, 1200m) at Riccarton, despite some early-race fractiousness. Ridden by Michael McNab for Sabin Kirkland, the four-year-old gelding missed the kick by several lengths but settled well at the rear of the 11-runner field and came home strongly on the outside to beat Kopua (Shocking) by three and a half lengths at the line. Okay Pal (Dissident) finished a further short-head away in third. Buoyant is the first winning foal out of the Pentire (Be My Guest) mare Miss Minogue. Dalghar currently stands for a private fee.

I Am Invincible – Minsk Moment (4 h ex Dancing Express by Oratorio) became the 86th individual stakes winner for I Am Invincible (Invincible Spirit) when winning the Carbine Club Stakes (Listed, 1400m) at Ascot. Minsk Moment challenged in the home straight and proved best in the run to the line, defeating Em Tee Aye (I’m All The Talk) by one length with a further three-quarters of a length back to Panzdown (Panzer Division) in third place. Minsk Moment’s dam Dancing Express (Oratorio) recorded two wins and was also runner-up in both the 2014 WA Sires’ Produce Stakes (Gr 2, 1400m) and the Champion Fillies Stakes (Gr 3, 1600m). As well as Minsk Moment, Dancing Express has also produced two-time-winning Hellbent (I Am Invincible) filly Hellavadancer, while she has a two-year-old colt by the same sire. She missed the last two seasons. Minsk Moment sold for $575,000 as a Magic Millions Gold Coast yearling and then for $400,000 as a tried horse in the Inglis May Digital Sale. Champion sire I Am Invincible, who has had 961 runners, stands for a fee of $247,500 (inc GST) at Yarraman Park.

Just A Way – Gastrique (2 c ex A Shin Epona by Curlin) provided Just A Way (Heart’s Cry) with a 13th individual stakes winner when running out a narrow victor of the Hai Nisai Stakes (Gr 2, 1800m) at Tokyo. Trained by Hiroyuki Uehara, the two-year-old colt came home a neck in front of Danon The Tiger (Heart’s Cry) with a further half-length back to favourite Hearts Concerto (Heart’s Cry) in third. Out of the winning Curlin (Smart Strike) mare A Shin Epona, Gastrique is a half-brother to winner A Shin Pixel (Epiphaneia). Just A Way has had 439 starters.

Justify – Justique (2 f ex Grazie Mille by Bernardini) provided Coolmore’s first-season sire Justify (Scat Daddy) with his sixth individual stakes winner when scoring a ready success in the Desi Arnaz Stakes (Listed, 7f) at Del Mar. Trained by John Shirreffs, the two-year-old filly came home a comfortable two and a quarter lengths clear of Blessed Touch (Girvin) with a further six and a half lengths back to Naughty Lottie (Midnight Lute) in third. The sixth foal out of the winning Bernardini (A.P. Indy) mare Grazie Mille, herself a half-sister to stakes winners Jaguar Paw (Giant’s Causeway) and Venetian Mask (Pulpit), Justique is a half-sister to Grade 2 winner Mo Town (Uncle Mo) and useful winner Champagne Lady (Uncle Mo). Justify, who has now had 61 starters, will stand the 2023 northern hemisphere breeding season for US$100,000 (approx. AU$149,820).

Rock ‘N’ Pop – Kevin Myers successfully defended his New Zealand Cup (Gr 3, 3200m) crown when he sent out Aljay (5 g ex Albacora by Lord Ballina) to win this year’s contest, having won last year’s running with Mondorani (Burgundy). Ridden by Tina Comignaghi, the five-year-old gelding was sent off the $2.70 favourite and held on well in the closing stages to deny Inmyshadow (Ferlax) by a head at the line with the pair pulling six and a half lengths clear of the third-placed Mauna Loa (Nom De Jeu). Bred by Ardsley Stud’s Jim Wallace, Aljay was originally purchased as a weanling for $10,000 by Waterford Bloodstock at New Zealand Bloodstock’s May Sale. Out of the six-time-winning Lord Ballina (Bletchingly) mare Albacora, he is a half-brother to five winners including Captaintwinkletoes (Sufficient) and Hong Kong scorer Big Quick (Falkirk). The success provided Okawa Stud stallion Rock ‘n’ Pop (Fastnet Rock) with a second individual stakes winner from 140 starters.

Sacred Falls – Aromatic became the seventh individual stakes winner for late sire Sacred Falls (O’Reilly) when winning the Counties Cup (Gr 3, 2100m) at Pukekohe. On a deteriorating track, Aromatic duelled with Self Obsession (Shocking) over the final 200 metres, with the former prevailing by a long-head. Viktor Vegas (Tavistock) finished a further half-length away in third. Purchased by Te Akau Racing boss David Ellis for $160,000 out of the Milan Park draft during Book 1 at Karaka in 2018, Aromatic is out of the Taranaki Cup (Gr 3, 1800m) winner Vickezzchardonnay (Don Eduardo). Former Waikato Stud stallion Sacred Falls, who has had 201 starters, died in 2019.

Snippetson – Sniparoochy (4 m ex Mamaroochy by Duporth) became the 15th individual stakes winner for Snippetson (Snippets) when landing the Jungle Mist Classic (1200m) at Ascot. The four-year-old now has two wins from two starts this preparation, after also winning over 1000 metres at Ascot on October 29. Ridden by Brad Parnham for Simon Miller, the four-year-old came home one and a quarter lengths clear of Baby Paris (Playing God) with a further two and three-quarter lengths back to Express Time (War Chant) in third. Sniparoochy is now the winner of eight of her 17 starts and has earnings of $618,216. The mare was a $67,500 buy for Millfields Park from the Scenic Lodge draft at the Magic 2020 Magic Millions Perth Yearling Sale. She is the second and final foal out of three-time winner Mamaroochy (Duporth). Snippetson, who has had 765 runners to date, is advertised at $7,700 (inc GST) at Scenic Lodge Thoroughbred Stud in WA.

Snitzel – Ethereal Star became the 129th individual stakes winner for Snitzel (Redoute’s Choice) when landing the Challenge Stakes (Listed, 1100m) at Pukekohe. The Andrew Forsman-trained two-year-old challenged three wide into the home straight before finishing best of all to defeat Balance Of Power (Almanzor) by one and three-quarter lengths, with Luberon (Embellish) third. Bred by Lib Petagna, Ethereal Star is out of VRC Oaks (Gr 1, 2500m) placegetter Eleonora (Makfi) and was a $600,000 purchase out of the Blandford Lodge draft by Forsman in conjunction with agents Andrew Williams and Bevan Smith during the Book 1 Sale at Karaka in March. Snitzel, who has had 1,385 runners, stands at Arrowfield Stud for a fee of $220,000 (inc GST).

Sweynesse – The Manfred Man-trained Lucky Sweynesse (4 g ex Madonna Mia by Red Clubs) scored a first stakes victory in the Jockey Club Sprint (Gr 2, 1200m) at Sha Tin, providing Sweynesse (Lonhro) with a fifth individual stakes winner. Ridden by Zac Purton, the four-year-old gelding led inside the final 150 yards and kept on strongly to beat Lucky Patch (El Roca) by a neck with the pair finishing a length clear of the third-placed Duke Wai (Per Incanto). The second foal out of the Listed-winning New Zealand mare Madonna Mia (Red Clubs), a half-sister to four-time Australian winner Rambling On (Testa Rossa), Lucky Sweynesse is a brother to Queensland Oaks (Gr 1, 2200m)-placed winner Signora Nera. Sweynesse, who has had 106 starters, stands at Novara Park Stud for NZ$9,000 (plus GST).