25th anniversary of the new Best Bets brings back memories 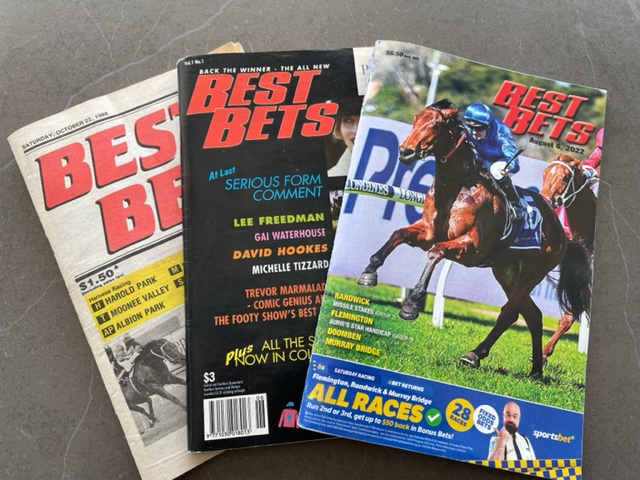 Please forgive me the following indulgence but I must note that last Saturday marked the 25th anniversary of the birth of my baby without acknowledgement, alas, from her current custodian. What a (tongue in cheek) affront.

No, not any of my children – they’re much older than that – but of the first edition on Saturday 9 August 1997 of the revamped Best Bets form guide, after it had been sold by a Murdoch subsidiary and landed in my care.

Working from a dungeon in the basement garage of 12 Strathalbyn Street, East Kew, which had only one redeeming feature – the walk of just 110 metres to the Harp of Erin Hotel – a small group of us hoped to revolutionise form guide publication. I think we did.

Best Bets was originally launched in 1963 under the editorship of Syd Brennan and the convenience of its pocket-size made it immediately popular, but little had changed in content and presentation over 30 years.

Syd’s son Craig, who’d been working with the “old” version, stayed on board as did racing journalism stalwart Ken Coram with Mike Ko’Cass contributing from Sydney and Errol Harris from Brisbane.

Former AFL footballer Mark Hunter was drafted, along with Howard “The Duck” Walter and   Brendan Tupper – who were disciples of Hong Kong David Price’s school of form; great judges all and still prominent in the game. Chris Beaumont, who remains unrivalled as an analyst of Sydney racing, was recruited from obscurity on the recommendation of Adam Hamilton.

The extraordinarily complicated task of altering and automating the content, plus design, fell to a young man named Blair Shaw who knew absolutely nothing about horse racing. His reward, aside from personal satisfaction, it might be said came some years later when – at Coram’s insistence – he bought a 10 per cent share in the 2013 Victoria Derby winner Polanski for just $400. I must have been out of the office that day.

It was an exciting time launching a form guide which showed, in colour, the silks for every runner in Melbourne, Sydney, Brisbane and Adelaide. Now standard practice, then it had only happened for the Melbourne Cup.

We resolved to rid the world of the inane horse comments, which had featured in form guides for 100 years. You know, the likes of “bears watching” which was meaningless and conjured up an image of a row of teddy bears with binoculars.

My own favourite was the perennial “prefer over jumps” for any hurdle or steeplechaser running on the flat, notwithstanding that its jump form might have read ‘fell, lost rider and last’.

We included a form guide first with a video comment summary of each run, addressed the issues of rail and draw bias and packaged it all in a guide which was more legible than any other.

We also went all out with celebrity and high-profile racing endorsement. I genuinely cannot recall if we paid all these people or worked contra deals, but the first edition featured tips from Lee Freedman, Gai Waterhouse and the Footy Show’s Trevor Marmalade.

Best Bets had traditionally run columns from the great, and even then, veteran race callers John Russell, Des Hoysted and John O’Neill.

I recall Hoysted, who was a delightful fellow, rang me before the new publication went to press and very sheepishly suggested a pay rise might be in order as they’d never had one. “Oh, what are you paid?,” I asked. “Twenty dollars a column,” he said.

I had to stop myself from saying “you’re kidding”. We trebled it I think which I concede, looking back, probably makes me more miserable than magnanimous.

The old Best Bets featured numerous ads from tipping services, including one which boasted a “miracle computer”, another “instant electronic winners” with an “unconditional money back offer”, and another which promised “betting secrets exposed”.

These operators were not necessarily charlatans but, of course, were no more likely to tip a winner than you or me. They simply operated on the theory that anyone subscribing, for the first time, on a weekend when they won would be hooked – at least – for a time. A losing day, well, they were lost forever.

I was opposed to running these ads, but we relented, for a time, after I was reminded that they appeared strictly on a cash-with-copy basis which meant no bad debts. They did pay which, of course, means they were making money. There’s one born every minute they say.

These days, they’ve been replaced by corporate bookmakers’ sponsorship and advertisements. I’ll leave it to you to decide if there’s any great difference.

Flash Freddie, Sunshine Sam, Madam X, Percy The Punter and, best of all, Yours Stars Tell with Arthur Bowman (no relation to Stuart or Ken whose surname is without the W or maybe they just deleted it later) offered tips.

Bowman was paid, believe it or not, for horoscope–inspired gems such as “look for favourites with lucky sounding names”. His column, I reluctantly admit, stayed for a while in the new version, as I was advised that the phones would not stop ringing if I left it out!

There was much, aside from the stars and the mysterious Madam X (who was, of course, fictitious), which made us laugh. In particular, the time when Mark Hunter entirely dismissed the prospects of a horse called Ambroc in a race at Morphettville.

Mark’s comments were accurate and illuminating, but also pointed and opinionated with a favourite being “trainer clearly doesn’t own a racing calendar” when a horse was poorly placed.

In the case of the moderately performed Ambroc, Mark wrote: “$1.80 the Ambulance, $1.80 Ambroc, take your pick”. A deluge, combined with significant scratchings on race day, altered the complexion of the contest and – needless to say – Ambroc duly won at 40/1.

Adelaide race caller Terry McAuliffe took much delight in lampooning Best Bets’ assessment of the horse while the Adelaide Advertiser ran a two-page spread on the horse Best Bets said couldn’t beat home the Ambulance. It was the best publicity we ever had and, ironically, Best Bets would eventually become the Adelaide racebook.

All-in-all, it was great fun to be a part of the new Best Bets, notwithstanding the pressure of having less than two hours to collate the entire magazine after acceptances were declared (which we eventually pressured the racing authorities to do a day earlier).

Your fate was entirely out of your hands after you’d gone to press with any hiccough in the printing, transport and distribution process a nightmare if it meant delivery was not achieved by Friday morning.

We quickly learned that the despatch of air cargo was entirely at the discretion of the captain of the aircraft and off-loading could not be insured against. The captain could jettison any amount of weight, if required, before takeoff. Having the weight clearly marked on our bags was not a good idea.

We were, early on, frequently late, but Best Bets had such a fiercely loyal customer base they would often ring up to complain but invariably apologised for doing so. Price rises invariably passed without negative comment.

If you had to have your Best Bets, you simply had to have it… as did the infamous Mike Bastion, who wanted a dozen copies delivered by noon Friday to – Hong Kong!

Best Bets, over the years, provided a start to many who now have a profile in the media-tipping world. None more so than David Gately who would ring, almost on a weekly basis, chasing employment. Fair play to him, as he eventually threw in his real job to accept, initially, very modestly paid casual employment at Best Bets.

I felt the need to reminisce and amuse some former colleagues with “ancient” photos, so, again please forgive the indulgence.