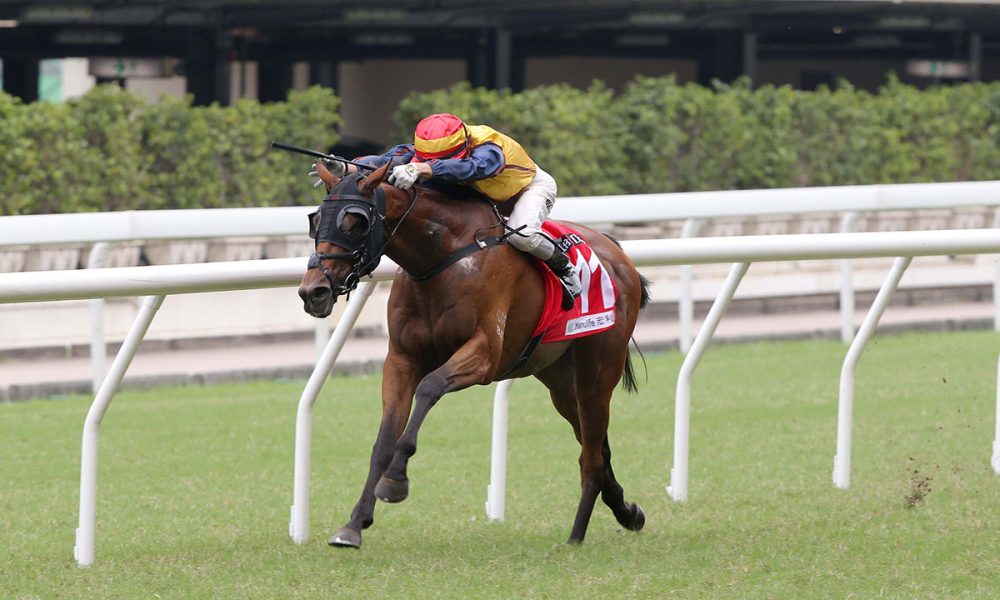 Jerry Chau’s virtuoso win aboard God Of Dragon (Red Dazzler) at Happy Valley on Sunday was ‘only’ a Class 3 handicap, yet it emphasised the exciting development of the young rider whose emergence is not only down to astute coaching of latent ability but also part of a deepening confidence around Hong Kong’s cohort of ‘local’ jockeys.

Chau dropped his mount to the field’s tail at the outset of the 2200-metre handicap, bided his time and advanced silkily along the inside rail, holding his nerve like an old hand. He was rewarded with an unimpeded sluice through to the lead as every other horse and rider swung wide off the C+3 course’s home turn as if eager to catch a tram on the Wong Nai Chung Road. It was not the kind of savvy ride usually associated with a jockey just six race meetings out of his apprenticeship.

There are currently 23 jockeys on the Hong Kong roster. Twelve are expatriate or ‘Club’ riders and the remaining 11 are those known colloquially as ‘local’ jockeys: Hong Kong-raised riders who were recruited and developed through the Hong Kong Jockey Club’s apprentice jockey school.

There was a time not long ago when being an apprentice school graduate pegged a rider as the ‘poor man’s’ option – the outstanding Tony Cruz excepted – but that mindset has receded in recent seasons. Down the order, Keith Yeung ticks along, and while difficulties still remain for the likes of Alex Lai, Jack Wong, Victor Wong and Dylan Mo, all plugging away to fill the making-up-the-numbers roles vacated by the likes of Alvin Ng and Eddie Lai – as well as any number of unsuspecting fleeting expats – there is nonetheless a sense that, even in the age of Zac Purton and Joao Moreira, the best of the ‘local’ lads are holding their own.

“We all know we’re good riders,” Ho told Asia Bloodstock News. “We’re definitely not bad riders. I think in the context of the world we’re pretty competitive and Hong Kong has always had a high level.”

Ho’s rise to being Golden Sixty’s partner has been well-documented and features heavily his work ethic, focus, good character and commitment to self-betterment. Chau, too, by all accounts, was a model apprentice and is on his way to being a smart jockey under the continuing mentorship of Douglas Whyte, an icon among Hong Kong horsemen.

“Douglas is a great mentor to Jerry,” Ho observed. “He knows this generation of riders, he was dominant for 13 years so he knows how everything works, the whole system, the track conditions, he’s ridden against a lot of the riders here, so he can teach Jerry a lot. It means Jerry can skip a lot of mistakes himself, it’s like taking a short cut.

“And Jerry is smart enough to know what to do. He’s a good rider, he’s improved a lot and, for sure, he will be one of the best local riders. He also had Felix Coetzee at the apprentice school, teaching him how to ride when he first started. The whole system is improving.”

Whereas past apprentices in the most recent decade like Dicky Lui and Kei Chiong fell by the wayside quickly – Lui having been pitched in too soon and then found wanting, and Chiong, according to the official line at least, choosing to retire due to a debilitating finger injury – Chau looks set to make into an established name alongside Ho, Leung and Chadwick. And that is no mean feat in a realm so beholden to the fickle vagaries of fashion and form, and so dominated by Purton and Moreira.

Chadwick believes the changing face of the Hong Kong racing scene is a significant factor in enabling the current local bloc of riders to hold their own. He and Ho right now sit co-fourth in the premiership behind the big two and the perennial third, Karis Teetan, while Leung and Chau are next in the order, with Blake Shinn breaking the sequence to Poon in tenth position.

“Over the last few seasons, the roster has gone through a massive change in riders. When I started, we were against those veteran riders who had a solid support base,” Chadwick said, noting that Brett Prebble, Gerald Mosse, Olivier Doleuze, Coetzee and Whyte have now departed the arena.

“We’ve been riding here so long; myself, Derek and even Vincent, we’ve been riding with Zac and Joao and those other veteran riders. They all had massive CVs when they were here so we came through with a nice grounding of race riding to learn off.

“What most trainers have realised, I hope, with this Covid and the restrictions on foreign riders coming in, is that we are very reliable and very good riders in our own right. It comes down to support but I think people have realised that some of the local riders have been around a while, know the ins and outs of Hong Kong racing and know how to ride, that we’re capable if we’re given the chance and I think this is what we’ve been seeing a bit more.”

When Chau reached the graduation benchmark of 70 wins on October 6, he did so in a faster timespan than anyone bar Chadwick, a shooting star in his time, who by age 22 had claimed back-to-back wins aboard California Memory (Highest Honor) in Hong Kong’s flagship race, the Hong Kong Cup (Gr 1, 2000m). But his career took a dip over the next few years

“Injuries stopped my ascent,” Chadwick said. “You can’t be out injured in a place like this and then keep the support when you get back. People are too fast to get on your horses so you’ve got to be active all the time.”

Over a three- or four-season span, Chadwick broke his hand and his foot and injured both his anterior cruciate ligament (ACL) and lateral collateral ligament (LCL).

“With the hand I had restricted movement and couldn’t grab hold of the reins properly and do those hand movements, so I was powerless in one hand. With my foot, it was close to the irons so there was too much pressure in my foot and I couldn’t ride out properly, my balance was askew,” Chadwick explained. His ACL was reconstructed but the LCL had to heal naturally and that took time.

“It’s worse when it’s not in one go, because when you come back, you’re riding rubbish and trying to get back on better horses and it can take a while. Then you’re out again with another injury and you start again.”

That is the case for jockeys everywhere but Hong Kong-based jockeys feel those issues more keenly due to a small pool of horses, trainers and owners and two meetings per week. There is no going off to a minor venue for easier pickings to get rolling again, and, with a three- or four-day wait between meetings, momentum is tough to build.

The ‘local’ riders know the state of play and understand as well as any the difficulties of trying to get on a good horse and staying aboard. Leung famously rode Beauty Generation (Road To Rock) to three wins through the backend of 2017, culminating in the future champion’s breakthrough win in the Hong Kong Mile (Gr 1, 1600m) but defeat at his next start saw connections switch to Purton and the rest is history.

“I think 70 per cent of the time now we can keep the rides but then sometimes we can’t,” Ho said. “I think it means we cherish those rides well and do our best in every race because most of the time we only have one chance, one shot, and that makes us improve. It’s not like we make a mistake and they keep us on the horse. Sometimes we’ll even win and they still take us off, so we treat each ride as if it’s the final chance.”

There is a camaraderie – born of shared heritage, language and professional experience – among those who passed through the apprentice school, a connection that is not felt across the Hong Kong jockeys’ room as a whole, which traditionally has been a tough environment of vying rivals, not uncommonly described as “cutthroat” and “ruthless”.

“We have a great energy in the jockeys’ room between us (the local riders) and whoever of us wins, we’re happy for them. That good energy in the room is really important, I think,” Ho said.

Chau is thriving on the back of that energy, which his seniors have generated, and the hope among the group is that it will continue through the next wave of youngsters, with Ellis Wong, Angus Chung and Peter Lui being the latest apprentices sent to Australia to try and prove themselves ready for a tilt at the Hong Kong crucible. Word has it the trio already views Chau as an inspiration.

“It’s important to show the next generation of apprentices that it’s possible to achieve anything,” Ho added.