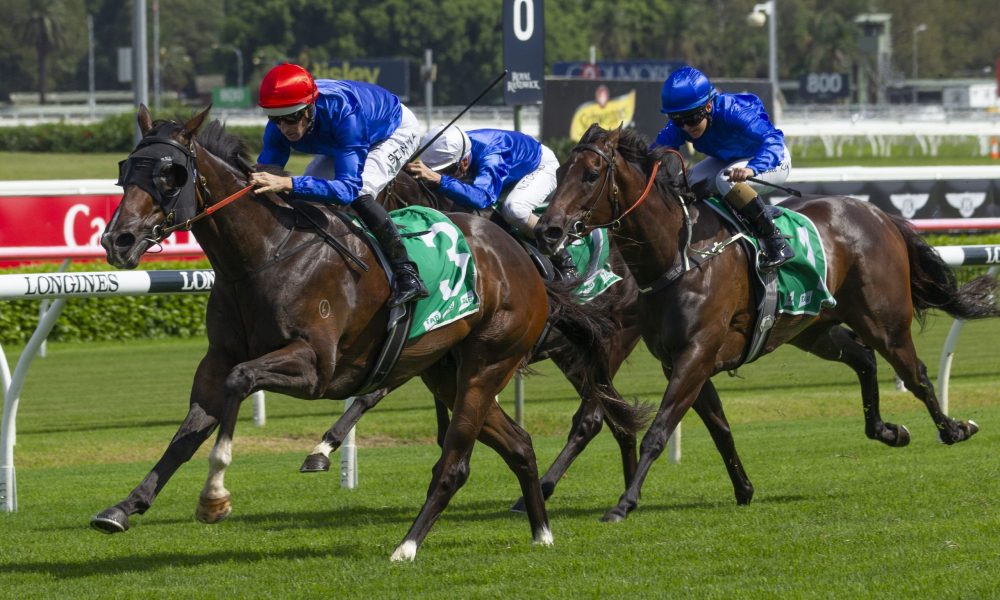 A cracking mid-race pace set by the free-running filly Flit (Medaglia D’Oro) turned Saturday’s $5 million All-Star Mile (1600m) at Caulfield into a stern test, perhaps bringing about the defeat of the favourite Alligator Blood (All Too Hard) who missed a place for the first time in his career.

“Flit wants it over and done with,” was the appropriate remark by track commentator Matthew Hill as the filly was tearing away in front.

The Godolphin-raced filly, winner of the Thousand Guineas (Gr 1, 1600m) at Caulfield in October, who now races in blinkers, worked across from her outside barrier (15) to lead, but then proved difficult for experienced rider Damian Lane to rate as she soon established a clear advantage over the field.

Those immediately chasing her in second and third places being the Group 1 winners Streets Of Avalon (Magnus) and the favourite Alligator Blood.

At that point, Alligator Blood and Streets Of Avalon were reeling in Flit, with the favourite hitting the front at the 300 metres before his efforts told and he faded to finish tenth, with Streets Of Avalon tiring for 12th and Flit dropping out to finish 14th and second-last.

The winner Regal Power (Pierro) was suited by the tempo, a WATC Derby (Gr 2, 2400m) winner who had been nicely rated by William Pike back in fourth place that fought back to win by three-quarters of a length from his late-closing stablemate Superstorm (Sebring).

While Superstorm, who was runner-up to Alligator Blood in the recent Australian Guineas (Gr 1, 1600m) at Flemington, returned the fastest closing sectionals of the race in coming from near the tail of the 15-runner field.

Third was the multiple Group 1-winning mare Melody Belle (Commands), who finished a half-length further back after travelling in sixth spot on the rails before battling on well for the minor placing at her second run back.

Earlier in the programme, the Levi Kavanagh-trained gelding Excess Funds (Rubick) stamped his potential in winning the $500,000 Inglis Dash (1100m), for three-year-olds.

Excess Funds settled in fifth place under Hugh Bowman behind a quick pace, before going on to win by a length and a quarter from the Peter and Paul Snowden-trained colt Wayupinthesky (Snitzel) in the good time of 1:03.27 (11.50 200m rate), equivalent to 1200 metres in 1:09.02.

Other juveniles to impress on the watch on Saturday included the Ciaron Maher and David Eustace-trained colt Prague (Redoute’s Choice) who tracked a quick tempo before taking out the Pago Pago Stakes (Gr 3, 1200m) at Rosehill.

Racing on a Soft 6 track in one of the early races at the meeting where continuous rain resulted in the latter races being downgraded to Heavy 10, Prague showed determination under Tom Marquard to defeat Kumasi (Snitzel) after quite a battle in the straight.

Despite the affected conditions, the race featured a quick mid-race section of 46.71 (from the 1000m to the 200m) set by the leader Postcode (Vancouver) who subsequently tired for fifth.

The third-placed Team Hawkes-trained colt Swerving (I Am Invincible) also deserves highlighting after coming from back in sixth place on the rails to take the minor placing in Group class when having only his second race start.

The Godolphin-raced filly Thermosphere (Exosphere) stepped up quickly in class after winning a two-year-old maiden (1300m) at Newcastle-Beaumont on February 27, when having her third start and recording a good win in the Magic Night Stakes (Gr 3, 1200m)

After settling just beyond midfield, she improved behind runners nearing the turn, got into clear running at the 200 metres, and then came with a strong late run to win by a long neck.