A dream result for family-run farm 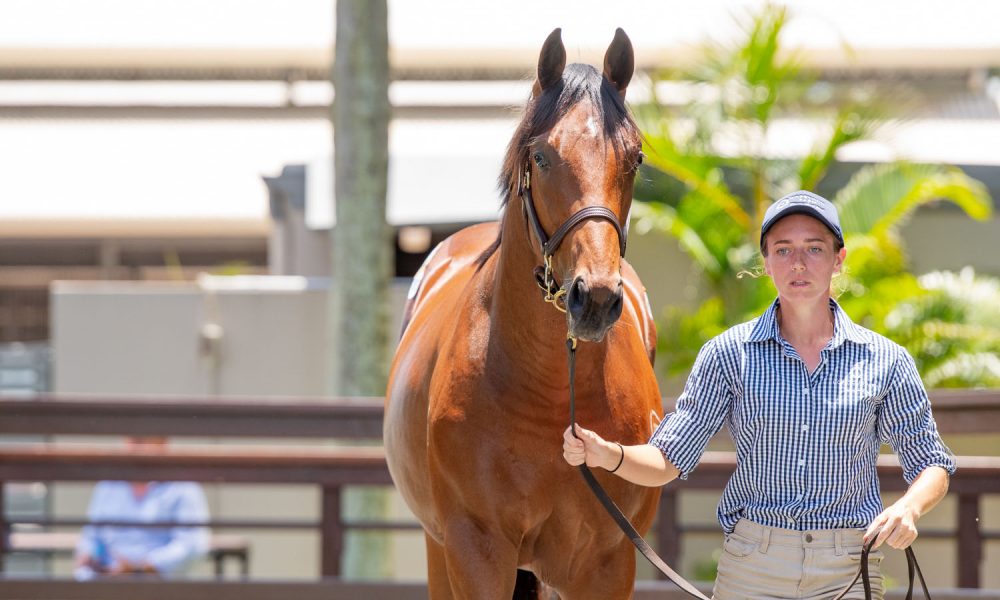 “Dad, no one knows who we are. You’ve got to raise our profile!”

If you were at the Magic Millions this week, wandered away from the big hitters and their seven-figure colts, through the gates and across the road to the fittingly obscure sounding Stable X, you might have happened upon the family from Hopetoun Farm.

It sounds a bit like the Little House On The Prairie. In reality it feels something like it too.

They’re not exactly household names, dwarfed by the Newgates and Widdens, and even sale neighbours like Twin Hills and Edinglassie. It’s likely the second thing people asked, after questions about the horses, was to enquire about the farm, which may have prompted the words above from 12-year-old Olivia Webster to her father Murray.

But what happened on the last day of the sale should go a long way towards addressing her wish.

Beforehand, Hopetoun sold a Showtime (Snitzel) filly for $15,000. Afterwards, they sold a Headwater (Exceed And Excel) colt for $17,000. That sounds what you might expect of a small farm amongst still more bigger rivals on the Darling Downs. But in between those lots, they walked out their colt by first-season sire Performer, from a two-time winning Lonhro (Octagonal) mare, But Perfect, who was bought in-foal for $7,500, and he left minutes later a $210,000 horse.

It was a grand bit of business for the 39-year-old Murray, who runs the five-year-old stud with help from wife Kim, budding pedigrees expert Livvy, eight-year-old son Sam and even three-year-old Billy.

And it was deserved reward for the effort put in since Murray leased Hazelwood Stud to pursue his passion – on a steep learning curve.

There’ve been times, only a couple of years ago, when Murray and Kim have driven to a sale wondering if it ought to be their last. Much changed yesterday, when Gold Coast trainer John Morrisey bought Lot 1087.

“A sale like that is huge for us,” Murray told ANZ Bloodstock News. “In any business cash flow is king. This keeps you going, pays our service fees, and we don’t have to trade as hard with our weanlings this year. We can keep a few for yearlings, so it relieves a lot of pressure.”

Webster isn’t from an equine background. He might’ve become a fifth-generation cattle farmer but decided to go into building. He’d always liked horses, from the few stock animals on the farm and then from following racing, and eventually his construction company allowed him to branch into thoroughbred breeding.

His family hails from near a Queensland town which started out as Hopetoun, before confusion with another one in Victoria – and a lot of mis-delivered mail – prompted a name change to Kilcoy.

“We started Hopetoun Farm from scratch,” Webster said of his 550-acre property. “We had four or five broodmares and a couple for clients, and we’ve built it up to about 30 broodmares now, and a stallion.”

The sire is Goodfella (Snitzel), a Listed winner who was twice second in lucrative Magic Millions races, and who covered 61 and 45 mares in his two seasons at stud for a $4,400 fee.

“It’s good for us. I wanted to buy a cheaper stallion so I could learn, and we’ve learnt a helluva lot,” said Webster, whose farm numbers exactly one staff member. “Next stallion we get, we’ll get a first season sire and raise the bar a little bit.”

When Webster launched into this field, the first horse he bred was named, and was, Pure Luck (Sidereus). He was by an obscure Queensland-based stallion out of a mare who won one from 19 in low, low company.

Turned out he could run a bit. He took Australia’s first two-year-old race of the season, Toowoomba’s Pat O’Shea Plate (1000m), and his fourth and fifth starts at the Gold Coast and Rockhampton, which was enough to prompt the proverbial call from Hong Kong and a big kaching.

“He was by Sidereus out of a mare called Tatt’s Lucky that won a race at Dalby,” Webster laughs. “I thought ‘How much fun is this?’ But it was a bit of luck, that one.

“That’s where I got started, but it’s been tough, it’s hard. There’s years where you’re scraping. You breed all your mares, then you’ve got to pay your service fees after Easter, and you’re scrounging for every cent. You’ve got to go to good stallions, buy good mares to improve your herd, and it’s tough to get going.

“On our budget you’ve got to look for value. It’s there, you’ve just got to do your work and find it. Every sale, I spend so much time identifying and valuing horses, and if they tick all my boxes of type and pedigree, go for them.”

He also has a couple of young and eager helpers.

“Sammy’s front of house here and Livvy’s on the broom, and they also do the pedigrees and help me with the matings, sniffing out a good deal online or here at the sale,” Murray said.

“Livvy loves it. She’s really good. She gets the magazines and goes through it all. She’ll look back five or six generations. She’s got her little things that she looks for and throws them at me, though sometimes I mightn’t agree.”

The farm’s brand is MKP, which younger family members insist stands not for “Murray and Kim Pastoral” but “Murray and Kids”. Either way, this dad is living the dream, and his happiness, and the family’s unity of cause, is evident in spades (sometimes literally).

“I always wanted to breed something,” says the archetypal friendly Queenslander. “Thought I’d be breeding cattle by now, but with horses, if you get it right you can get some really good returns.

“And it’s great having horses with a young family. There’s so many valuable lessons: you don’t always win when you work hard, but when you do win it’s because you’ve worked hard. You do the wrong thing around a horse and you’ll get kicked, and you’ve got to feed them twice a day.

“There’s no iPads in our family. The kids are active, and it’s great they’ve got a passion.”

Last year, Webster sold a Saxon Warrior (Deep Impact) weanling colt for $100,000 and a Russian Revolution (Snitzel) filly for $80,000. This week, he watched Coolmore and Widden sell them for $260,000 and $140,000. Yesterday’s sale means he’ll now be able to concentrate on the more lucrative yearling market.

He also sold a Smart Missile (Fastnet Rock) colt here last Tuesday for $55,000. He suggests maybe this and the Performer were in the wrong books, but you won’t hear him complain.

“Magic Millions have been fantastic for us,” he says. “For a young fella – I’m no one in the industry – so for me to come from nothing and start to gather momentum, you need their support, and they’ve been great.”

Things appear headed the right way for the Little Farm On The Downs. Which is just as well, for what dad wants to disappoint their 12-year-old daughter?