A helping hand to your friends 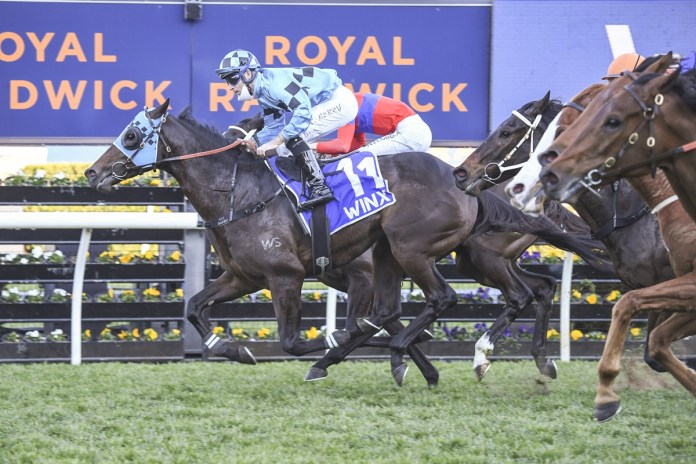 One could imagine the conversation at dawn on Sunday between Waikato Stud barnmates Savabeel (Zabeel) and Tivaci (High Chaparral) to have been quite the jovial one after another week of notable successes shared between the stud stalwart and his junior colleague.

At different ends of the career spectrum they may be, however, the apprentice would be pretty thankful to the seven-time champion sire Savabeel, who is certainly providing the words of wisdom, as well as having provided a significant helping hand through his mares.

First there was Celevacci, the one over in Perth out of Savabeel’s Celebrate, who showed some real fight in the straight, while John O’Shea’s filly, Mascherata, out of Sydney winner Fancy Dress, she could well be heading for some stakes races.

Then there’s the stud’s own filly, Never Been Kissed at Hawkesbury last Thursday. The first foal out of Movie, produced a pretty zippy winning time on what was her first start.

In return, Savabeel would have every reason to be satisfied with his Winx Stakes (Gr 1, 1400m) winner Mo’unga, who could be that little bit special, while the now Chris Waller-trained Atishu measured up to her Australian counterparts when winning the Benchmark 88 Handicap over 1400 metres on the Randwick undercard. She will no doubt progress through the grades, proving her stakes wins at Riccarton last autumn to be no flukes.

Mo’unga had to find plenty yet found the necessary to prevail against a top class field in the season’s first Group 1 at Royal Randwick on Saturday.

In a thrilling finish, Verry Elleegant (Zed) handed him all sorts of pressure but the four-year-old entire dug deep and was able to hold out the eight-time Group 1 winner even though she was coming back at him near the line.

If the Winx Stakes was the appetizer, the main course throughout the spring should be a feast. The assembled field was a cracker with a half-length separating the first five home.

Atishu’s fine effort in the Darwin Turf Trophy was also noteworthy. Standing up the leader three lengths at the 300 metres she lowered her head and lengthened stride impressively over the final 150 metres to make it five on end. Chris Waller, her new trainer, knows the Savabeels well.

Waller was responsible for Mo’unga’s early career and knew a year ago what the colt might be capable of producing. Last September, Mo’unga, then unbeaten in three starts, was still cooling down from bagging his maiden stakes win in the Dulcify Handicap (Listed, 1500m) when Waller was tagged by the media for a comment.

He had this to say about a tilt at the Golden Rose (Gr.1, 1400m): “He’s not seasoned enough for that type of racing just yet in my opinion but gee, he is going to be something very special to look forward to,” Waller said. “The plan was always the Spring Champion. I think he’s got a great future and we don’t need to bottom him out too quickly.”

Interestingly, Mo’unga did not accept for the Spring Champion Stakes (Gr 1, 2000m), after all.

Instead, his next raceday appearance was at Caulfield for the Caulfield Guineas (Gr 1, 1600m), won by Ole Kirk (Written Tycoon).

He did not look happy at his first go left-handed on a tricky Caulfield layout, yet ran home reasonably well from last for seventh when the race was over.

Perhaps Waller was right? The heat of a Group 1 at your fourth career start might have been a bridge too far at that time.

Even more interestingly, two months later came the announcement that Mo’unga was to have a change of stable.

Returning the following February, now trained by Annabel Neasham, Mo’unga raced much handier in the CS Hayes Stakes (Gr 3, 1400m) at Flemington, doing his best work at the end for a well fought, fresh-up third.

Back to right-handed at Randwick, for the Randwick Guineas (Gr 1, 1600m), we saw the real Mo’unga and who could forget his barnstorming run down the middle of the track from an impossible position at the 200 metres to almost overhaul Lion’s Roar (Contributer), whom he had defeated when they clashed at Newcastle the previous August.

After such a strong finish Mo’unga was installed as favourite for his next race, which resulted in a decisive victory in the Rosehill Guineas (Gr 1, 2000m), enjoying a clear run in the straight this time to claim his first Group 1. Adversary Lion’s Roar was a good fourth.

Had Mo’unga remained in Waller’s care, and if we take his comment about “bottoming out’ seriously, it is doubtful that he would have been assigned his next two races, arguably two of the toughest races that any horse might face, especially for a three-year-old and more especially as the two races were just seven days apart.

The Doncaster Mile (Gr 1, 1600m) and the rich Queen Elizabeth Stakes (Gr 1, 2000m) were the two and, to be fair, the youngster tried his best in the Doncaster but had way too much to do from last into the straight. In the Queen Elizabeth he again tried hard but was up against some of the best in the world in only his second preparation and ninth career start.

To the horse’s credit, he is very determined and full of quality with a great turn of foot. The Winx victory indicates that the next couple of months look very exciting for us racegoers.

As Rowe points out, Savabeel’s Embellish and Cool Aza Beel are being given their chance at stud but Savabeel entires are few and far between.

Of Savabeel’s 24 Group 1 winners, ten are males but only four are entires: the two aforementioned, as well as Mo’unga plus The Chosen One. The latter, now a six-year-old, remains in training with nominations for this spring’s Melbourne Cup (Gr 1, 3200m) and Caulfield Cup (Gr 1, 2400m).

The Savabeel-O’Reilly cross accounts for six of Savabeel’s Group 1 winners including the above-mentioned Embellish, whose first crop will be showcased at the 2022 NZB Karaka Yearling Sales.

The next sire, also a Waikato Stud stalwart, is Centaine (Century) who may not have a General Sire Championship to his name but does own six Broodmare Sire titles to go along with two Champion Two-Year-Old Sire crowns. Centaine sired 61 stakes winners.

Mo’unga’s third dam, Seraphic, is by Imposing (Todman), a four-time Group 1 champion who took out the 1979 Stradbroke Handicap (Gr 1, 1400m) as a three-year-old then returned at four to bag three further elite Group 1 races including the Epsom Handicap (Gr 1, 1600m) and the George Main Stakes (Gr 1, 1600m), both over the Randwick Mile.

Mo’unga’s fourth dam is Great Northern Oaks (Gr 2, 2400m) winner Torquay (Wharf) and Waikato Stud became involved with the family via her daughter Seraphic from 1993. Seraphic was the best of Torquay’s nine winners and one of two stakes winners. The other, Queen Of Kiwi (Kinjite), was a Listed winner in South Africa.

Seraphic’s feature performance was a Group 3 at Rotorua, but one of her five stakes placings was to run second in the Air New Zealand Stakes (Gr 1, 2000m).

At stud, she did not enjoy quite the same success (stakes winners-wise) as her dam and, in fact, was sent to Australia after foaling Mo’unga’s granddam Cenphic (Centaine). Her best winner there was Tornadic Sky (Hurricane Sky) who won eight times including three in Brisbane.

Chintz has since foaled a Group 2 winner of her own, Wakefield Challenge Stakes (1100m) winner Not An Option (Not a Single Doubt). He has four wins under his belt and was a last-start third in the Winx Guineas (Gr 3, 1600m) on the Gold Coast last month.

Cenphic was a minor winner in Australia and not only produced Chandelier, but also her sister Irlanda (O’Reilly), the winner of six including three stakes, headed by the Auckland Thoroughbred Breeders’ Stakes (Gr 2, 1400m) at Pukekohe.

And so, to Chandelier herself. Mo’unga is one her two winners to date and has since foaled a now as yet unnamed two-year-old sister as well as a yearling brother to Mo’unga. The latter is expected to be presented at next year’s NZB Karaka Yearling Sale, and quite a character he is, too.

Kiwi Chronicles had the privilege of meeting him in March while taking photos of several of Waikato Stud’s Ardrossan (Redoute’s Choice) weanlings. He is a really nice colt, a little cheeky and mighty curious, nudging me along from behind while I was trying to take photos with my tablet. He just had to find out what I was doing and was not shy at all. He had no idea that his big brother had scored the Rosehill Guineas the previous Saturday.

Chandelier, last season, was covered by and is due to foal to Super Seth (Dundeel).

As a dual Group 1 winner over seven furlongs and a mile and a quarter, Mo’unga has much going for him regarding stallion potential and which he can certainly enhance this season. The sires in his close-up bloodlines are flawless and his own racing ability means that instead of being rushed off to stud, we get to see him in action.

Did one get away?

The reference is to the brilliant Xtravagant (Pentire), who sired He’s Xceptional, his first stakes winner at Moonee Valley on Saturday.

Two of Xtravagant’s performances remain fresh in the minds of many racegoers, mainly due to the way he completely blitzed his own age group in the New Zealand Two Thousand Guineas (Gr 1, 1600m) then showed up in February against the older horses in the NRM Waikato Sprint (Gr 1, 1400m), where he utterly destroyed his well-credentialled opponents.

In the Guineas he was merciless, streaking away to an eight-and-a-half-length win when let go from the top of the straight.

At Te Rapa, in the Sprint, he sat third past the 600 metres, hugged the fence rounding into the straight then turned on the afterburners to again bolt clear, again by eight lengths, in a slashing 1.21.92 for the 1400 metres.

In all he won six of his 12 starts and now lives at Newhaven Park in New South Wales. The nine-year-old’s oldest progeny have recently turned three, meaning that He’s Xceptional, the winner of Saturday’s McKenzie Stakes (Listed, 1200m), represents his first crop.

From 21 runners he has sired four winners and seven placegetters and, as he himself didn’t reveal his best until his three-year-old season, there is every reason to believe that his progeny will also benefit from some patience.

His sire Pentire (Be My Guest) was extremely versatile. He could throw brilliant sprinters such as Mufhasa, a Derby winner such as Xcellent, a Melbourne Cup (Gr 1, 3200m) winner and everything else in between. He did Rich Hill Stud proud, but the question still remains: Is Xtravagant the one that got away?