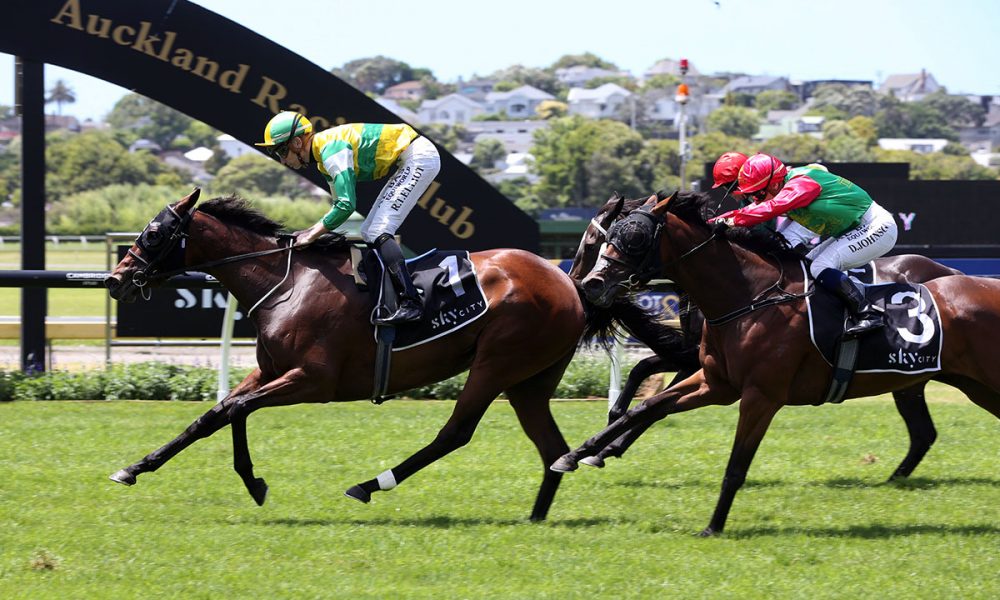 A new year affords a new page; a new beginning, a new hope. Out with the old and in with the new – as the saying goes.

Yet at Ellerslie on New Year’s Day, it was more of the same for the country’s leading stud, continuing their 2021 results and adding to its already imposing record. More of the same is, no doubt, quite acceptable to the Chittick family and their hugely successful Waikato Stud operation.

Of the six Group races staged at racing headquarters, two went the way of Waikato Stud sires. The venerable Savabeel (Zabeel) dominated the City of Auckland Cup (Gr 3, 2400m), providing the quinella as well as three of the first four home. His Concert Hall, a former Group 1 winner, had too much class.

Not many can take a distance race by the throat well before straightening, then steam to the line in total control. Co-trainer Roger James is so right in describing Concert Hall as a remarkably versatile mare, although her previous race when finishing down the field in the Zabeel Classic (Gr 1, 2000m) on Boxing Day was out of character. Perhaps the slow early pace that day was not ideal.

Her super win over 1600 metres the start before indicates that she has a nice turn of foot which she used very effectively in Saturday’s 2400-metre feature by increasing the tempo approaching the 600 metres, a decisive winning tactic.

Next month’s Herbie Dyke Stakes (Gr 1, 2000m) is perfect for her. She knows and loves Te Rapa and her opponents will need to be on song to beat her.

At seven years of age, this season is likely to be her last on the racecourse. With 11 wins, seven of them in black-type events and a Group 1 winner, she will be a fabulous addition to New Zealand’s broodmare ranks.

The Trelawney Stud-owned Cheaperthandivorce (Savabeel), a stablemate of the winner, was a game second. She tracked Concert Hall from the 600 metres and tried hard the length of the straight but will now spell after a successful three-win campaign which included two at Group 3 level. Only a four-year-old, her future as a Cups runner is something to look forward to.

Waikato Stud’s emerging sire Tivaci (High Chaparral) has had three months to remember and his future is increasingly looking brighter and brighter. Having kicked off with the Group 1-winning filly Never Been Kissed in October, he now has another potential star in juvenile filly Wolverine.

Interestingly, Tivaci did not sire a two-year-old winner in his first crop but his second crop has revealed a filly of great talent.

Unbeaten in three starts, the filly was not first past the post in the Eclipse Stakes (Gr 2, 1200m) but certainly deserved to be promoted after being pushed out into the middle of the track when Pacific Dragon (Charm Spirit) persisted in taking her line over the last 100 metres. The nose margin, combined with the head-on camera view, suggested that the stewards had little choice but to reverse the placings. They got this one right.

From purely a local industry standpoint, Tivaci’s results provide a tonic in that the future looks more than promising.

Talking of doubles, Waikato Stud was not alone in taking out two stakes races as Rich Hill Stud, Walton, just a few kilometres north of Matamata, saw their stallions claim a double at Ellerslie, on a New Year’s Day card that saw the John Thompson-owned stud sponsor the feature Group 2 mile race.

Halfway down the straight it appeared that second would be his lot, but with great determination he wore down the pacemaker in the style of a runner who knows what his mission is: get to the line first.

Thanks largely to the huge earnings by I’m Thunderstruck, his sire Shocking (Street Cry) currently sits tenth on the current Australian sire listings and added stakes winner number 16 in the shape of Self Obsession.

At just her third start, Self Obsession took out the Royal Stakes (Gr 2, 2000m) with the last bob of the head but that fails to tell the whole story. The filly was wide early, sat outside the lead to the top of the straight, co-led short of the straight but was headed soon after. However, she was not to be denied and gave everything she had all the way to the post to get that last bob in. She is a fighter.

Her dam was a Melbourne winner at two by O’Reilly (Last Tycoon) while her granddam, My Hangover (My Halo), won five and was twice Group placed. Her third dam is a half-sister to Electrique (Zephyr Zip), a dual Group 1 winner.

In the reflective, we were again reminded just how much of a loss the industry suffered in 2019 when Tavistock (Montjeu) had to be euthanized.

The last crop (actually a half-crop) by Tavistock will be auctioned over the coming months, 17 of which will be offered at Karaka in March.

Sorely missed, as he keeps reminding us of his sire talent, buyers will be tripping over themselves to bag the last of his magic. His own sprinting prowess has been preserved and maintained in his flying mare Entriviere. She was in a class of her own in the Railway Stakes (Gr 1, 1200m).

Perhaps the best field assembled this season, the Railway drew just nine runners but they each had legitimate claims. According to the punters, Levante (Proisir) was the biggest danger to Entriviere, and so it proved, although the margin was clear.

The two mares were level-pegging soon after straightening but Entriviere showed great acceleration to go clear and ultimately won with something in reserve, her seventh victory in only 11 starts which includes four Group races and, of course, this most desired Group 1 success.

Now that she has her elite-level win under her belt it is onward and upward. The Telegraph (Gr 1, 1200m) and the Waikato Sprint (Gr 1, 1400m) may well be hers within the next few weeks.

Soon after that her half-sister by Burgundy (Redoute’s Choice) will be offered at Karaka (Lot 400). It may have been quite a quandary for breeders Kevin and Kathleen Gray. As Gray lamented when Kiwi Chronicles contacted him after Entriviere’s Sheraco Stakes (Gr 2, 1200) win: “I can’t seem to breed any colts, so the filly will go to Karaka.”

Marcey’s Belt, a mare by Golan (Spectrum), won three in the care of ageless trainer Gray. Since the Sheraco, Gray has taken Entriviere’s half-sister, Gucci Belt (Burgundy), to the races twice, scoring a Hastings maiden win at her second start in November.

You could say he has the family secured, so selling at Karaka might not be too tough. The timing, however, could be perfect.

So far noted for her sprinting brilliance, Entriviere has some stouter blood in her veins. Connections may well look at Sydney in the autumn and, if so, it will be very interesting if the mare is given her chance at 1600 metres. She can settle and accelerate and maybe even further could be on the cards? Her pedigree suggests 2000 metres all day long.

Westbury Stud’s El Roca (Fastnet Rock) has been churning out winners week after week all season and Rich Hill Mile (Gr 2, 1600m) winner Mali Ston might be the best of them, according to jockey Sam Weatherley.

“What a little ripper he is and when he got to the front, he pricked his ears and tried to throw it away. I really think he could be a top liner in New Zealand going forward,” said the young rider.

The four-year-old made it four wins in succession and five from seven but had to survive a protest, this one dismissed compared to an upheld protest in race three.

From well back he was ridden patiently and found a split at the right time before prevailing gamely both in a photo and in the stewards’ room.

For El Roca, Mali Ston racks up stakes winner number five with three of those taking place in just the last six weeks. Since December 1, he has also sired a further nine individual winners in Hong Kong, Australia and here at home.

Mali Ston is the only stakes winner in his first two generations. Beyond that, the most recent is his granddam’s half-brother, 1997 Wellington Guineas (Gr 2, 1600m) winner Old Tawny (Star Board). His third dam, Martinet (Marceau) won two Listed races including the Great Easter Stakes Handicap (1600m) at Riccarton.

The stayer settled at the rear, improved rounding into the straight and finished best to claim his fifth and best win, enjoying the 2800 metres he is bred to run.

Sire Zed is noted for his stayers and Tigertiger’s dam, Hoorang (Zerpour), was also adept at the longer distances, having taken out the New Zealand Cup (Gr 2, 3200m) in 2008.

His family has a history of producing good stayers. His third dam is Queensland Oaks (Gr 1, 2400m) winner Triumphal Queen (Triumphal March), herself a daughter of Rustic Ann (Agricola), who in turn is a three-quarter sister to Sydney Cup (Gr 1, 16f) winner General Command (Agricola) and to 1973 Broodmare of the Year Dicidiana (Agricola), dam of Dayana (Oncidium).

Five months into the current season and wrapping up the year, Waikato Stud’s Savabeel (Zabeel) has completely dominated the local scene.

Two of the three Group 1 winners have been forced into retirement, however, with Noverre (Savabeel), the New Zealand 2,000 Guineas (Gr 1, 1600m) victor, bowing out with ligament damage. Somewhat appropriately, the colt will stand next season at Waikato Stud. They sold the colt at the 2020 NZB Karaka Yearling Sale for $800,000 to David Ellis’ Te Akau Racing empire.

Noverre faced the starter just seven times for three wins, adding the War Decree Stakes (Gr 3, 1600m) the start prior to his storming win in November’s 2,000 Guineas, which would be his final raceway appearance.

From the same stable, Savy Yong Blonk collected the Livamol Classic (Gr 1, 2040m), the third leg of the Hawke’s Bay Group 1 Triple Crown. That was also her final race, and she retires with eight wins and almost $500,000 in earnings.

The last Group 1 of the year, the Zabeel Classic (2000m) saw Waikato Stud to the fore yet again, but this time it was the late O’Reilly (Last Tycoon) bringing back memories of his past dominance.

Several reputations were dented when Tiptronic (O’Reilly), in front from the get-go, let loose from the 600 metres, daring the field to run him down. Taking advantage of some soft early sectionals, he had too much in reserve in the straight and was in automatic gear from the 200 metres. It was the second Group 1 for the eight-year-old, as well as his eighth win, and he has banked more than $750,000.

O’Reilly wasn’t finished either. His Vernanme was the main chaser and while he never looked like getting past Tiptronic, he was very determined in providing his sire with the quinella. Some good ones were down the track.

During this same period, Waikato Stud were presented with awards recognising their 2020-21 stakes production and Savabeel’s sire deeds. Even with seven months of the current season remaining, it would take a bold person to predict that Savabeel’s winning sequence of New Zealand sire premierships is anywhere near its end.