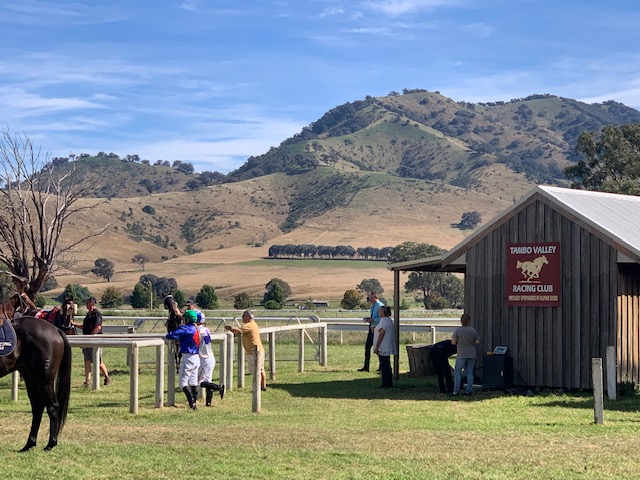 Eschewing the rave at Randwick, the last rites at Oakbank and the cold comfort of Caulfield, where the sun disappears behind the grandstand far too prematurely, I decided on an alternative Easter weekend racing experience.

The Tambo Valley Racing Club staged the 126th running of its Cup at the Swifts Creek racecourse, 379 kilometres east of Melbourne.

Its location is better depicted as 216 kilometres south-east of Wangaratta on the Great Alpine Road or 95 kilometres north of Bairnsdale on the same thoroughfare. It’s not quite the middle of nowhere, but not far from it, with one road in and one road out.

We approached from the former, which takes you through the beautiful townships of Myrtleford and Bright and demands a stop at the delightful Happy Valley Hotel just outside Myrtleford. Then on to Mount Hotham which presents a demanding drive through the final 30 kilometres ascent, but it is worth it. Good heavens, some people were observed to be doing it on foot or aboard odd, self-propelled two-wheel contraptions.

Hotham is cold but idyllic through the summer and autumn. Almost certainly more so than when covered in snow, which is surely the time when rational people would be leaving, not arriving.

Departure was over the mountain to Bairnsdale with the road breathtakingly hugging the Tambo River through narrow tree-lined valleys. It is a truly spectacular drive, albeit one which takes much longer than you might expect given the approximate distance of 95 kilometres.

A stop at the Mount Kosciuszko lookout is worthwhile if only to refresh your primary school learning that Mount Townsend, Australia’s second highest peak and adjacent to Kosciuszko, is just 19 metres lower, which I reckon equates to a short half head. Those peaks are, of course, over the border in New South Wales and local legend has it that you can see an image of Peter V’landys when the sun hits the summit at a certain angle.

We missed the rodeo at Omeo (pencilled in for next year) on the Saturday but refreshed there en-route to the Sunday races at Swifts Creek where a more credible local legend is that six of the eight starting blocks used in Melbourne’s 1956 Olympic Pool now adorn the local pool (with one having been given at Dawn Fraser and another nicked by a few local scallywags including former AFL Footballer Tom Alvin).

To describe the Swifts Creek track as picturesque does not do it justice and, save for the installation, this year, of plastic running rail, you’d venture to suggest not much has changed since racing was first conducted on the site probably in the late 1800’s or early 1900’s. Nobody’s quite sure.

I am sure, however, had the Sunday crowd been dressed in period costume there’d have been few clues to suggest that you weren’t attending a race meeting 100 years ago.

The general store-keeper at Swifts Creek didn’t speak, or not that I heard, but his bemused smile said it all when we asked whether there would be an ATM at the racetrack. His next expression indicated that there was one right behind us in his shop.

We watched as a posse of responsible local lads chose to walk, rather than drive, the couple of kilometres from the township to the course before seizing the opportunity to hitch a ride on a passing ute.

My guess is the crowd numbered something between 700 and 1,000. Not that much smaller than the sans-jumps Oakbank apparently and very good pro-rata, I’d suggest, against attendances at Randwick and Caulfield and likely including a greater percentage of repeat racing customers.

I contemplated this with some amusement as the Racing NSW chief V’landys continues to trumpet that his body has wooed younger generations which, incidentally, the VRC has done – through Cup week – for 30 years. Alas, neither he nor them has captured them long term.

The picnic crowd was apparently down a few as the course broadcaster announced that the local Richardson family, among others, were in Covid isolation and watching from the hill at the back of the track.

The sense of community is obvious and this volunteer-driven event is racing unplugged and offers as good an afternoon as you will spend at the “sports”.

A horse with form at the professionals does not necessarily always beat those who’ve been racing at the picnics and I suspect it would take some time to be au fait with the nuances of the competition and the strengths of the various trainers and jockeys.

Mind you, you probably don’t have to look much farther than the leading jockey, Shaun Cooper, who landed a treble to take his seasonal tally to 49 at a 33.6 per cent strike-rate. Cooper, who hails from Waitara in New Zealand, as does professional jockey Michael Walker, quaintly summed up the picnics when he said: “We celebrate with $7 bottles of champagne, not $100 bottles.”

The picnic season ended with this meeting, following the Balnarring fixture on the Saturday, which meant an extraordinary amount of time (and costs) on the road for all participants. Don Dwyer was the leading trainer with 28 winners, who earned about $100,000, which underlines that the picnics are, sure as hell, not just about the money.

It certainly wasn’t about the money for us.

Our earlier ATM withdrawals were ill-advised as my friend Mentone Matt’s form study proved inaccurate in the early races while his mate the Middle Park Mouthpiece’s forensic examination of the Cup line-up could no better than come up with the third placegetter. A disappointing comeuppance given our teenage accomplice Max, collected en-route from his casual employment at Lindsay Park, had rightly advised the favourite Flying Basil was a “good thing”.

My ten-year-old grandson Van somehow manipulated our assessment of race two to the effect that he was on $20 if either one of the top two (who headed the market in a field of just four runners) won. Two beat one which, naturally, the “adults” were on. Van The Man then collected a further $5 reward for fetching something from the Mouth’s car. He was the only winner on the day. Ah, a chip off the once removed old block.

Out of real chips, we left before the last timing our departure with the on-course arrival of the local constabulary. This, of course, meant they weren’t on the road. Not that any of us were over the limit, but one doesn’t like to tempt fate in such circumstances.