Absolutely a good idea to look at Japanese-Australian mating 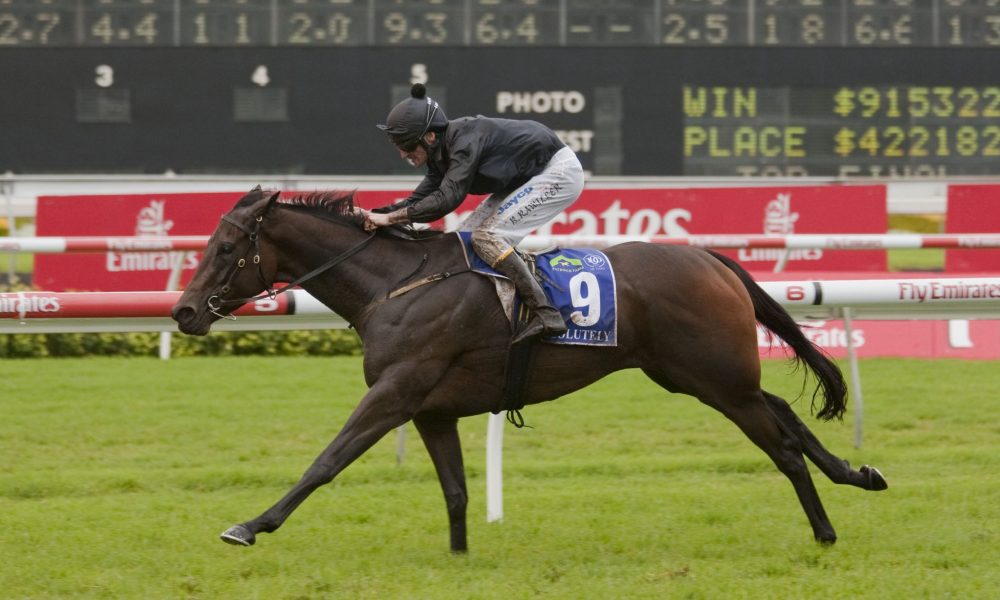 When the Redoute’s Choice Group 1 AJC Oaks–winning mare Absolutely produced her second winner, from as many offspring, at Hakodate in Japan last Saturday, it maintained a strong Australian international breeding link which was seemingly reignited through Royal Ascot.

It also again highlighted the remarkable success of Japanese stallions over Redoute’s Choice mares – although, to date, more so here than there, it must be noted.

Fumi Sound, the son of Just A Way and Absolutely, scored his debut win on the same day as Carpentaria (Lord Kanaloa), a daughter of the VRC Oaks winner Mosheen (Fastnet Rock), won her maiden at Tokyo at her second start.

And that should be well etched in racing memories, as Lezoo was Frankie Dettori’s only ride at the meeting after his somewhat inglorious split from the Gosden training team.

Widden’s Nicconi started the ball rolling at Ascot ,where his son Nature Strip embarrassed the locals to the tune of 4.5 lengths in the King’s Stand Stakes; Coolmore’s Starspangledbanner had State Of Rest successful (and Flotus outstanding in defeat) while Darley’s Brazen Beau had the Norfolk Stakes’ winner The Ridler.

However it was Japan, aside from Westover’s Irish Derby romp, which piqued my interest over the weekend with the success of Fumi Sound and Carpentaria before Titleholder’s course-record breaking win in the Takarazuka Kinen which gives rise again to Japanese hopes of claiming a first Prix de l’Arc de Triomphe win.

That’s an obsession which has burned since 1999 when El Condor Pasa, the first of their genuine modern contenders, failed by just a half length behind Montjeu. That was 23 years ago. It took the Vikings 25 years from their first raid to successfully siege Paris and walk away with an Arc-like booty of 250 kilograms of gold and silver (but the analysis of Japan’s prospects this year we’ll leave to another day).

Fumi Sound, ridden by none other than Yutaka Take, impressed with his strong-finishing debut victory and, along with Carpentaria, may be poised to improve the record of the many high-profile Australian-bred mares who’ve been exported to Japan.

That record is by no means poor and many of their offspring have fetched a “pretty yen”, but it’s not as impressive as what we’ve seen, in the past 12 months, with the outcome of mating well-related, but not elite racetrack performing, mares in Australia with Japanese stallions.

Hitotsu (Maurice), Profondo (Deep Impact) and Count De Rupee (Real Impact) have been produced from Redoute’s Choice mares, while the emerging star Mazu is by Maurice from the Flying Spur mare Chatelaine.

In Japan, Mosheen along with the Redoute’s Choice mares King’s Rose and Banovina have fared best on the list of the many high-profile female exports, which also includes Shamrocker, Southern Speed, More Than Sacred and Silent Sedition, along with the more recently shipped Funstar, Miami Bound, Single Gaze and She Will Reign whose offspring have yet to be tested.

Absolutely beat Shamrocker in the AJC Oaks, after finishing second in the Schweppes Oaks, immediately in front of Southern Speed. King’s Rose was from the same crop and the quest for Australian mares accelerated in earnest.

However it did not begin then, as Japanese racing and breeding expert Naohiro Goda told me, recalling that Okura – who finished second in the Tenno Sho Spring in 1971 – was a son of Australian mare Dalmogan.

Mosheen has had eight named Japanese foals with Primo Scene, a triple Group 3 winner and Group 1 placed in the Victoria Mile, the best to date.

Absolutely’s first foal is the Mikki Isle filly Melville, who won her maiden at the seventh ask, earlier in June this year and possibly remains untapped.

Absolutely’s dam Catshaan (Catrail) is a daughter of Kelthshaan who also produced the successful Japanese stallion Kinshasa No Kiseki. Absolutely’s sister, of course, is the Schweppes Oaks winner Abbey Marie, who interestingly has an unraced Deep Impact two-year-old filly, Jolted, in training with John Sargent.