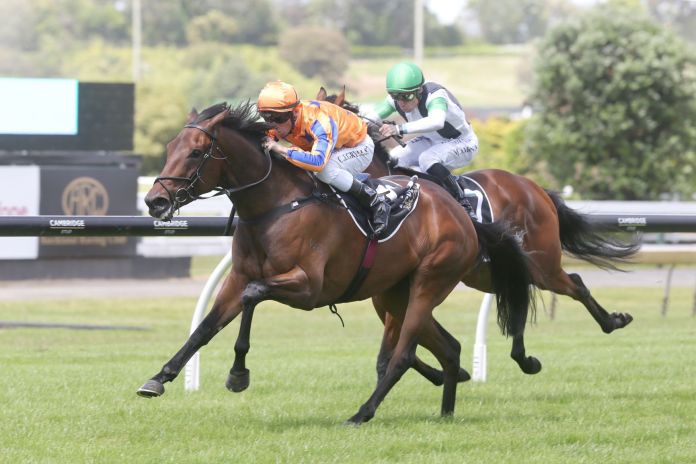 Te Akau Racing-owned filly Amarelinha made a good impression when breaking her maiden second-up at Ellerslie on Saturday.

Ridden by Craig Grylls for trainer Jamie Richards, Amarelinha built on the promise of her debut second over 1200 metres at Awapuni, where she lost out in a head-bobbing finish to Wild Moose (Nadeem) on November 13, upped to 1300 metres in the 14-runner heat.

Having broken slowly from stall 13, Grylls rushed Amarelinha up into midfield position, meaning the duo were trapped three wide early before easing back to to sit one out passing the 800-metre marker.

Creeping closer approaching the straight, Amarelinha made her challenge wide on the turn for home, but she responded generously to pressure and quickened up well with 200 metres left to run. Hitting the front at the point, the three-year-old pulled nicely clear in the closing stages to win by a length and a half, marking herself down as a filly with a bright future.

A NZD$300,000 purchase by Te Akau Racing principal David Ellis from Book 1 of the NZB Karaka Yearling Sale in 2019, Amarelinha was offered through the draft of Waikato Stud. She was bred by the Matamata-based nursery and is a daughter of their champion flagbearer Savabeel (Zabeel).

Amarelinha is the only named foal out of the unraced O’Reilly (Last Tycoon) mare Hopscotch, who is a sister to the dam of Epona Stakes (Gr 3, 1900m) winner Missybeel (Savabeel), a three-quarter sister to the dam of Group 3 winner and Golden Rose Stakes (Gr 1 1400m) runner-up North Pacific (Brazen Beau), and a half-sister to four-time Group 1 winner – including the Randwick Guineas (Gr 1, 1600m) and Rosehill Guineas (Gr 1, 2000m) –  Metal Bender (Danasinga), as well as the Group 2-performed Southern Venture (Zabeel). Since foaling Amarelinha, Hopscotch has produced two more fillies by Savabeel.

Currently standing at Waikato for a fee of NZD$100,000 (plus GST), outstanding producer Savabeel is the sire of 20 Group 1 winners, including Cool Aza Beel, Probabeel and Lucia Valentina, who form part of a broader collective of 105 individual stakes winners worldwide. He has been crowned champion sire in New Zealand for the past six seasons, while he leads Darci Brahma (Danehill) by a shade under NZD$35,000 in the current standings.