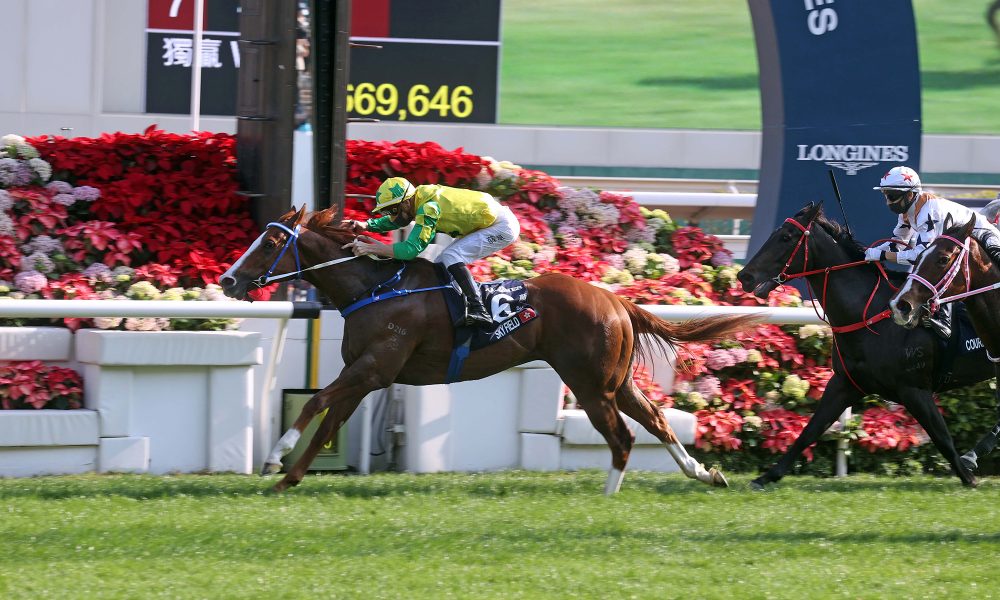 Last Sunday should have been the time when Golden Sixty’s (Medaglia D’Oro) exhilarating display of his athletic ability outshone all else, even Loves Only You’s (Deep Impact) farewell thriller. But when four horses have crashed to the ground at high speed and sent their riders careering to the turf, even exceptional achievements of historic magnitude pale into relative insignificance.

In the years to come, the record books will remind us that the 2021 Hong Kong International Races did indeed give us Golden Sixty’s sublime second Hong Kong Mile (Gr 1, 1600m) victory, which in turn took him past Silent Witness (El Moxie) and Beauty Generation (Road To Rock) to become the horse with the most wins in Hong Kong’s modern history. However, to almost all who watched, the rank outsider Amazing Star’s (Darci Brahma) terrible breakdown in the Hong Kong Sprint (Gr 1, 1200m) will be the unwanted enduring image.

The runners were approaching top speed of around 40 miles per hour and hurtling through the sweep out of the final turn when Amazing Star’s foreleg snapped. The horse’s jockey Lyle Hewitson was fired to the ground, followed by Zac Purton, Karis Teetan and Yuichi Fukunaga, as their mounts Lucky Patch (El Roca), Naboo Attack (Warhead) and Pixie Knight (Maurice) crashed and crumpled to the floor. Amazing Star and Naboo Attack were put down as a result and the visiting Pixie Knight was left with an injured knee.

Hewitson suffered a broken hip and what has been termed a “small” bleed on the brain; Fukunaga broke his collarbone and Purton was left with four broken ribs, a fractured nose and an injured wrist. Karis Teetan somehow escaped injury. It was incredible that the damage was not worse.

“My win is being able to walk home,” Purton told Asia Bloodstock News on Monday as he prepared to leave Union Hospital. Depending on the results of an MRI on his injured wrist, he is hoping to be back race riding in a couple of weeks.

“You don’t see falls as bad as that very often, luckily. It’s just a reminder of how dangerous our profession is. Every time we go out to ride there are risks that always stay,” he added.

Given those risks, the incident and its aftermath raised an uncomfortable question, which was doing the rounds in Hong Kong, as well as among observers further afield: Should Amazing Star have been selected to compete in the Group 1 – one of the most difficult speed tests in the world – in light of his declining form and history of leg issues?

The horse’s ownership group, Grinders’ Racing Club Syndicate, did not have any qualms about paying a sizeable fee – one per cent of the race’s total prize purse – to run in a contest in which their horse had finished ninth a year earlier when he was on an upward trajectory. And the Hong Kong Jockey Club’s selection panel, which decides who can compete and, according to the HKJC Pattern Book, has the right to remove an already selected horse “without assigning a reason,” did not recognise a need to block the gelding’s participation.

“Amazing Star was eligible to be entered, selected and run,” said the HKJC’s executive director of racing Andrew Harding, who replied via email to questions put to him by Asia Bloodstock News. “The horse had an international rating of 110. It may be noted that it won a Group 2 race in April of this year over the same course and distance, beating Stronger by a short head, Wellington and Sky Field. The selection committee makes its decision applying the terms of the (race) prospectus with no extraneous factors taken into account.”

Harding’s response ignored Amazing Star’s performances subsequent to his Group 2 win fully eight months ago. The Jimmy Ting-trained galloper had raced four times since, to finish last of 13, last of 13, 11th of 14 and last of ten. It could be argued that his rating of 110 had become a number of little relevance rather than an accurate indication of his current ability.

Up to the point that Amazing Star broke down, it is near to certain that no one could have predicted what was going to happen to the horse. If a problem had been apparent to the eye, the HKJC’s veterinarians who had checked him pre-race, would have followed protocol and would not have given the all-clear for the horse to compete.

The regulatory veterinarian reviews a slew of relevant veterinary information specific to the individual horse, as well as recent trackwork history and information from trainers and farriers. Harding stressed that the regulatory vets stick to a “stringent decision-making criteria,” on race day with regard to a horse’s suitability to race based on their observations and a horse can be withdrawn at any juncture on a vet’s say-so.

All of the runners in the four HKIR races underwent three official veterinary checks throughout the week in the lead up to the event. Those examinations were further to the day-to-day checks each stable’s vets carried out after trackwork. Amazing Star passed all those assessments. Had any issue been identified, as with any horse, he would have been examined more closely.

“Horses are very well cared for in Hong Kong and they get the care and attention they need,” observed Caspar Fownes, who saddled Sky Field (Deep Field) to win the marred Hong Kong Sprint. “With the vets and the system that we have here, if you’ve got a lame horse the vets are on it every day to check it. If you have a problem with something we can scan it, we can x-ray it, we can MRI it, everything is available to us at a drop of a hat, which is not the case in other places.”

There is no doubt that the HKJC has excellent veterinary facilities and expert vets. It is unreasonable to suggest that the vets operating within the parameters of their established scope, and without the invasive bone scanning requirement that caused so much controversy around this year’s Melbourne Cup, could have foreseen what was to happen. As Harding also pointed out, the regulatory vets “have a single focus, namely safeguarding the safety and welfare of horses and jockeys.”

But none of the above would absolve the HKJC should there be a failure within its system to identify a horse as being potentially unsuitable for one of the biggest races in its calendar on the most important day of its entire year. It is all well and good having stringent protocols but in this case, with Amazing Star showing no lameness into the race, the veterinary side through its assessments alone was not positioned to identify Amazing Star as being out of place in last Sunday’s Group 1.

Could the selection panel not have identified the possible folly of Amazing Star starting in such an important race? His past leg issues and his recent bad performances were public knowledge. Even if the panel did not see the horse’s poor form in isolation as reason enough to not select him for Hong Kong’s flagship sprint race – he likely would not have made the cut back when the local sprint cohort had a greater depth of quality – it could be deemed reasonable that they would have looked at this bigger picture and might have opted to apply wise caution in taking Amazing Star out of the entries. Or was the panel’s “extraneous factor” caveat a constraint?

Had the panel, in unison with the veterinary team, assessed the horse’s abject form in such a way, would then a red flag have been raised? It is difficult to accept that the knowledgeable racing-side professionals in and around the selection panel did not have misgivings about the horse’s suitability to be in the Hong Kong Sprint.

Amazing Star was not going out in a Class 5 at Happy Valley, he was a 201-1 shot in a major Group 1 with a public veterinary record that had eight entries, seven of which could have given the selection panel cause for concern when combined with a knowledge of his poor form. Between February 2018 and March 2019, he had five registered instances of lameness or bone injury including three examples of lameness in his right foreleg. He was twice flagged in 2020 for “unacceptable performance”.

Despite priding itself on transparency, the HKJC’s online veterinary record is not comprehensive, with it being a part-reveal of a horse’s ailments with little to nothing about the treatments given. There is no reference, for example, to the common administration of injected joint medication, which Harding confirmed Amazing Star had received, although the sharing of this fact is not to suggest that the procedure had anything to do with the horse’s leg shattering, merely to emphasise that the online veterinary record is of moderate value: Either share it all or share nothing, might be a better approach.

The terrible falls and the ensuing hampering of runners, including last year’s winner Danon Smash (Lord Kanaloa), unquestionably impacted the race outcome but Fownes is looking forward to the winner, Sky Field, proving the worth of his new status as a Group 1 winner in the Centenary Sprint Cup (Gr 1, 1200m) at Sha Tin in late January.

“I’ve always believed in him and he’s got what it takes,” Fownes said. “He’s still getting there, I promise you, so I’ve got to keep him sound for the next race when he can hopefully show us it wasn’t a fluke.”