An all-local spring? Bring it on 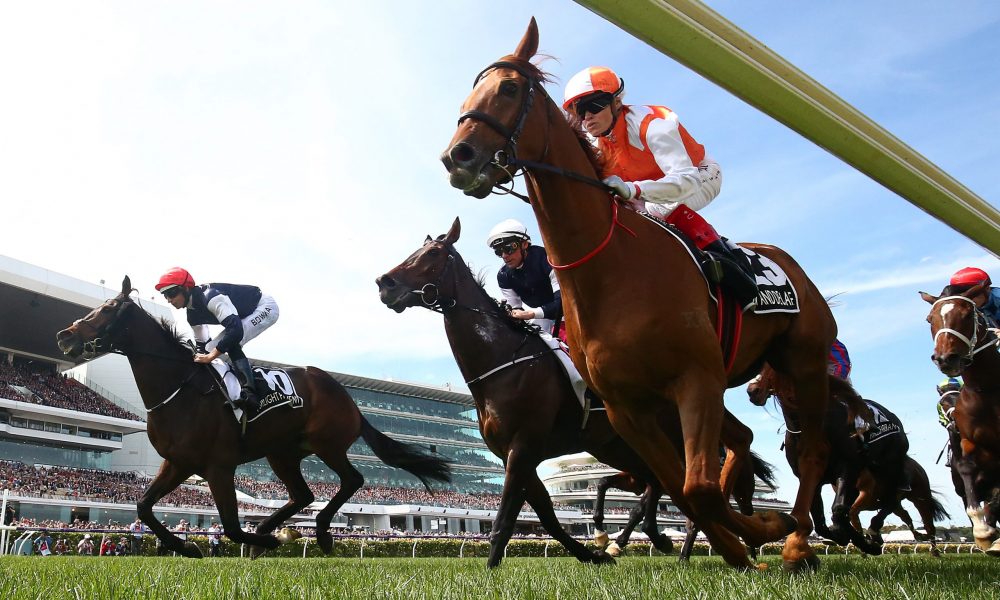 The largesse of the Australian racing industry is extraordinary.

In the past 18 months alone, we’ve happily shelled out more than $21 million of our prize-money to northern hemisphere-owned and trained horses.

That’s to just nine horses. I haven’t bothered with the minutiae of the many others to have picked up place money cheques which would further swell that pot.

True, a good deal of this has gone to Godolphin which is a major employer in this country, but what of the total amount we’ve leaked off shore since Vintage Crop won ‘the’ Cup in 1993.

A further seven overseas-trained horses have won the Melbourne Cup since then, while another 24 have run second or third. Add in six Caulfield Cup and two Cox Plate winners and the figure would be astronomical.

Not all, of course, were owned outright in other parts of the world, but you get the picture.

And the drain would have been even greater had we not had the two freakishly good mares in Makybe Diva and Winx holding the fort. And what of the money spent on courting and housing these visitors?

So, I trust you will understand my frustration when racing club and governing body officials are constantly – of late – lamenting the likely absence of overseas horses from this year’s spring carnival. And this against the backdrop of generally declining Cups’ crowds and turnover.

I’d have thought there were more important issues right now.

I can’t wait for a visitor free spring. One, because the total distribution of prize money to locals only is the likely stimulus many participants will need and two, because it will afford the opportunity for the industry to reassess and possibly reset.

Nobody has been able to itemise any economic benefit from having so many visiting horses – especially from England, Ireland and Europe.

It would be drawing a long and tenuous bow to suggest they drive international tourism. All but one of the nine winners of the big money paid out since the 2018 spring was owned by one individual or one organisation.

Overseas visitors have been attracted to the spring carnival long before its “internationalisation”. Probably since 1895 when American writer Mark Twain famously said of his visit to the Melbourne Cup in 1895: ‘nowhere in the world have I encountered a festival of people that has such a magnificent appeal to the whole nation. The Cup astonishes me’.

I will concede that at least and finally, in the past six months, we’ve had legitimately high class performers appear in Lys Gracieux and Addeybb, although I’m not sure the latter was so acknowledged by the Brits.

The Racing Post recently ran a feature, published in ANZ Bloodstock News, headlined: “How he (Addeybb) went from soft-ground handicapper to Group 1 hero in Australia.”

Those well known battlers Sheikh Ahmed Al Maktoum and William Haggas must be giggling behind our backs and literally laughing all the way to the bank.

Would the recent Group 1 Queen Elizabeth Stakes have lost anything had it been Verry Elleegant, with a multitude of local owners, narrowly beating Japan’s Danon Premium?

The presence of runners from Japan makes sense given the wagering revenue generated from that jurisdiction which only covers international racing in which the country is represented.

The Australian Turf Club is believed to have had around a $2 million windfall from the Hong Kong Jockey Club’s simulcast of The Championships but the HKJC will take these major Australian meetings, when they see fit and are allowed, regardless of international participation.

While Lys Gracieux and Addeybb indeed added some “class”, I would still argue that part of the reset should be to consider whether the number of visitors should be capped and whether the focus should be chiefly on “neighbours” Japan and Hong Kong – linking major races – rather than on Great Britain, Ireland and Europe.

I love British, Irish and European racing. Although perhaps not as much as those who spend millions buying staying horses there – a spend, which incidentally, is not reciprocated on our sprinters.

A handful of Melbourne Cup internationals is probably okay, based on three or four exempt races (but definitely only one for three-year-olds). I have zero interest in internationals contesting our weight-for-age races unless they are among the top three rated horses in their home.

I accept some level of internationalisation may be desirable – provided that means quality horses landing here but it’s just spiralled out of control.

That’s been starkly reinforced by two northern hemisphere three-year-olds beating the handicapper to win the Melbourne Cup; in contrast to the likes of grand performers like Persian Punch, Vinnie Roe and Red Cadeaux (on his second, third and fourth visits) seeking to defy the handicapper.

I’d be delighted to have a Melbourne Cup runner this year with no international opposition and with no greater expectation than finishing sixth to 12th and picking up the $160,000 for doing so. That would have me reinvesting and that prize-money offering shouldn’t change even if the reward for the top three is significantly cut….which it certainly should be in the current circumstances.

I cannot imagine there’ll be any less interest in a Melbourne Cup with no international runners. It’s the Melbourne Cup. It’s sacred.

This year, as international movement sits right now, it is also unlikely the Cup field will include any recently purchased horses – from overseas – by Australians.

Good heavens they might have to think about buying a tried horse locally or, heaven forbid, spending at the 2021 yearling sales!

The long term redistribution of prize-money, through a much wider range of races and therefore (potentially) participants, ought to be a primary focus which might include maiden or first city win bonuses.

A Melbourne Cup worth $7.7 million last year just seems a nonsense now as we recalibrate our thinking on all matters during these extraordinary times.

Likewise the $5 million presented for the Caulfield Cup and the Cox Plate. These hikes, in recent years, are driven by nothing more than ego.

Everything has been nearly turned on its head from crowd-free and zoned jockeys racing to an Inglis Easter sale online – all of which has been exceptionally well managed.

Racing’s state governing bodies deserve plaudits for this but, right now, I’d say they have an unprecedented opportunity to take it a step further by getting together to totally reassess how the sport is conducted at every level – especially as even greater challenges may lay ahead if the economy declines beyond current forecasts and spring carnival racing clashes with delayed AFL and NRL seasons.

That’d be a good idea, I reckon. Who knows what is precisely the right path but there has certainly never been a better time for a wholesale re-think. Better than worrying about how much money we can give away again this year.