An ode, of sorts, to the May races at the ’Bool 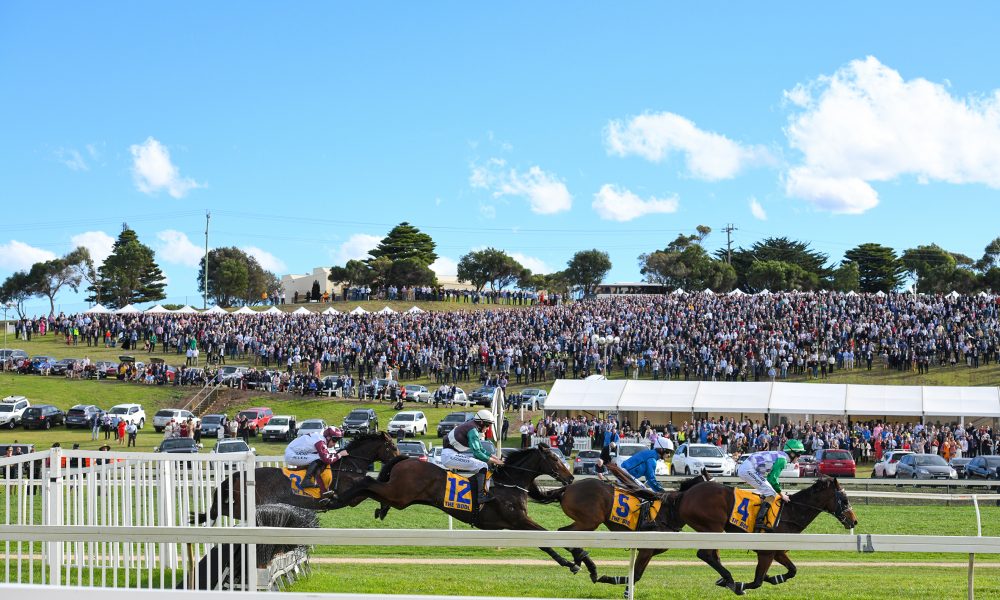 A hint of cultural cringe would have most Australians describe to visitors, especially those from England or Ireland, Warrnambool’s three-day May carnival as a poor man’s Cheltenham or Punchestown.

There are, of course, fewer jumps races and horses not of the same calibre.

However, I’m yet to meet a visitor – in 50 odd years of trekking to the Bool – who didn’t embrace the May races for what they are – a great celebration of grass roots and jumps racing and a near sacred pilgrimage for many.

Ironically, perhaps, it’s been the Irish who have made the meeting their own in recent years with Irish–born jockeys Shane Jackson, Richard Cully and John Allen winning five of the past eight Grand Annual Steeplechases. Countrymen Tom Ryan and Marin Kelly have joined in with success in the Brierly Steeplechase; Ronan Short won the Galleywood Hurdle.

The significance of the meeting is not lost on them. Jackson, after winning last year’s Annual on Ablaze, said: “I won the Grand National Hurdle, that was a big thrill. I won some nice races back home, but this is the pinnacle. This is the best.”

Perhaps their success was inevitable given the Irish influence in the district, notwithstanding that it was a Scotsman William Keith who purchased the first allotment offered in Warrnambool in 1847 and acted as secretary and treasurer for the first race meeting according to Mark McNamara’s book The Bool.

Just 20 kilometres away, it was the rich volcanic soil around Koroit which lured Irish immigrant farmers in the 1840s and 50s. Chiefly, small grain and potato farmers ‘took their produce down the slope to Warrnambool’.

Koroit, home of Mickey Bourke’s famous pub which has hosted countless race week celebrations, took on the flavour and culture of the settlers’ Irish homeland. Koroit still honours its strong Irish catholic heritage and there’s nothing those of us, of that descent, like better than a beer and a bet.

Closer to town (the Warrnambool city centre) was the eminently Irish Shamrock Hotel at Dennington which was also a popular May races destination and the venue of my father’s last supper.

The Grand Annual is not the world’s longest steeplechase but with 33 has the greatest number of obstacles or fences; not steeples, they’re the things on churches. The term steeplechase derives from racing from one church to another.

The Annual was first run in 1872. It’s not as old as Aintree’s Grand National (1839) but well and truly preceded the Cheltenham Gold Cup (1924) and pips, by two years, the Czech Republic’s famous Velká Pardubická.

The Warrnambool race of 5500 metres through open paddocks as well on the racecourse proper provides a stiff test. Always has, apparently.

Brothers Bill and Mick Moran (no relation as far as I know but something I might have to research) were among the most successful trainers in the early history of the race through the 1880s and 90s. They were of Irish heritage. Mick, according to McNamara, said Aintree “might be about as stiff as the Warrnambool course but not as formidable as Coleraine”.

Mick Moran had apparently taken a horse called Dutchman to England for the National but the Jockey Club framed a rule which precluded him from starting. Moran then organised a match race, over the National course, for a sizable sum and took the money when Dutchman’s well–fancied opponent fell at the last fence.

One hundred years on and my introduction to the Warrnambool May races was in 1973, travelling with my father Bill Moran and his mates who included Jack Reed, son of Ashley Reed who won the Caulfield and Melbourne Cups double on The Trump in 1937.

After many of his friends had died, it became dad venturing to the Bool with me and my mates. He did so, for the last time, in 2000 before dying in his sleep on the night before the Annual and Cup meeting.

He’d declined to come in 1999. He’d held court at the aforementioned Shamrock Hotel the night before after declining to go out after the first day at the races. It was as if he chose his time and place.

Dad had had a small interest in a couple of horses with legendary local trainer Jocka Baillie which was our entrée to the memorable post-race drinks at Baillie’s on–course stables. Baillie, who died in 2014, was one of only three trainers to have prepared Grand Annual Steeplechase and Warrnambool Cup winners.

He, of course, trained Galleywood who features in one of the two great resurrection stories of the modern Grand Annual. Galleywood won the Brierly Steeplechase in 1983 and 1986 but his win in the 1986 Grand Annual was the stuff of folklore.

He’d fallen at the last fence in the 1984 Grand Annual and lay motionless on the track. The crowd feared the worst as screens were erected around the horse but, a couple of minutes later, there was huge applause as he managed to get to his feet. He’d been winded. Applause which was only exceeded when he returned to win in 1986.

Banna Strand, similarly, won the race two years after he’d crashed into the crowd in 2011. That mishap was brilliantly captured by then part–time photographer Sharon Chapman, who’s now built a career in racing photography. Banna Strand was one of five winners for New Zealand trainer John Wheeler – that record tally matched last year by Ciaron Maher.

The remarkable Jim Houlahan won it four times (his daughter Fran was also successful in 2003). Houlahan, who among many other distinctions built the Calder Speedway and was a punting confidante of Gregory Peck, was quietly spoken. Despite that, I recall him managing to demand the complete and silent attention of an otherwise raucous and rowdy crowd at a sportsman’s night during the May carnival.

Vic Douglas, who stabled with Baillie, notably won the race in successive years with Hoki, whose wins either side of those successes had been at the picnics. He won at 25–1 and 15–1 despite a level of confidence, which might have been passed on to those in the stable circle, from the trainer.

Baillie never trained a huge number of winners in any given season but invariably managed to produce at least one each year at his home town carnival – much to the delight of my mates, his brother Les’s friends and a raft of De La Salle old collegians who raced horses with him.

With St Arnaud Turf Club stalwarts Bill and Marilyn Knights, I raced a horse named Cachinnate with Baillie. He made an undistinguished debut at Stawell in February 2004 and resumed, at the carnival, three months later.

“Done the form?,” Baillie asked. “Of course, they’re a moderate lot but Tony Noonan’s got one who might be smart. Only run in town was okay and it’s trialled well,” I said.

“It’d want to be Schillaci to beat us,” Baillie replied. This was such an out of character utterance of confidence from a man of measured understatement, I’d have had $10,000 on it if I’d had $10,000. As it was, I managed to have about 10 per cent of that sum on at 15–1. You know the end of the story. Cachinnate ran second after a somewhat ill-judged and overconfident ride from the jockey.

“We’ll go straight to town with him now. He’ll be odds on wherever we take him in the bush now,” Baillie said, after recovering his composure, in yet another departure from his norm. Off to Moonee Valley; in front and home for all money at 30–1 before cardiac arrhythmia kicked in with 100 metres to run. Never mind. Cachinnate did go on to win on Oaks day, alas at Warrnambool, not Flemington.

Among the other notable Annual winners in my memory is trainer Quinton Scott, who prepared Rocky Affair to win the Brierly and the Annual in 1984, the year Galleywood fell. He also won the Wangoom Handicap that year with a “crock” Prince of Brandy who produced a barnstorming finish.

Robbie Laing, of course, won in 2009 with Sir Pentire, who hadn’t raced for two years. He beat Al Garhood, who would win the race the next two years. It was some training effort.

This year’s carnival, of course, begins next Tuesday. It’s a sell out for the Annual and Cup on Thursday but when I last looked online you could still get a general admission for Tuesday and Wednesday and even find an Airbnb – perhaps not in town but not too far away in the surrounding Irish enclaves.