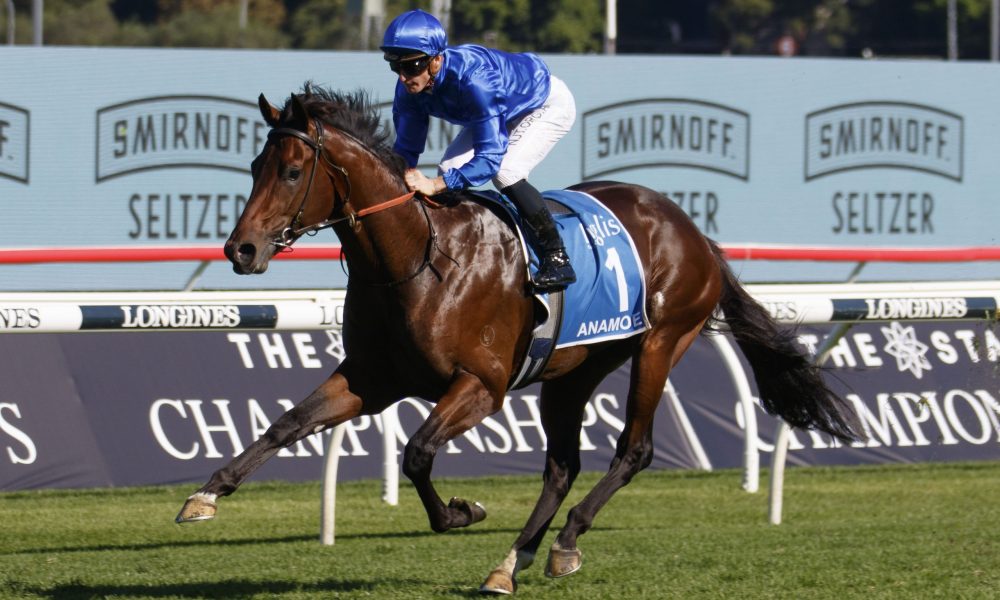 It demands no great level of insight to suggest that the James Cummings-trained Anamoe (Street Boss) may be the star of the 2021 spring carnival.

However the “moneyball” angle says there should be no limit to those expectations and back the Godolphin-owned colt, now, to win the Cox Plate (Gr 1, 2040m), for which he’s much juicier odds than in his obvious target of the Caulfield Guineas (Gr 1, 1600m), in which he is unsurprisingly favourite.

Godolphin chief Vin Cox has already strongly intimated that a Guineas path is much more likely than pursuing The Everest  (1200m), for which the team holds a slot.

This, of course, is logical given Anamoe scored the most dominant two-year-old win of last season when stretched to 1400 metres in the Sires’ Produce Stakes (Gr 1, 1400m). Immediately behind him were Hilal (Fastnet Rock) and Captivant (Capitalist), who would then quinella the Champagne Stakes (Gr 1, 1600m) (in the reverse order) with the JJ Atkins Plate (Gr 1, 1600m) winner Converge, in turn, immediately behind them.

Timeform Australia has the Golden Slipper (Gr 1, 1200m) winner Stay Inside (Extreme Choice) rated above Anamoe in the top two slots which I’d argue is the wrong way around and, in any case, the unquestionably talented Stay Inside may well be confined to sprinting targets in the next four months.

Anamoe won both starts on good ground during the Sydney autumn and had Stay Inside, albeit a little unluckily, one and three-quarter lengths astern in the Todman Stakes (Gr 2, 1200m). The latter claimed the Slipper at Anamoe’s expense but that was on heavy ground, with Stay Inside having the better of the rub on that occasion.

Anamoe’s dam Anamato (Redoute’s Choice) stretched to an Oaks placing which augurs well for him coping with the Cox Plate middle distance, and he does have a wonderful female line which was outlined in Trevor Marshallsea’s ANZ Bloodstock News pedigree column back in April.

From our speculative point of view, the key is that two-year-old Sires’ form features in the form of six of the seven three-year-olds who have finished in the first three in the Cox Plate since So You Think (High Chaparral) won his first, as a three-year-old, in 2009. So You Think is, in fact, the odd one out having not debuted until after the Sires was run in his juvenile year.

If one three-year-old could advance to the Cox Plate podium in 2021 it is surely Anamoe – especially with a limited international challenge which has predicated these spring prognostications. No Godolphin European runners has been confirmed and Ballydoyle will be absent.

Just 15 international nominations were taken yesterday for the Melbourne Cup, down from 30 last year, with only four entered for the Cox Plate.

Sires’ credentials at two also feature prominently in the profiles of Golden Rose (Gr 1, 1400m) and Caulfield Guineas winners which is, of course, no surprise.

Perhaps more interesting is that every Golden Rose winner since Manawanui (Oratorio) (in 2011) had won or been placed in major two-year-old races during the Sydney or Brisbane carnivals giving lie to the notion of juvenile burnout and that crops differ greatly in ability and potential from year to year.

The Caulfield Guineas winner profile at two is not dissimilar, albeit with more exceptions including two winners emerging from Flemington’s Anzac Day Stakes (Listed, 1400m) in April – won this year by the Tony and Calvin McEvoy-trained Three Kings (Sebring).

The Victoria Derby (Gr 1, 2500m) winner’s profile is harder to call at the end of their two-year-old year although a Fernhill Handicap (Listed, 1600m) and Champagne Stakes thread is found in three Sydney-trained winners in the past decade. Thus, the precedent horse this year is obviously early favourite Converge (Frankel), who did so much more than run very well in those aforementioned races.

Converge is the first foal out of eight-start Irish maiden Conversely (Shamardal). However, her dam Melhor Ainda (Pulpit) was placed in the American Oaks (Gr 1, 10f) at Hollywood Park in 2005 (coincidentally, and remarkably, Anamato was also placed in that race in 2007 in a USA cameo). Melhor Alinda has produced a 2400-metre winner in Bushel (Street Cry).

Saif (Pride Of Dubai), who overcame Converge in the Baillieu Stakes (Gr 3, 1400m) in April, had been lightly raced and looms as a prominent spring contender for the Golden Rose and the Caulfield Guineas.

The Derby is a race which very much appeals to Malcolm McLaren, from Form Focus, but nearer to the event.

“From 1991 to 2020 (30 years), 29 Derby winners contested at least one of the four principal lead-up races – Spring Champion, Norman Robinson, Geelong Derby Trial or the Moonee Valley Cup and each of them finished in the first six. You can delete anything that did not.

“Further fine tuning of other stats-based data (including excluding the favourite if $4 or longer) and you could’ve backed many of the longer-priced winners including Rebel Raider at 100-1,” McLaren said.

When it comes to the best performed locally-trained Caulfield Cup performers of the past ten years, it’s no shock that Classic form from the previous season is prominent and Waller is seemingly well placed with ATC Oaks (Gr 1, 2400m) winner Hungry Heart (Frankel) plus the Queensland Derby (Gr 1, 2400m) quinella Kukeracha (Night Of Thunder) and Señor Toba (Toronado).

But if you fancy a quirky “moneyball” futures flutter for the Caulfield Cup, then it has to be the Patrick Payne-trained Defibrillate (Shocking), who won the Victoria Cup (Listed, 2000m) (Mornington Cup Prelude) at Caulfield in the autumn before finishing sixth in the Australian Cup (Gr 1, 2000m). That’s precisely the same autumn form as 2017 Caulfield Cup winner Boom Time (Flying Spur) and that of Homesman (War Front), who was beaten a nose the following year.

The Victoria Cup has been something of an unheralded form race in recent years with Assign (Montjeu), in 2016, then – in the following spring – winning the Herbert Power (Gr 2, 2400m) while 2014 winner Prince Of Penzance (Pentire) would then win the Moonee Valley Cup (Gr 2, 2500m).

Part one of this spring look, incidentally, focused on the Melbourne Cup with the “moneyball” approach landing on Incentivise (Shamus Award) and Selino (Champs Elysees) as those worth speculating early; along with all those who ran well in this year’s Sydney Cup (Gr 1, 3200m).