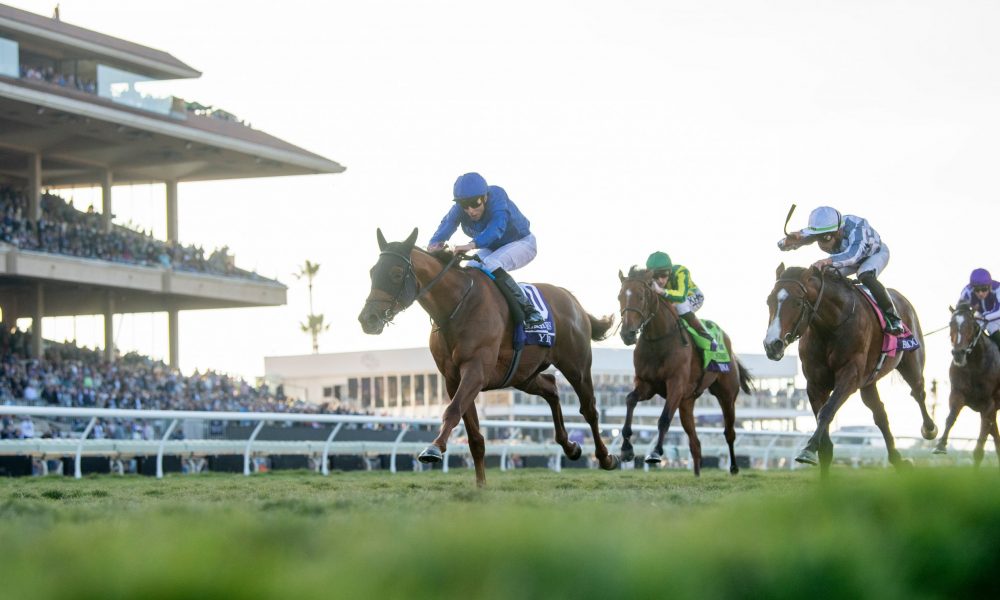 The horse who, in the wake of the Breeders’ Cup meeting, would likely head the market for next year’s Prix de l’Arc de Triomphe won’t be running.

The horse, of course, is Breeders’ Cup Turf winner Yibir and a horse is a horse of course, of course (with apologies to Mr Ed) unless it’s a gelding and geldings may not run in the greatest race in France (if not the world).

I shall not dwell again on the “falling on deaf ears” argument against that archaic ruling and I doubt that his trainer Charlie Appleby is unduly perturbed given the riches of his team which has garnered 17 Group 1 races this year.

Yibir (Dubawi) will not end the year, in any rankings, as the best “mile and a half” horse in the world. In fact, he won’t even be top ranked in his own stable with Appleby having Epsom Derby winner Adayar and Irish Derby winner Hurricane Lane (both by Frankel).

However, in my view, Yibir is the emerging star and just might become the best older 2400-metre horse in the world; perhaps only rivalled by our own Caulfield Cup winner Incentivise – another gelding ineligible for the Arc, much to trainer Peter Moody’s chagrin – given any rating of this year’s Arc winner Torquator Tasso has to be accompanied by an asterisk given the very heavy ground.

Yibir is unbeaten in four starts on good and good to firm ground, at 2400 and 2500 metres, since being gelded. He returned a sprinter’s last 400-metre split of 22.85 seconds in his come-from-behind win at Del Mar which followed a Belmont trouncing of Soldier Rising who’d run Cox Plate winner State Of Rest to a length at Saratoga at his previous start.

The trainer, who is rapidly building an unrivalled record, also won the Mile with Space Blues and the Juvenile Turf with Modern Games.

This is the man whose credits include ‘first Englishman to win the Melbourne Cup’, ‘first trainer to win an Epsom Derby for Godolphin’ and ‘one of few to claim a Group 1 double on Dubai World Cup night’.

His placement of horses in Group 1 races is impeccable, as evidenced again this year by his success with Althiqa in the US and with Albahr, Wild Beauty and Walton Street (from Australian mare Brom Felinity) in Canada.

International success is very much a focus for the Appleby team but, while doing so, he has maintained a phenomenal 28 per cent five-year winning strike rate at home (by comparison the Gosden team is batting at 21 per cent while Aidan O’Brien’s strike rate is 20 per cent in Ireland over the same period).

There is little sign of any possible slide next year with his raft of rising three-year-olds including the unbeaten Dewhurst Stakes winner Native Trail (Oasis Dream); Autumn Stakes winner Coroebus (Dubai) and, of course, Modern Games.

Not to mention Albahr (Dubawi) who was scratched in that controversial entrée to the Breeders’ Cup Juvenile Turf. He’d won the Grade 1 Summer Stakes at Woodbine, beating Grafton Street, who was arguably the best run behind Modern Games.

His filly Wild Beauty (Frankel) also had her form franked when Pizza Bianca (Fastnet Rock) won the Juvenile Fillies Turf although, in fairness, the Gosden’s Inspiral (Frankel) looks to have a mortgage on next year’s 1,000 Guineas, assuming no misadventure.

While Appleby stole the Breeders’ Cup show, mention must certainly be made of Japan’s Yoshito Yahagi who might be described as Japan’s Appleby in terms of recent international success.

Next stop for Loves Only You is the Hong Kong International meeting next month which will be devoid of Australian runners. Chris Waller’s high profile entries including Verry Elleegant, Nature Strip and Hungry Heart are all believed to have gone to the paddock.

Australia is expected to be represented by James McDonald and Damian Lane in the International Jockeys Challenge with confirmation of the invited jockeys expected today (Wednesday).