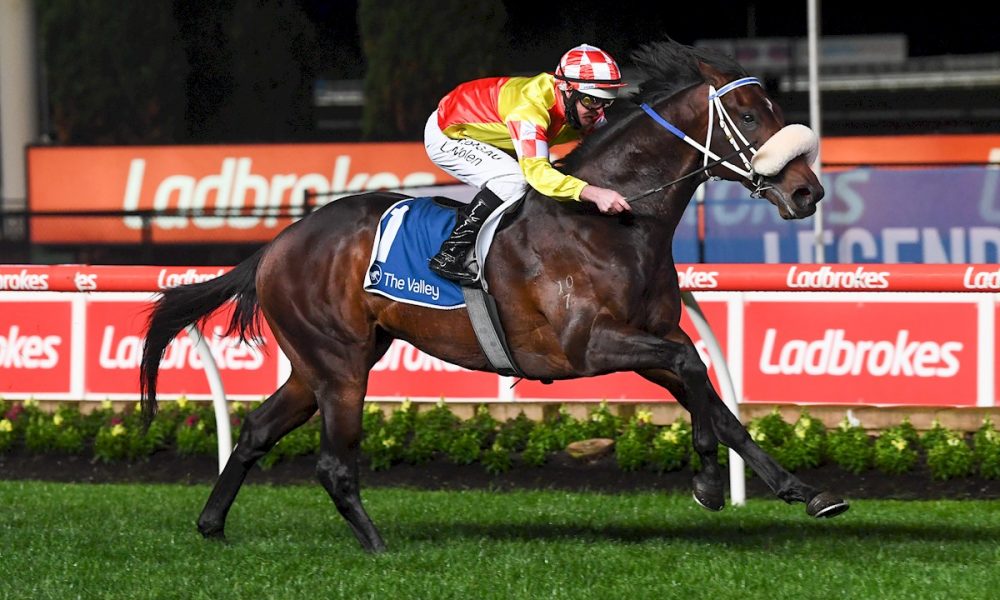 Aquis Farm has announced their second new stallion to join their Canungra-based roster in the space of a week, with the high-class but untapped Group 2 winner and ATC Champagne Stakes (Gr 1, 1600m) runner-up Glenfiddich (Fastnet Rock) set to stand the coming breeding season for an introductory fee of $8,800 (all fees inc. GST).

Glenfiddich will take his place alongside fellow freshman sire Jonker (Spirit Of Boom) in Queensland, who it was announced last Monday would stand for a fee of $16,500 for his first season at stud.

Trained by Robbie Griffiths as a juvenile, Glenfiddich raced nine times for a victory in the Mornington Sires (1500m) in March, 2020 but opened his career with a fifth placing in the Maribyrnong Plate (Gr 3, 1000m) in November of his two-year-old year, before finishing second to subsequent Blue Diamond Stakes (Gr 1, 1200m) runner-up and Rosemont Stud stallion Hanseatic (Street Boss) in the Blue Diamond Preview (c&g) (Listed, 1000m).

Transferred to Peter Moody for a three-year-old campaign, Glenfiddich returned with a third in the Memsie Stakes (Gr 1, 1400m) behind Behemoth (All Too Hard) before winning the Stutt Stakes (Gr 2, 1600m) at Moonee Valley by a commanding two lengths. However, his 12th placed finish in the Coolmore Stud Stakes (Gr 1, 1200m) a month later in October 2020 was the last time the racing public would see the son of Fastnet Rock (Danehill) on the track, with Glenfiddich having picked up a tendon injury that ultimately he would never recover from.

His premature departure from his racing career leaves Jonathan Davies, director of sales at Aquis, believing the best was yet to come from Glenfiddich, while revealing they had chased the stallion hard since a stud deal was mooted for the colt following his last start in the Coolmore Stud Stakes.

“There’s no doubt we never saw the best of this horse. Peter Moody has been quoted multiple times as saying that Glenfiddich is among one of the best horses he’s ever trained, which is a pretty big rap from someone like Peter Moody,” Davies said.

“Their initial plan was to go to the Caulfield Guineas and onto the Cox Plate. Peter thought he had the Caulfield Guineas at his mercy, but they had to change tack and freshen him up on the month and go to the Coolmore and unfortunately that’s where he first injured his tendon. There’s little doubt that had he not had those injuries he would have been a multiple Group 1 winner.”

The ownership group led by Edinburgh Park Stud’s Ian Smith, who bred and sold the colt as a yearling, elected to try and rehabilitate the horse instead of sending him to stud last year. However, with those efforts forlorn, Davies said Aquis moved quickly to secure him for the coming breeding season.

“He was a horse that popped up on our radar ever since he ran second in the Champagne Stakes as a two-year-old and we’d been following his career since,” he said.

“After he ran third in the Group 1 Memsie as a spring three-year-old, that signalled to us he was a good stallion prospect and a proper horse, so we started a line of communication with Ian Smith of Edinburgh Park and then he won the Group 2 Stutt Stakes, which has been a great race for stallions in the past with the likes of Encosta De Lago, Zabeel and Pierro having won it.

“We went down and viewed the horse last year and spoke about doing the deal while he was doing some rehabilitation for his tendon injury, but they were keen to race him on at that stage.

“But as soon as I heard they were looking to retire him to stud this season I was straight on the phone to Ian and jumped on the plane down to see him.”

The true extent of Glenfiddich’s talent on the racecourse will never be realised, however his front-running display in the Champagne Stakes, won previously by Aquis’ current leading first season sire by winners The Mission (Choisir), saw him finish sandwiched between two of the most coveted sires to head to stud last year, with Sires’ Produce Stakes (Gr 1, 1400m) winner King’s Legacy now commanding a fee of $33,000 at Coolmore, while Vinery’s Ole Kirk was given a fee of $55,000.

“They are both excellent racehorses and stallions but Glenfiddich, there was only a neck in it behind King’s Legacy and Ole Kirk was a length and a half behind in third,” Davies recalled.

“At $8,800, with his performance and pedigree and type of horse he is, I’d probably say he’s one of the better looking sons of Fastnet Rock, certainly that I’ve come across, I think he’s incredible value. If he leaves good looking progeny that walk like him then they’ll sell and make their force known in the racetrack.”

Glenfiddich was a $200,000 yearling buy for Griffiths Racing and Peter Ford Thoroughbreds from the 2019 Magic Millions Gold Coast Yearling Sale, with vendor Smith electing to keep a stake in the colt.

Out of the twice-winning, US-bred mare Nothin But A Dream (First Defence), Glenfiddich is out of a daughter of stakes race winner Darling Alice (Northern Flagship) and half-sister Smokin’ Alice (Smoke Glacken), dam of Magic Millions 3YO Guineas (RL, 1400m) winner and dual Magic Millions Cup (RL, 1400m) scorer Eleven Eleven (Fastnet Rock), while Fastnet Rock also has a considerable influence on the family through Group 1 winner Comin’ Through and the formerly Aquis-owned Siege Of Quebec, Bull Point and Upon This Rock.

“We always had a lot of confidence in Glenfiddich and it’s not hard to work out why; he’s such a lovely type of horse, with a great temperament and that family has worked so well for us,” Smith said, who has suggested he will be active at the upcoming Magic Millions Broodmare Sale in support of Glenfiddich.

“There’s something like ten stakes horses alone in the second dam, while others on the page represent some of the best racehorses we’ve seen on Australian tracks over the last decade or so.

“Edinburgh Park was very happy to retain a share in Glenfiddich after the yearling sale and we’re ecstatic that he’s heading to Aquis Farm where he will get every opportunity to succeed. The owners and I will be supporting him with some nice mares.”

The addition of Jonker and Glenfiddich to the Aquis Farm roster are the first since 2020 when the stud secured roster leader Pierata (Pierro) and Dubious (Not A Single Doubt) for stud duties, and follows a restructuring in March, 2021 in which the operation moved all stallions to Queensland and relinquished properties in the Hunter Valley and Victoria.

“We’re incredibly happy and very proud of our stallion roster at the moment,” Davies said. “Obviously it’s headlined by Pierata and we’ve been touring around the country looking at his weanlings at the moment and we could not be happier with the quality of stock that he’s left on the ground.

“It’s very much an exciting time with more of his progeny going to the weanling sales soon and the first weanling by Dubious sold for $200,000, which was fantastic.”