Are star attractions Nature Strip and Catalyst beatable on an action-packed afternoon? 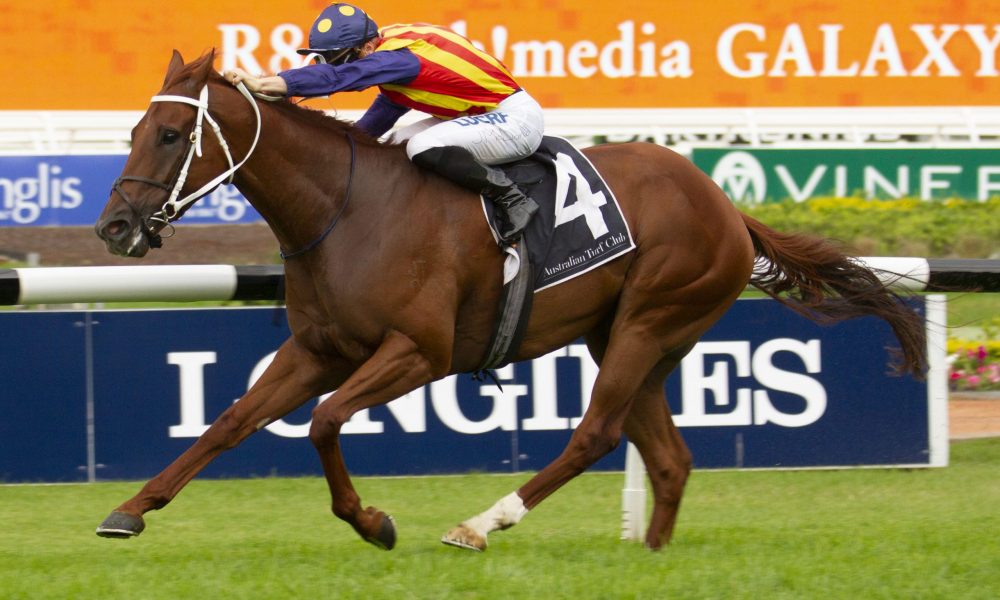 Nature Strip’s (Nicconi) reputation, mooted Royal Ascot venture and bid to become Australia’s highest-rated sprinter will be tested for the first time in 2020 when he resumes in today’s $750,000 Black Caviar Lightning Stakes (Gr 1, 1000m) at Flemington.

The return of Chris Waller’s star speedster and the first Australian appearance of Catalyst (Darci Brahma) in the CS Hayes Stakes (Gr 3, 1400m) earlier on the card headline this afternoon’s action, which features nine stakes races from Flemington and Randwick.

Sydney’s reigning champion jockey James McDonald rides both horses in Melbourne and he spoke enthusiastically of their prospects yesterday.

However, Nature Strip’s capabilities continue to divide opinion, even if bookmakers have victory a near fait accompli at yesterday’s quote of $1.45.

Catalyst is also likely to divide opinion given the Australian autumn defeats of his high-profile Kiwi predecessors Extravagant (Pentire) and Madison County (Pins), not to mention that of his sire, Darci Brahma (Danehill), who succumbed to Apache Cat (Lion Cavern) in the 2006 running of the Australian Guineas (Gr 1, 1600m).

“He’s in really good order, probably a little bit forwarder than what he was leading into his first-up run last prep,” McDonald said of Nature Strip on Friday’s Sky Sports Radio Racing HQ.

That may be significant given Nature Strip’s previous first-up run was a disappointing fourth behind the evergreen Redzel (Snitzel), beaten two and three-quarter lengths having over-raced. The dual Everest (1200m) winner re-opposes first-up today, like he did when securing that Concorde Stakes (Gr 3, 1000m) success at Randwick.

Neither the Snowden team with Redzel, or the Ciaron Maher and David Eustace stable, who will be represented by Loving Gaby (I Am Invincible), second to Nature Strip in last year’s VRC Sprint Classic (Gr 1, 1200m), have conceded the Lightning Stakes to Nature Strip.

Nature Strip’s Sprint Classic success was dominant at 1200 metres, although the win was little more than a track gallop with an unpressured amble through the first 600 metres in 0.36.2. This race may set up differently with Redzel, who was ridden aggressively in his Concorde win and in his latest barrier trial, potentially applying early pressure.

“It will be handlebars down and just full-on speed,” Redzel’s co-trainer Peter Snowden said earlier in the week.

He then added: “Nature Strip is a good horse and he’s going very well”.

Those comments were echoed by Loving Gaby’s co-trainer David Eustace, who said: “We’re not conceding the race to him, but obviously it will be difficult to beat him (Nature Strip).

No three-year-old filly has won the race since Regimental Gal (General Nediym) in 2004 but Sunlight (Zoustar) was beaten less than half a length when third to In Her Time (Time Thief) last year.

McDonald, who rode Nature Strip in his Tuesday morning straight track work at Flemington, expects the five-year-old to race better than when beaten in the Concorde.

“He’s in a good frame of mind…his action feels enormous and he couldn’t be going any better,” he said.

“Obviously if we get the first-half of the race right then the last-half will look after itself. There’s no question he’ll get it right Saturday.”

McDonald will ride Catalyst for the first time for his fellow countryman Clayton Chipperfield.

The gelding, who is unbeaten in six starts since his debut, was bred at New Zealand’s The Oaks Stud, owned by Australian Dick Karreman, who decided to race the colt after he was withdrawn from Karaka as a yearling.

“He looks pretty good,” McDonald said of Catalyst. “I’ve followed him all the way through.   Connections told me some time ago to keep an eye on him for when he comes over here and I’m lucky enough to jump on him now. He’s pretty exciting.

“It looks a tactical race and drawing the outside gate makes it a little bit difficult, especially with Alligator Blood up front. We are going to spot him a start, but he looks exceptional and hopefully can live up to the hype.”

Chipperfield said he was so pleased with how his horse had travelled that “we could only have one excuse and that’s the draw.”

Chipperfield confirmed that Catalyst would be “ridden back”, but hopefully “not too many lengths behind Alligator Blood”, whose trainer David Vandyke has advised stewards that his eight-time winner would “attempt to lead” from barrier one.

“I’m under no illusions as I watched Catalyst win his last start and he just blew them away and was so impressive,” Vandyke said.

“He is a class horse and in just about any other era a horse like that could come to Australia and quite easily be dominant.

“But there’s a lot of good three-year-olds around at the moment and this carnival is very exciting because we are going to find out which one is the best.”

“She (Alizee) motored home stylishly in the Expressway behind a very promising three-year-old and since then she’s had a very sensible and straightforward build-up,” Cummings said.

The Futurity Stakes (Gr 1, 1400m) at Caulfield next Saturday remains an alternative for Alizee if today’s Randwick track has worsened from the heavy 8 rating given yesterday.

“Both her trials have been encouraging, she won the latest one in good style and she gets the going she prefers,” Cummings said of Kiamichi.

As to Flit, he added: “She’ll certainly be better for this first-up run and, needless to say, she’s going to be even better when she gets up to the mile.”

Godolphin’s third Light Fingers runner is the Anthony Freedman-trained, Blue Diamond Stakes (Gr 1, 1200m) winner Lyre (Lonhro), who “seems to be back to her old self” according to assistant trainer Sam Freedman.

However, Libertini (I Am Invincible) clearly heads the Light Fingers betting ahead of the Godolphin trio, and trainer Anthony Cummings expects her to return to her best form, which resulted in four wins from her first five starts.

“I think we have the best filly, particularly over this course,” he said.

The in-form Thompson is hopeful Dreamforce can repeat his first-up course and distance win of last spring, although he is wary of the conditions.

“I am very happy with him. His two trials, he has never looked better. He won first-up over 1400 metres (last time in) and is forward enough to do it again, but I’m aware that his best form is on good tracks,” Thompson said.

“Obviously Alizee will be hard to beat. I think you have to give respect to the old horse Happy Clapper, but I would say he is probably more of a miler second-up in a race like the Chipping Norton.”