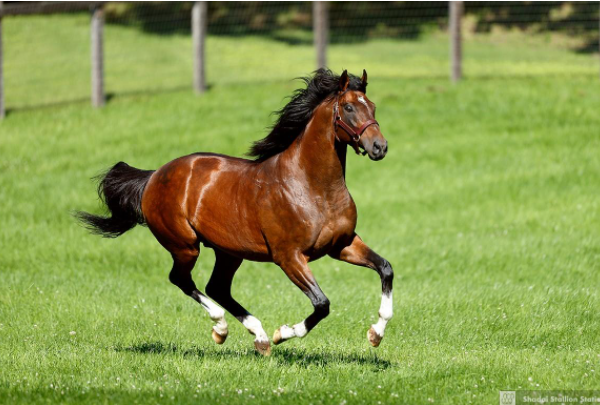 In 2013, Galileo’s (Sadler’s Wells) dominance in Europe, both on the track and subsequently in the broodmare band, prompted Coolmore to look East to the rising sun of Japan to source an outcross stallion to send a handful of their high-class Galileo mares to, namely the all-conquering Japanese champion sire Deep Impact (Sunday Silence).

Snowfall’s (Deep Impact) incredible 16-length victory in last Friday’s Epsom Oaks (Gr 1, 1m 4f) was yet another example of the late Deep Impact’s extraordinary influence when crossed with Galileo mares, as she became the second Classic winner bred on the cross, after Coolmore’s 2018 2,000 Guineas (Gr 1, 1m) winner Saxon Warrior. While the cross features a further two Grade 2 winners in Japan and French Group 3 winner Harajuku, all from just 31 runners.

In Australia, likewise, in the years since 1990 when Arrowfield’s John Messara first acquired Danehill (Danzig) to stand in the country, the gradual dominance of the stallion and his prevailing sire sons in the proceeding years saw Arrowfield, in 2019, to also look East to provide the sought-after outcross for their exceptionally-talented pool of dominant Danehill-line mares.

Indeed, the prospect for success of the cross can trace back through his lineage, with Maurice descending back to Hail To Reason (Turn-To), whose son Sunday Silence crossed with Danehill mares at a 36 per cent strike rate of stakes winners to runners, and included Australian Oaks (Gr 1, 2400m) winner Sunday Joy and American Grade 2 winner Silent Name.

Yet, in their headline Japanese shuttler Maurice (Screen Hero), he is showing the potential of clicking far beyond that, and his two contenders for this weekend’s J J Atkins Plate (Gr 1, 1600m) at Eagle Farm, out of a Tale Of The Cat (Storm Cat) and Invincible Spirit (Green Desert) mare respectively, are testament to that, as the Beast from the East seeks to claim a first success at the highest level.

“(The cross with Danehill-line mares) is exactly the reasoning behind it,” said Arrowfield’s bloodstock manager Jon Freyer, on the operation’s decision to shuttle Japanese stallions in 2019, and again in 2021 after a year hiatus induced by the outbreak of Covid-19.

“The horse that’s running in the J J Atkins, Port Louis, is out of a Tale Of The Cat mare and the other one is out of an Invincible Spirit mare, so there’s some very good blood there.

He, again, is out of a diverse bloodline through Host (Hussonet) mare Marli Magic. While earlier in the spring, and flying the flag for the Danehill-line mare, is the Peter and Paul Snowden-trained Mazu, who won a maiden at Canterbury before running third in the Pago Pago Stakes (Gr 3, 1200m) in a bid to qualify for the following week’s Golden Slipper (Gr 1, 1200m).

“We thought he (Port Louis) was about the pick of all our Maurice’s from that first crop,” said Freyer. “Katsumi Yoshida bought him privately when the Easter live sale was cancelled. From day one Ciaron Maher was giving us very good reports about him and and was very positive about him, and his judgement’s been vindicated, here he is in a Group 1 and he was probably a shade unlucky in the Champagne Stakes.

“The good thing is, he’s (Maurice) probably going to suit a lot of those (Australian) mares, and physically he suits them as well, he’s a big strong horse, but you can match him with a bigger mare and you get an admirable result. On all counts he’s working with a wide spectrum of mares.

“We’ve just finalised all our matings with our own mares and we’ll be looking to send him around 44 mares this season, so we’re really getting behind him.

“There’d be a good proportion of Danehill mares. When we balance up our portfolio, obviously with the likes of The Autumn Sun, Snitzel, Pariah and Showtime, we’re not sending a lot of the Danehill-line mares to them, so they’re going to the Japanese horses and the likes of Shalaa and Dundeel, so, I’d say it would be about 75 per cent, being mares with Danehill blood.”

This season, Arrowfield have bolstered their Japanese sire ranks with Admire Mars (Daiwa Major), a Group 1-winning juvenile, who went on to score at the elite level over a mile in Japan and Hong Kong.

“He’s an exceptional racehorse, a very good two-year-old, and competed internationally in Hong Kong successfully,” said Freyer. “He’s got a nice pedigree, he’s a very good looking horse. Daiwa Major we think will work very well with Danehill mares, he has in Japan, and I think he’s very competitively priced.

“We’ve recognised for some time that Japanese form and Japanese bloodstock is of a particularly high calibre, and we wanted to use a certain amount of it through the stud, with our broodmare band and obviously with the stallions as well.

“We’ve seen all around the world, wherever Japanese horses have competed, they’ve been remarkably successful, and now we’re seeing, with the likes of Snowfall and Saxon Warrior before them, that with Deep Impact they’re of a Group 1 standard in Europe.

“It would be foolish not to have an element of that in the stud and, if the right opportunity comes along, we’d be happy to invest further, but we’re very happy with what’s gone on so far.”

The only filly in Saturday’s J J Atkins field is the Gillian Heinrich-trained Invisible Tears, who arrives into the race after a luckless ninth in the BRC Sires’ Produce, and a second placing in the Champagne Classic, one of three times she’s filled the runner-up spot in her five-start career.

For Heinrich, it would be a poignant success, with the Gold Coast trainer having beaten cancer twice since 2015, five years after she saddled Military Rose (General Nediym) to success in the Magic Millions 2YO Classic (RL, 1200m).

“It’s been very exciting, and I’m actually looking forward to Saturday, because I think the mile will really suit the filly. She got a little bit held up last start, and although she was unplaced, it was a very good run. She couldn’t get out when she needed to,” said Heinrich to ANZ Bloodstock News.

“The Magic Millions win was my biggest win, but obviously the Group 1, for us as owners and for me as a trainer, would be really something, and right there on the top of my list.”

Invinsible Tears was purchased by her daughter, Tayla, for $220,000 at the Magic Millions Gold Coast Yearling Sale, and is the first foal out of unraced German mare Networking (Invincible Spirit), who Badgers Bloodstock purchased for £85,000 for Arrowfield Stud from the Godolphin draft out of the 2017 Tattersalls July Sale. Networking is a half-sister to Hong Kong sensation Pakistan Star (Shamardal).

“She’s just such a beautiful type. She’s got a really good shoulder, good girth, good thigh, everything that we like in a horse,” added Heinrich.

“She’s put it together already as a two-year-old which is pretty good, and I’m very happy with her.

“She’s looking for further a little bit down the line and I really think she’ll be a better three-year-old, so whatever happens she’ll be going out after today. I never really expected her to show up as a two-year-old, but she kept measuring up and we just kept going.”