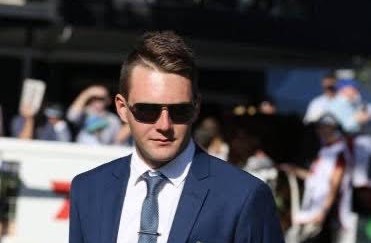 Being entrusted as the new trainer of former top class three-year-old Alligator Blood (All Too Hard) could be viewed one of two ways. It’s either a poisoned chalice or the opportunity of a lifetime.

Queensland horseman Billy Healey sees it as a chance to silence the horse’s growing legion of knockers and also as an opportunity for the 23-year-old to get himself on the Group 1 board as a trainer.

“It’s been a really good opportunity and I am extremely grateful to the owners for sending me a horse of this level,” Healey said.

“It’s been a long road back for him and he’s got a longer road to get back to that level but everything is on track and there’s no reason he can’t at this stage.

“You get up at 2am every day and strive to reach those goals of winning a Group 1 and to do it with a horse that people are righting off, who think he’s a has been, if I could ever get him back it would be a big feather in my cap and I don’t think there’s any reason why he can’t come back.”

Alligator Blood, the winner of the 2020 Australian Guineas (Gr 1, 1600m) and 2020 Queensland Horse of the Year, was originally trained by David Vandyke who, last spring, famously sacked the owners after deciding he didn’t want to train for them anymore.

The now five-year-old’s last run for Vandyke was in the Golden Eagle last October where he beat only three horses home in the field of 18.

As it turns out, “Al” as he’s more fondly known by his connections, had every reason to go off the boil.

He was riddled with so many physical issues that he “lit up the scintigraphy scans like a christmas tree” according to his part-owner Allan Endresz.

“People think I’m a nutter half the time but there was something wrong with him and that was putting pressure on other parts of his body,” said Endresz.

Eventually Alligator Blood underwent surgery for kissing spines which is a condition in horses in which two or more of the spinous processes (the flanges of bone sticking up from each vertebra in the spine) are positioned so that they touch or rub against each other. Horses suffering from this develop severe back pain, bone cysts, arthritic changes, and other problems.

Following what was a highly successful operation conducted by the University of Queensland’s Dr Ben Ahern at Gatton, Alligator Blood underwent months of intensive rehabilitation at John and Fay Robbins’ property on the Sunshine Coast followed by pre-training work with Billy Healey who is based nearby.

Initially it had been decided that, upon his recovery, the horse would be sent to Gai Waterhouse and Adrian Bott in Sydney to be trained for the next chapter of what was starting to become a controversial career.

But Covid-19 and a few associated logistical challenges put paid to that plan and connections decided to leave the horse right where he’d become the happiest he’d been in his life and that was in the very capable hands of his baby-faced pre-trainer.

“When Covid happened we stressed about Billy losing the relationship with Al . It’s like the Tommy Woodcock and Phar Lap scenario. We said why would we wreck that, let’s give Billy a go.”

After nearly 12 months on the sidelines, Alligator Blood returned to the race track last Friday in the Goldmarket Handicap at the Gold Coast (Listed, 1200m).

Carrying 61 kilograms top-weight, seven kilos more than his ten rivals who each carried 54 kilograms, he managed to run fourth beaten only 3.9 lengths by the winner Desert Lord (High Chaparral), who is ironically trained by David Vandyke.

“Horses don’t lose ability. He’s had a long time off and the run was extremely creditable with the massive weight drop the other horses had. He’s looking for a mile and a touch further now being an older horse,” said Healey.

Wise words from the ambitious young horseman who used to compete at a high level in show jumping and had designs on being a top level trainer since he was a boy.

“I’ve been around them all my life,” Healey continued. “I’ve always ridden and broke my first horse when I was 12.

“I knew before I left school that all I wanted to do was be a trainer and I have been lucky enough to do that.”

His late father Dale played a big part in being able to realise that ambition.

“He got his license so I could play around with it and get going. We bought a couple of tried horses and they turned out quite good.”

Tragically, Dale died in 2018, just three months after being diagnosed with terminal cancer.

His sudden passing left Healey, who was only 19 at the time, in charge of the family’s 50- acre horse property where he now bases his growing team of racehorses.

“With dad passing away it was very hard. I had his attitude and I got up the next day and went to work, more so to make him proud. He backed me from a young age and believed in me.

“It wasn’t something that I was going to walk away from. I won’t stop until I’m one of the best.”

The greatest thing Healey’s father taught him when it comes to training racehorses is patience, and with a challenge like Alligator Blood now on his hands he’s had to practice plenty of it.

“He’s a completely different horse now. You can take him anywhere and do anything with him. He still has his quirks but nothing like he did as a young horse. He’s settled down a lot.”

Allan Endresz says those changes have been noted by plenty of others close to the horse as well, including revered equine masseur Michael Bryant who used to work his magic on champion race mare Black Caviar.

“Michael went and saw Al two days before he raced last Friday. He was worried the horse would be a bit of a nutter and he could not believe the difference in the horse.”

Today Endresz and his fellow owners will sit down with Healey to map out the rest of his race plan from here which is likely to see him aimed at the rich Magic Millions carnival next January.

“Everyone needs an opportunity in life to show that they are capable,” the trainer said. “You can buy as many yearlings as you want until you are blue in the face but to get one with his ability, although he comes with his knocks, it’s a really big thrill for me and my team.

“I’d love to get him back to that level and show that we can do it from where we train and being a young person to try and get our name up in lights and be able to compete with the best will be an amazing experience.”

I can’t wait to see how this next chapter in the life and times of Alligator Blood unfolds. It’s been a riveting story so far.