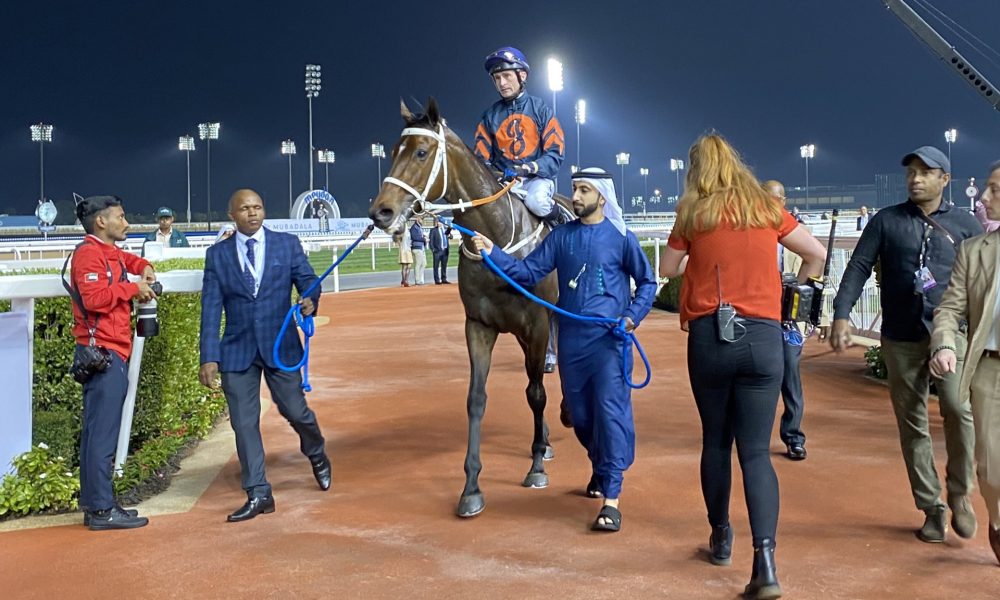 It was perhaps the most probable of improbable wins and the most remarkable of stories – albeit somewhat unheralded – and one which may have only just begun.

The filly was first-up at 1400 metres despite not having raced beyond 1100 metres in the country of her birth. As a southern hemisphere three-year-old, she conceded weight to all of her northern hemisphere-bred rivals, including runner-up Final Song (Dark Angel).

Bella Fever, who was foaled as late as July 2016, might have had nine months in age on Final Song but conceded her the same number of pounds.

She had also travelled more than 16,000 kilometres from Uruguay to Dubai via England and endured two surgeries on a hind fetlock.

The pundits largely dismissed her and, more surprisingly, her trainer – who may not be enjoying his best Dubai season with quarantine horrors diminishing his barn to just four – but he remains the man who put the jurisdiction on the international racing map and has won more than 20 of the major races conducted there.

In hindsight, the 20-1 (and better in some places) bet against her (and him) was patently absurd, even if she did become the first Uruguayan-bred to win in Dubai.

Bella Fever had won her four races in Uruguay by an aggregate of 27 lengths and clearly de Kock was on to something to be stepping her out to 1400 metres. She is raced by Jorge Wagner’s JLC Stables, who won the 2017 Dubai Golden Shaheen with now Shadai stallion Mind Your Biscuits (Posse), and Victor Azambullo.

“She’d shown us a lot of ability in her work,” de Kock told ANZ Bloodstock News from Johannesburg.

“I’d met Victor many years ago and he contacted us out of the blue, via Jehan (Malherbe), to see if we’d train the filly in Dubai.

“Naturally, you’re always a touch sceptical when someone says they have a very good one, and not many horses come out of Uruguay, but we were happy to take her.

“She’d had surgery on a hind fetlock in Uruguay but was clearly uncomfortable when she arrived in England around August last year.

“She had surgery again on the same fetlock to remove the pin, and Jane Chapple-Hyam did a great job nursing her, and then pre-training her, before she came to us late in the year.”

The protracted and adventurous undertaking was rewarded when Bella Fever, somewhat contrary to expectations, settled off the speed and finished with gusto to win in quite commanding fashion at Meydan.

“I expected her to race much handier but she missed the kick, which might have worked in her favour as they did run along,” de Kock continued.

“She settled well in running and finished the race off. I was quite impressed. She’s a beautiful filly, a very nice specimen. She is very temperamental, in an aggressive sense, but with a lot of ability.”

Stepping out to 1400 metres, despite her form profile, was not an issue according to de Kock.

“She wants a mile to be honest,” he said.

And a mile she now gets, all being well, with the $US800,000 Saudi Derby on February 29 her immediate target, a race run on the new programme at Riyadh, which features the inaugural $US20 million Saudi Cup.

“It’s on the dirt but we’re keen to have a crack and it’s a very good dirt track with minimal kick back,” de Kock added.

Looking further ahead, the UAE Derby – which de Kock has won six times – may beckon, but nothing is locked in according to the trainer, whose missions this year include establishing his operation in Australia with son Matthew, and re-establishing the strength of his Dubai stable.

Three of de Kock’s Derby winners have been South American-bred – Lundy’s Liability (BRZ) (Candy Stripes), Asiatic Boy (ARG) (Not For Sale) and Honour Devil (ARG) (Honour And Glory) – and he wrote of past forays on his website immediately after the win.

“This was an amazing win for Uruguay – well done to owners Jorge Wagner and Victor Azambullo. They took a gamble, had the courage to send her here when they knew how arduous the trip would be and saying that they could’ve kept her in Uruguay where she was beating everything,” he said.

“This reminded us of days gone by when we visited South America often and came back with horses that were competitive in Dubai. Belle Fever was courageous tonight after she played up a bit at the start. She’s a nice filly and was well prepared by our Dubai team of Declan Cronin, Shorty Feni and Thomas Ncume.”

Bella Fever is by Texas Fever (Victory Gallop) from the maiden Passionbabypassion (Unbridled’s Song). Texas Fever’s dam, Fortyniner Fever (Forty Niner), was an unraced half-sister to Kentucky Derby winner Fusaichi Pegasus (Mr Prospector), and Texas Fever himself was a Grade 3 winner in the USA before finishing sixth in the 2007 Breeders’ Cup Juvenile Turf.

Texas Fever is also the sire of Sir Fever, who came close to being Dubai’s first Uruguayan winner when he finished second to Mubtahhij (Dubawi) in the 2015 renewal of the Al Bastakiya. Mubtahhij was trained by de Kock and he went on to win the UAE Derby before beating all bar California Chrome (Lucky Pulpit) in the following year’s Dubai World Cup.

Sir Fever was trained by Charlie Appleby after being transferred from Jorge Piriz, who originally trained Bella Fever.

Texas Fever originally stood at the late Bob and Janice McNair’s Stonerside Farm, which they sold to Sheikh Mohammed in 2008. The McNair’s had bought the property in 1994 from Arthur Hancock III, whose father Arthur Hancock jnr had trail-blazed when he bought the Argentinian-bred Forli (Aristophanes) in 1967. Forli ran a track record at Hollywood Park on debut in North America.

The likes of Bayakoa (Consultant’s Bid), who won the Breeders Cup Distaff twice, and countless other North American stakes-winners were to emerge from South America.

They included the mighty Uruguayan-raced and owned (but Argentinian-bred) Invasor, who won 11 of his 12 starts, including the Breeders Cup Classic and Dubai World Cup. Brazil’s Gloria De Campeao (Impression) also won the World Cup.

Of course, a good horse can come from anywhere, which makes you wonder whether the South Americans and South Africans are generally underrated in the official world rankings.

The recent Gran Premio Carlos Pellegrini winner Nao De Mais (T. H. Approval) just might be a whole lot better than his official equal-112th world ranking suggests. We may find out later this year as his Argentinian success has secured him a place in the Breeders’ Cup Turf.

Of course, Australians have dabbled with South American stock. Breeder Ted Cockram imported a number of Argentinian mares in the 1980s and, on the track, we’ve seen stakes winners Savage Toss (Egg Toss) and Cefalu (Dushyantor) arrive from Argentina and Chile respectively, while Hussonet (Mr Prospector) has succeeded at stud.

However, just four of the 2267 horses imported to Australia in 2018-19 were from that continent. They might be worth a bigger punt than that!