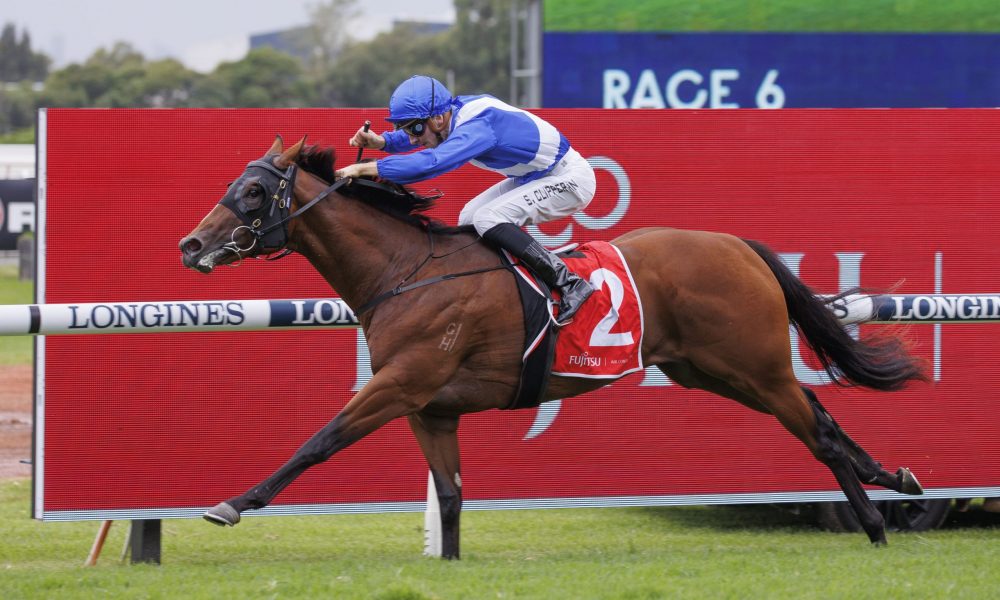 High-profile stallion prospect Best Of Bordeaux (Snitzel) could mirror the successful campaign used by Coolmore’s Group 1-winning sprinter Home Affairs (I Am Invincible) for the remainder of the spring by winning Saturday’s Heritage Stakes (Listed, 1100m), a result which could put The Everest (1200m) back on the colt’s agenda.

The Kacy Fogden-trained colt – purchased by Coolmore and partners after his three-start two-year-old campaign which concluded with a second placing in the Golden Slipper (Gr 1, 1200m) – was yesterday scratched from the Golden Rose Stakes (Gr 1, 1400m) in preference for the Heritage Stakes at Rosehill, a race won last year first-up by Home Affairs.

While Best Of Bordeaux has had two starts back from a spell, the latest when second to Golden Rose favourite In Secret (I Am Invincible) in the Run To The Rose (Gr 2, 1200m), Fogden and Coolmore have elected to bring the colt back in distance rather than run over the Golden Rose distance for the first time.

A winner of the Canonbury Stakes (Gr 3, 1100m) and Silver Slipper Stakes (Gr 2, 1100m) at Rosehill at two, the decision also means James McDonald – also In Secret’s jockey – can retain the ride on the Gerry Harvey-bred and co-owned Best Of Bordeaux.

Charlie Spicer-Jenkins, Coolmore Australia’s racing manager, told ANZ Bloodstock News that Best Of Bordeaux “rated well in both races” but connections in the end believed the Heritage was the best option for the three-year-old.

“He’s a classy colt and he could have been competitive in the Golden Rose, but in the back of our minds the Heritage served Home Affairs really well in his lead-up to the Coolmore and we thought that would be a race we’d consider for [Best Of Bordeaux],” Spicer-Jenkins said yesterday.

“When he drew barrier one in the Golden Rose we had to think about our options carefully, but he can be competitive from barrier five in the Heritage. He gets James McDonald in the saddle, so that’s also in his favour.”

Home Affairs won the Coolmore Stud Stakes (Gr 1, 1200m) at Flemington last October after finishing unplaced in The Everest and Spicer-Jenkins revealed Best Of Bordeaux remains under consideration for the Coolmore slot in the $15 million race.

He said: “I think we’ll wait for Saturday and see what that throws up and then we should be a bit clearer in our thinking [for The Everest] … but obviously it’ll be our preference to have a horse that we have ownership in going into a race like The Everest.”

After being ridden off the speed for the first time when finishing fifth in the San Domenico Stakes (Gr 3, 1100m) at Rosehill on August 27, a race won by Sweet Ride (Deep Field), Best Of Bordeaux returned to his pattern of leading in the Run To The Rose and it is expected the colt will again be a front-runner on Saturday.

“He’s clearly got the speed and that’s one of his greatest assets, his cruising speed,” the Coolmore racing manager said.

“There’s probably going to be a bit of rain in the next couple of days, so we’re going to have to consider how that will affect the running, but he is a horse who looks like he’ll get through heavy going [as he did in the Golden Slipper]. He’s quite a versatile colt.”

Despite Best Of Bordeaux being taken out of the Golden Rose, the Coolmore colts partnership remains double-handed in Sydney’s premier three-year-old spring race via the Chris Waller-trained pair Political Debate (So You Think), the Phoenix Stakes (Listed, 1500m) winner last campaign, and fellow colt Basquiat (Snitzel), third in the Up And Coming (Gr 3, 1300m) and Ming Dynasty (Gr 3, 1400m) in two starts this preparation.

“Political Debate has got a good jockey in Kerrin (McEvoy) and he has barrier 13, but ultimately it’s a good lead-up race for him (to the Caulfield Guineas),” Spicer-Jenkins said.

“He probably performed to his best in that mile in the JJ Atkins when he was a long neck behind the winner (Sheeza Belter), so his last start over six furlongs was slightly sharp for him but, again, it was a lead-up race into this race which will ultimately lead into a mile race (Caulfield Guineas).

“He’s a horse who I think will just keep on getting better.”

Basquiat, a $1.9 million Magic Millions Gold Coast Yearling Sale graduate in 2021, also drew wide in the Golden Rose, coming up with barrier 12, and Spicer-Jenkins was wary of the strength of the fillies who so far have had the edge over the colts and geldings at two and three.

“He’s definitely starting to come into fitness, that horse, and I think he should be able to finish off quite strongly,” he said.

“There’s obviously some strong fillies in that race, but he can be competitive as far as the colts go.”