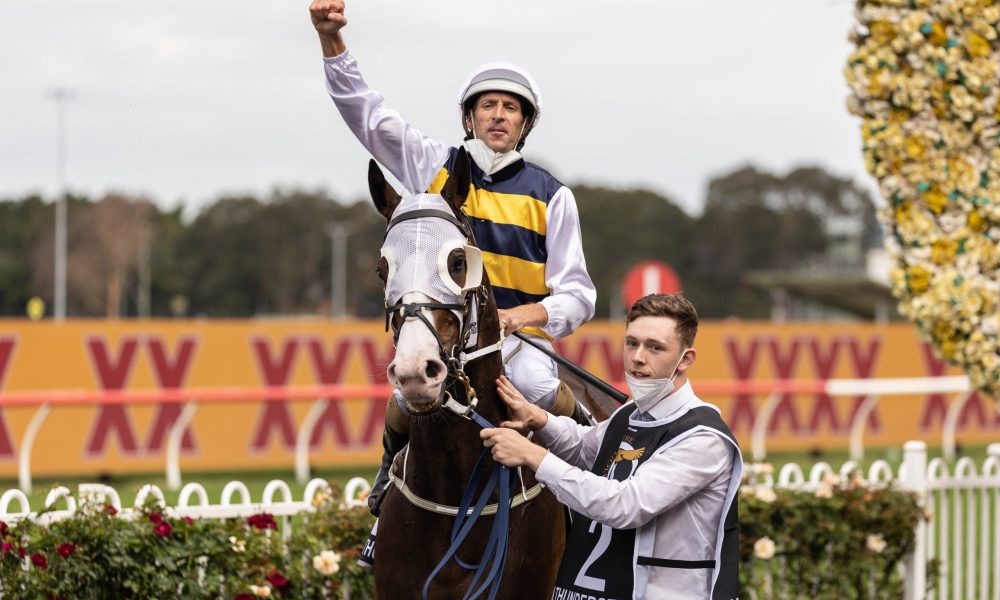 Competition between the heavy hitters, Racing NSW and Racing Victoria, extended to week three beyond the once typical Sydney Spring Carnival.

Week one of this new scene saw The Everest up against the Caulfield Cup. The sprint drew a fabulous field.

Week two pitted the Cox Plate against the newly instituted $2 million Invitation Plate (1400m) for mares. Despite the Cox Plate losing the favourite, Zaaki (Leroidesanimaux), a great contest played out and the field remained top class.

Meanwhile, in Sydney, with not a black-type race in sight, Rosehill’s ten-race card laid out $10.7 million, the Golden Eagle (1500m) attracting the best four-year-olds around while the feature sprint, the Classique Legend Stakes (1300m), was almost a re-run of The Everest.

This is a remarkable turn of events in a very short space of time.

Flemington’s fields were very good, albeit the Derby left something to be desired. The best older sprinters remained in Sydney, racing for a cool $1 million. The best four-year-olds chased the $7.5 million of the Golden Eagle, the third richest race in the country.

Neither Sydney race was of any assistance to breeders.

One subject to be debated is the pattern of racing combined with the much desired Group or stakes black type, now the foundation of the breeding industry.

The pattern has been chewed up in favour of big money. Owners and trainers have spoken. They like it and the results have been thrilling for punters, who are, needless to say, the lifeblood of the entire racing and breeding industries.

Overall, Racing NSW have proved to be innovative, dynamic and progressive and are not shy about ruffling a few feathers. A major shake-up, if you will.

This past week major Australian buyers have been very active at northern hemisphere sales, scooping up proven racehorses and horses in training. In that light, Racing NSW have turned on a flashing green light and buyers have reacted accordingly. NSW is the envy of the racing world.

The new reality is that any horse with talent, whether in New Zealand or England, is very quickly identified, snapped up, and is off to race in Australia.

Little Avondale Stud in the Wairarapa, Rich Hill Stud in the Waikato and Westbury Stud, near the Karaka sales venue in South Auckland, all had something to cheer after Saturday’s racing.

Little Avondale’s Per Incanto (Street Cry) scored a double, the first leg of which through Justacanta in the Linlithgow Stakes (Gr 2, 1200m) at Flemington. The now eight-year-old, from Per Incanto’s second crop, has found a new lease of life since transferring recently from New Zealand to Victoria. It took 50 races before he broke through for his maiden stakes win (also at Flemington) two starts back in the Paris Lane Stakes (Listed, 1200m).

Clearly, he enjoys the straight six and returned on Saturday to add career win eight and take his earnings beyond $450,000.

At Awapuni, Little Avondale sires featured twice, first with Per Incanto’s second winner of the day, Kick On, who is three from eight and has a good future.

The best performance representing Per Incanto, however, was not a winning one. His Lost And Running put in some big strides late to get within a length of the flying Eduardo (Host) in the Classique Legend, the major sprint on the Rosehill card and which drew a super field. Lost And Running is one to watch in the big sprints next autumn. He may well prove typical of the Per Incantos. They improve with age.

Per Incanto’s success did not end in the southern hemisphere, as victory for Lightning Storm on his first Hong Kong start at Happy Valley on Sunday cemented the sire’s position at the top of the Hong Kong sires premiership.

Per Incanto’s barn mate, Nadeem (Redoute’s Choice), also has a promising sort in Wild Moose who was third in the Levin Classic (Gr 1, 1600m) in January. The four-year-old, bred by Little Avondale staff member Helen Phinney, is two from seven and took out the Redraze Bowl, an open handicap over 1400 metres.

Rich Hill Stud are, no doubt, popping the champagne corks after the determined win by I’m Thunderstruck (Shocking) in the rich Golden Eagle (1500m).

The four-year-old is one of the finds of the season so far. His tenacity, not least to get up off the deck when knocked sideways, is something to behold. He simply doesn’t know anything except to get to the line first, which he has done six times in only nine starts.

A hallmark of the gelding’s races is his storming finish, shown to effect in the Toorak Handicap (Gr 1, 1600m) at his previous start. Considering the Golden Eagle was his first go clockwise and that he was lumping 5.5 kilograms more than in his last two starts, his winning performance was first rate.

He can carry weight. In his last race at three he managed 60kilograms. Weight-for-age miles should be no problem. Neither should 2000 metres.

For Rich Hill’s Shocking (Street Cry), the huge payday will have a major effect on his ranking on the Australian sire premiership and therefore promote the stallion to those all-important Australian buyers. The stallion’s Elephant is very talented but I’m Thunderstruck, the sire’s best advertisement yet, has set himself up as one of the premier milers in the land.

In Singapore, Shocking made it a weekend double siring Sayonara. These are timely victories for the sire as he celebrates the twelfth anniversary of his 2009 Melbourne Cup (Gr 1, 3200m) win on Tuesday.

Five weekend winners in three countries can be attributed to Westbury Stud. Lord Ardmore (Reliable Man) snared a nice race at Rosehill. Another by Reliable Man (Dalakhani) is She’s a Maneater, who was too strong to gain her third win (in only eight starts) at Tauranga.

El Roca (Fastnet Rock) keeps firing out winner after winner (23 on both sides of the Tasman this season alone) plus Arion Passion, a Singapore winner on Saturday.

Makfi (Dubawi), who stood at Westbury until 2016, is proving to be a serious loss to the New Zealand stud scene. The stallion sired a double on the weekend headed by new stakes winner Frontman in the PRH Transport Trophy (Listed, 1600m) at Tauranga. The other was Wild Imagination over in Adelaide.

In an appropriate segway to this chapter, Frontman became the sixth individual stakes winner for his dam Imposingly (Zabeel), who qualifies as a Blue Hen, in spades.

Already recognised by the New Zealand Thoroughbred Breeders’ Association via their annual Broodmare of the Year, a title she achieved in 2017, Imposingly is a breeder’s dream.

A frequent traveller across the Tasman, Imposingly has enjoyed her greatest success when mated with Makfi, the result being three stakes winners.

One, in particular, is the outstanding mare Bonneval, a dual Oaks-winning triple Group 1 champion. Bonneval was purchased by Waikato Stud upon her retirement and her two foals to date are both fillies, which means it might be a while before any of her foals are offered for sale. That is due to Waikato Stud’s wise policy of retaining at least the first two fillies from their mares, a strategy which has paid off handsomely.

Bonneval produced an I Am Invincible (Invincible Spirit) filly in 2019, a Savabeel (Zabeel) filly in 2020 and was covered by Super Seth (Dundeel) last season.

Imposingly’s first stakes winner was Full Of Spirit (Flying Spur) who raced successfully in New Zealand and Australia, taking out the Adrian Knox Stakes (Gr 3, 2000m) at Randwick and was Group 1 placed here in the Makfi Challenge Stakes (Gr 1, 1400m) at Hastings.

Domiciled in Australia the last three years, Imposingly produced a filly by Pierro (Lonhro) in 2019 and a colt by Dissident (Sebring) last year. She was covered by The Autumn Sun (Redoute’s Choice) last spring.

From ten named foals she has produced nine winners but, most importantly, six stakes winners, putting her in a very special category.

Bob Peters, rightly referred to as a “Breeding Maven” by ANZ Bloodstock News’ It’s In The Blood columnist Trevor Marshallsea, has yet another outstanding runner waiting in the wings to plunder the riches of New South Wales and Victoria.

His name is Western Empire (Iffraaj) and, while many will not have seen the four-year-old’s scintillating performance in Perth due to the time difference, if you get a chance, take a look at his win in the Asian Beau Stakes (Gr 3, 1400m) at Ascot on Saturday.

A more impressive win you will not likely witness, especially over this past weekend.

The manner in which he joined in at the 200 metres then bolted clear and cantered to the line should give any east coast competition some pause. He was having his first run since winning the Western Australian Derby (Gr 2, 2400m) in April and the Asian Beau was his fifth stakes win in succession.

Peters knows what it takes to take on, and beat, the best in the east. He has achieved it recently with Arcadia Queen (Pierro) and cemented that with Saturday’s Cantala Stakes (Gr 1, 1600m) winner, multi-millionaire Superstorm (Sebring).

Western Empire might be even better. Watch this space.

Qualifying as a Peters homebred, Western Empire was, nonetheless, foaled in New Zealand, with Peters having sent his dam, Western Jewel (Jeune), herself a Perth Cup (Gr 2, 2400m) winner, to be covered by Iffraaj (Zafonic) for three successive seasons. There are two more brothers to follow.

Iffraaj shuttled to Haunui Farm until 2019 (12 seasons), making his presence felt in a major way. Now a sire of sires, producing stallions such as Wootton Bassett, Haunui Farm’s Ribchester and Windsor Park Stud’s Turn Me Loose, his name will doubtless live on.

As well, his grandson, Cambridge Stud’s Almanzor (Wootton Bassett), is one of New Zealand’s “buzz” sires and is already the sire of eight winners including two stakes performers in his first northern hemisphere crop.

Iffraaj was a fabulous edition to New Zealand’s sire ranks. He is alive and well, living out his days at Dalham Hall Stud in Newmarket, England, but now relieved of his annual sojourn to New Zealand.

Icing on the cake

The mare does not win out of turn but this season is her best yet, scoring two stakes wins within her last three outings and taking her earnings to beyond $330,000.

Her Cup win was also her easiest. Five-deep turning for home and taking some time to wind up, she found her rhythm near the 100-metre mark, then ran away by an easy three and a half lengths.

Being a half-sister to Listed winner Sinarahma (Darci Brahma) and from four-time Group 1 winner Shez Sinsational (Ekraar), House Of Cartier has plenty going for her and will be a welcome addition to New Zealand’s broodmare ranks where her foals will be very much in demand.

Following up on last week’s report on Icebath (Sacred Falls), you can now add a further $360,000 to her earnings. The mare remains stakes placed, and went within a short half head of becoming a Group 1 winner and, even though her bank account now stands at $3.741 million, $3.425 million of her total is from one win and three second placings.

She is obviously very talented and deserves the bold caps but, in the meantime, that’s quite some consolation prize.

A few weeks back this column discussed the doubling up of the dam lines present in the bloodlines of German-bred and raced Torquator Tasso (Adlerflug), winner of this year’s Prix de l’Arc de Triomphe (Gr 1, 2400m).

The subject revealed that Torquator Tasso’s sire Adlerflug (In The Wings) is a grandson of Alya (Lombard). The Arc winner’s fourth dam, Allegretta (Lombard), is a sister to Alya.

The incomparable Urban Sea (Miswaki), dam of Galileo (Sadler’s Wells) and Sea The Stars (Cape Cross), is a daughter of Allegretta.

His sire, Galileo, is a son of Urban Sea and therefore a grandson of Allegretta. Great House’s granddam, Allez Les Trois (Riverman), is also a half-sister to Urban Sea, thus he is bred 3×3 to Allegretta.