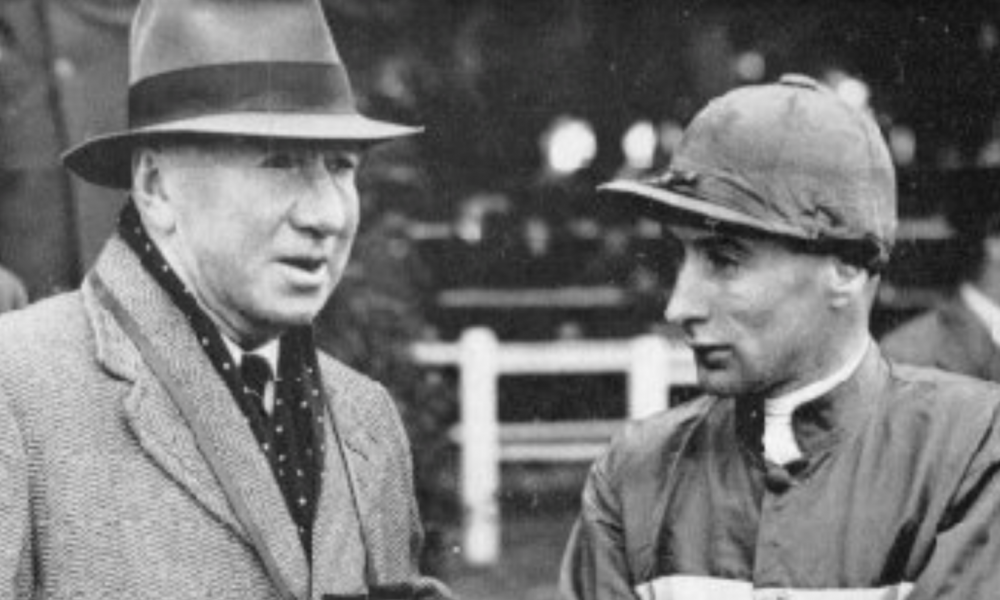 His international tally of Group 1 wins was bettered only by Scobie Breasley and Togo Johnstone among our “Incomparables” – the Australian jockeys who had sustained and remarkable success in England, Ireland and France from the 1900s to the 1970s.

At home, his resume included six Melbourne jockeys’ premierships and victories in the Caulfield and Melbourne Cups and the Cox Plate among numerous major race wins.

The jockey, nicknamed Weary Willie, featured in the famous triple dead-heat in the 1956 Hotham Handicap and was, of course, famously aboard Rising Fast in the 1955 Melbourne Cup. He’d won the Caulfield Cup, that year, on the great New Zealand-bred stayer who’d won the two Cups and Cox Plate treble 12 months earlier.

Rising Fast, with 63.5 kilograms, was beaten a length in that 1955 Melbourne Cup by Toparoa who had 15.5 kilograms less and whose rider Neville Sellwood was suspended for two months for causing interference to Rising Fast. No protest was lodged.

Williamson purportedly said Rising Fast was tiring under his weight and the interference did not have any bearing on the result. Perhaps it was just not his style to protest; it certainly wasn’t to elaborate at length on any race outcome.

Some sources say his nickname was borne of his impassive response to either victory or defeat. Others point to a sleepy-eyed look, laconic nature, dry wit and a slow-measured stride. He disliked self-promotion.

It’s believed he never bothered to add up the number of winners he rode and could be vague about his successes and even the names of champions he had ridden.

Perhaps it was this understated approach that his name is less readily recalled, than say a Breasley or George Moore, when Australia’s great jockeys are discussed.

He was, at the very least, among them and it is some distinction that he relegated Lester Piggott to second prize in each of his Prix de l’Arc de Triomphe wins, aboard Vaguely Noble (1968) and Levmoss (1969).

Piggott is believed, after Williamson’s second Arc win, to have described him as “the best big-race jockey in the world”.

His compatriot and fellow Arc winning Incomparable, Pat Glennon had no doubt where Williamson ranked. “Bill is the finest jockey I’ve ever ridden against, including Moore, (Yves) Saint-Martin and Piggott,” he said.

Ron Hutchinson, another Incomparable, says: “Williamson and Breasley were the best two jockeys I’ve ever seen.”

Jockeypedia’s biography asserts that Williamson “enjoyed a highly respected career where he was held in greater esteem than either Scobie Breasley or Ron Hutchinson, both of whom excelled in Europe.”

Michael Phillips, racing correspondent of The Times during this era, described Williamson “as the finest rider to leave Australia”.

Williamson rode in Malaya in 1959 but left Australia, more permanently, in 1960, when reportedly lured to Ireland by trainer Seamus McGrath and they would combine to win the Arc nine years later. He scored two of his eight Irish Classic wins in his first year – both for John Oxx senior with whom he’d combine for a further four Classic wins in Ireland between 1960 and 1996.

He would later win the 1,000 Guineas, in 1969, for Paddy Prendergast while his final major success in Ireland was in the 1972 Irish Derby on Steel Pulse with compatriot Hutchinson in second on Scottish Rifle.

Steel Pulse was trained by Scobie Breasley, who’d retired from riding four years earlier, and was owned by Indian shipping magnate Ravi Tikkoo for whom Williamson would later act as racing manager.

The following year, Steel Pulse was secured for a reported $675,000 (and syndicated at $15,000 a share) by Fred Peisah to stand at his Lomar Park Stud in New South Wales. “He is the greatest stakes winner imported to Australia — and by far the most costly,” reported the Canberra Times.

The Derby win was tagged, in the press, as “tremendous consolation” for Williamson who’d earlier that year lost the Epsom Derby mount on winner Roberto to Piggott.

Williamson had been injured in a fall at Kempton 12 days before the Derby but had been cleared to ride. However, Roberto’s owner John Galbreath was unconvinced and his argument apparently was that he wouldn’t have fielded a ball player in a game on those terms (he was owner of the Pittsburgh Pirates baseball team). Williamson was offered the winning percentage and said to Piggott: “I don’t mind. I’m getting the money anyway.”

Williamson was certainly fit to ride as he landed a double on the same Epsom card and one writer observed that “the wild ovation he received from the crowd made plain its sympathy for him”.

Breasley was, unsurprisingly, well acquainted with Williamson long before they teamed up to win that Derby. “When I went to England in 1950, I was number one rider in Victoria and Williamson was second on the list. He knocked on my door the actual night before I left for England and asked that, given that we were no longer rivals, could I please help him become a better jockey.

“I told him that he never seemed to try to get a good start with his horses and that he was also too content to sit four or five deep. I told him to concentrate on his starts, and to find the fence more often. He listened to my advice and became a better jockey,” Breasley said, according to alchetron.com.

The Epsom Derby may have eluded him but you sense Williamson was not inclined to dwell on such things and, just a few years earlier, he’d been the toast of the racing world with his triumphs in Paris.

His 1968 winner Vaguely Noble was celebrated to say the least. His sire Vienna was bred by Sir Winston Churchill and his grandsire Aureole bred by The Queen.

Vaguely Noble was foaled in the year of his breeder Major Lionel Holliday’s death and the family, faced with huge death duties on the Major’s estate, reluctantly offered him at the December Sales despite two commanding wins at the close of his two-year-old season.

He made a then world record public auction price of 136,000 guineas, sold to American plastic surgeon Dr Robert Franklyn. He entrusted his training to Etienne Pollet who three years earlier had won the Arc with Sea Bird (ridden by Australian Pat Glennon).

The Arc was the only option for Vaguely Noble as he was not entered for any Classic races and it was mission accomplished courtesy of a copy-book Williamson ride which ensured a three-length win from a field which was reckoned to be not much inferior to the quality line-up which Sea Bird had despatched.

The following year, amid less fanfare, Williamson did it again – this time claiming the great race on 50–1 chance Levmoss, who was owned and trained by McGrath, whose faith in the Australian jockey was well rewarded, albeit after a long wait since the jockey’s arrival in Ireland.

Brian Stoddart, in the Australian Dictionary of Biography, writes of Williamson:  “He left Mordialloc-Chelsea High School at age 14 and was apprenticed to the trainer F. H. (Fred) Lewis; he and his brother the jockey Robert Lewis were Bill’s great-uncles. Williamson’s first winning ride was in 1937 on Lilirene, coincidentally the last winner that Bobby Lewis had ridden.

“On 5 January 1942 Williamson was mobilized for full-time duty in the Militia. He served in Melbourne as a driver with the 119th General Transport Company and as a clerk at the Bulk Stationery Store. Discharged from the army on 30 October 1944, he returned to the racetrack.

“On one occasion in 1946 Williamson missed his train and had to hitchhike to a race-meeting at Albury, New South Wales. Engaged for five events at the meeting, he triumphed in all of them.”

Williamson died of cancer on January 28, 1979 at South Caulfield.