Blaxland goes stateside once more in search of outcross gold 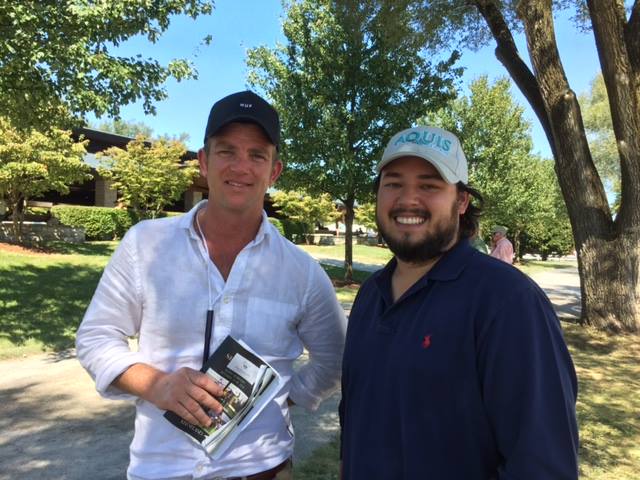 A cohort of Australian buyers have set sail for the US and the ten-day Kentucky breeding stock sales extravaganza in a bid to bolster their own and clients’ broodmare pool with potent outcross US bloodlines.

One of the most successful in sourcing US mares and race fillies since he first ventured to the US sales 15 years ago is Queensland-based agent Julian Blaxland, who will today arrive in Kentucky ahead of the Fasig-Tipton and Keeneland breeding stock auctions, which begin tomorrow.

“I’ve had a bit of luck there. It’s a great source of outcross stock which crosses really well with the Australian speed horse,” Blaxland said, having pored over the near 4,000 race fillies and mares on offer at the flagship sales.

“I think for the sheer number of horses that are on offer there, you can actually find value if you do the work.”

Blaxland’s most recent success stories include the US$500,000 buy of Smart Strike (Mr. Prospector) mare Vintage Strike in 2014, who at the yearling sales saw her first four produce sell for a combined $1.1 million, of which featured Aim (Star Witness), winner of the Magic Millions 3YO Guineas (RL, 1400m) in January and last month’s $500,000 Silver Eagle (1300m).

Miss Charming (Forestry), the dam of Letzbeglam (Snitzel), last year’s Blue Diamond Prelude (Gr 2, 1100m) winner, was also sourced by Blaxland, who parted with US$180,000 to bring the maiden winner to Australia.

Letzbeglam, a AU$280,000 buy for Cambridge Stud at the 2019 Magic Millions Gold Coast Yearling Sale, is one two Australian-sold progeny for Miss Charming, the other is the stakes-placed, $200,000 yearling buy Snazz n Charm (Snitzel).

“Sometimes it’s a battle to convince Australian breeders to buy bloodlines that they’re not familiar with, but I think with the internationalisation of thoroughbreds over the last 30 to 40 years, Australians are now pretty savvy as to what’s good form and what’s not,” Blaxland continued.

“A lot of the lines have been used out here to great success. There have been seven Group 1 winners (since August last year) out of American mares, so we’re getting more and more used to seeing American pedigrees in our catalogues.

“I don’t think it’s anything new, these American mares, but while stakes mares are so expensive in Australia – the mare market is as strong as it’s ever been – it probably puts the American market on par with ours. So if you can go to America and buy outcross stock, for similar money with what you’re buying Danehill stock here, then it’s worth importing these mares.”

Blaxland’s annual visit to Kentucky in search of US mares has been hit by a two-year Covid-19-enforced absence, but at the 2020 sales he still sourced the stakes-placed mare Complicit (Blame) for US$95,000 from Keeneland, while he has bought for clients including Yarraman Park and Newhaven Park Stud in recent years.

“I’ve got four or five big breeders down here who are keen to see what I can find over there. And then we’ll try and buy a couple of cheaper mares for Newington Farm for ourselves,” Blaxland said.

“I think physicality is the most important thing. You’ve really got to imagine the horse getting off the truck at Yarraman Park or Newhaven Park Stud, so you’ve still got to stick to buying an Australian-style mare, with good feet and good bone, as opposed to the tall, narrow and small-footed American horse that you see over there.

“Whether they ran on turf or dirt, I think that can become irrelevant.”

While Blaxland has purchased all over the globe, it is the American sales that have had the greatest influence on his career as an agent and consignor in Australia, with the jurisdiction being the principal source of inspiration for his burgeoning success with Blue Sky Premium Consignment and his Biddaddaba-based Newington Farm.

“It was Vin Cox who encouraged me to get over to Keeneland years ago and he’d been banging the drum for a while,” Blaxland said.

“I got the idea for my Blue Sky race fillies and mares consignment from Brad Weisbord and his Elite Sales over there. I was walking down with Vin Cox looking at one of Brad’s consignments and I said ‘I wonder if that will work in Australia’ and Vin said ‘absolutely’.

“The breeding stock sales in America, the way they’re run so professionally, it really is the benchmark, in my opinion. And that’s what we’ve tried to replicate with our consignment here. You feel like you’re at the Superbowl for breeding stock when you’re at Fasig and Keeneland.”

Australian buyers including Blaxland, John Muir and Scott Holcombe from Milburn Creek and Craig Rounsefell of Boomer Bloodstock will be on-site, while agents such as James Clarke will be operating the sale from Australia.

“I am going through it in fine detail. I’ve spoken to my client to try and buy a mare and hopefully we can find something.

“There’s obviously plenty of different angles that you can take for Australians wanting to buy mares out of America. There’s pregnant mares worthy of consideration, there’s fillies off the track, there’s fillies from Europe with European pedigrees who have been sent to America to race and, of course, mares that have had foals and are currently empty. There’s plenty of different angles and opportunities.

“It certainly would be much easier if I had the flexibility to jump on a plane and go over myself but unfortunately I’m not going to make it. Hopefully next year I can.”

The 273-lot Fasig-Tipton November Sale will take place tomorrow, from 2pm (local time, 6am Wednesday, AEST), while the 3,882-strong Keeneland November catalogue will run from Wednesday, November 10, through to Friday, November 19.