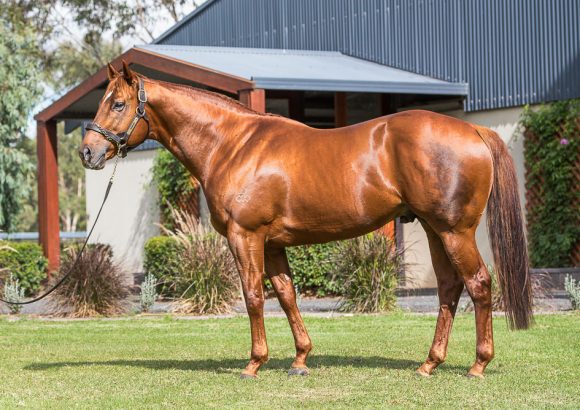 While most of Australia shivers through week 52 of the only season that matters, there is at least something that’s hot at the moment. His name is Sooboog.

The son of Snitzel (Redoute’s Choice) is approaching his sixth spring at Kitchwin Hills, where he’s had a fee drop from $13,200 (all fees inc GST) to $8,800. Standing stallions is always at first a waiting game, often a decidedly delicate one, and had Kitchwin been able to hold off a little while, you might wonder where the fee might have been set.

Since July 17, Sooboog has delivered no fewer than seven winners and since early March when his fee was set, his progeny have earned 24 wins in Australia, for 56 per cent of all the stallion’s wins this season.

The septet have given the rising ten-year-old a flying finish to the campaign, lifting him to 16th on the second season sires table, and equal eighth there by winners, with 32 from 101 runners.

No stakes winners have yet emerged, though he’s had two black-type placegetters: first-cropper Birdsville, sold by owner-trainer Peter Moody to Hong Kong after a second-start Group 3 third at Flemington, and Port Albert, a Nick Ryan-trained two-year-old with a Caulfield Listed third among two runs.

But Sooboog’s best-yet may be about to put her mark on things, as the progeny most likely for black type success.

Boogie Dancer, an impressive chestnut bred by Victoria’s Rushton Park from the great female family of Eight Carat (Pieces Of Eight), and racing from the old factory of Moody and Wylie Dalziel, made it three wins on end from just four starts in the prestigious VOBIS Gold Ingot (1400m) at Caulfield last Saturday.

That was part of a three-state winning treble for Sooboog on the day. Fraction Late may have won away from the mainstream in Darwin, but his other one was Kim Waugh’s two-year-old gelding True Crime, sole winner on what became a one-race card at soggy Randwick.

After victories at Donald and Sandown, Boogie Dancer has entered discussions for the Thousand Guineas (Gr 1, 1600m) in the spring. That would be a neat place to start for Sooboog as a producer of stakes winners, but Kitchwin is hopeful if his current trajectory continues, black type success will come sooner – and with good reason.

The imposing chestnut’s results this season, especially the past couple of months, are a strong follow-up from 2020-21, when he was 15th among first season sires with ten winners from 32 runners. More success may come tomorrow when Matthew Smith-trained juvenile Golden Fighter, winner of four straight barrier trials and the topic of concerted interest from Hong Kong, debuts at Goulburn.

Kitchwin stud master Mick Malone has long had faith in Sooboog. He’d been involved in the yearling purchase of his older sister Snitzerland (from Monte Rosa, by Caulfield Cup-winner Fraar) for breeder Neil Werrett, and cheered her subsequent six stakes wins including the VRC Lightning Stakes (Gr 1, 1000m) of 2014.

A few weeks after that triumph, Kitchwin didn’t quite have the bullets to buy the yearling Sooboog when he fell to Sheikh Mohammed bin Khalifa Al Maktoum for $1.5 million at Easter. But after following his career under Team Hawkes and Darren Weir closely, Malone swooped to seal the purchase of the entire after the latter trained him to his sole stakes win, the Aurie’s Star Handicap (Gr 3, 1200m) at Flemington in 2016. The four-year-old had two more, unplaced, runs before standing his first season in 2017.

Malone is now optimistic the past couple of months – which have taken Sooboog’s stud statistics to 41 career winners from 110 runners – are an encouraging sign of good things coming to those who wait, when it comes to sons of Snitzel at stud.

“Now it’s a bit of a waiting game, like with all of them,” Malone told It’s In The Blood. “Whether it’s a racehorse or a stallion, it’s just a time thing.

“The past few weeks have been rewarding. It does feel a little late, but maybe we’re all too impatient with these horses.

“I think he’s building some momentum. And with all these stallions, if you look at what Shamus Award has done, again by Snitzel; he was a horse Widden let go because he wasn’t going to be a good sire, and now he stands at $80,000 at Rosemont.

“Sooboog has a beautiful pedigree, and he’s out of a Fraar mare. That might be why he’s one of these Snitzels whose stock do need a bit of time. Shamus Award has proved you don’t have to rush them, and although Snitzel does get plenty of two-year-olds, they definitely race on.”

Malone speaks with as much confidence as the game allows of a continued upswing for Sooboog, as handsome and powerful son of Snitzel as you’ll find, and who generally sires accordingly.

“We’re relaxed. He’s got 130 two-year-olds, and he’s just left too many nice horses for something not to happen,” he says.

“Sooboog’s got the Snitzel neck, a beautiful Snitzel head, he’s really strong, and he stamps his stock just like Snitzel. At $8,800, I can guarantee people won’t be disappointed in the foal they get. It’ll have all the things you want, commercial appeal, size and substance.”

For Dave and Kayley Johnson, who left Western Australia to take over the boutique Rushton Park 14 years ago, Sooboog was an easy choice when deciding the mating that produced Boogie Dancer.

They’d bought their mare, Search For Fame (Quest For Fame), in foal to Epaulette for $28,000 at the Inglis Broodmare Sale of 2017. Though she’d only placed once in five starts, the price seemed cheap given her powerful female line.

Her dam Catecombe (Papal Power) had also produced Impaler (Dracula), winner of Group 2s in the Hobartville and the Challenge Stakes (Gr 2, 1000m). Her third dam was Cotehele House (My Swanee), who threw the outstanding Danehill brothers Danewin (five Group wins and sire of 25 stakes winners) and Commands (only two lower level stakes wins, but an unqualified success at stud, with 74 stakes winners including champion Melody Belle).

This, of course, means we run into the great Eight Carat, Cotehele House’s mum, and Boogie Dancer’s fifth dam. Imported from Britain for a brief Australian stint before switching to New Zealand in 1983, she left a stunning five Group 1 winners, headed by the champion Octagonal (Zabeel).

And Eight Carat just kept on giving, becoming one of the most influential broodmares seen in these parts, appearing in the pedigrees of numerous worthies, including in a 5Sx5D cross in that of another champion, Verry Elleegant (Zed).

Kayley Johnson, Rushton’s chief mating planner, was enticed by the fact Sooboog over Search For Fame would bring 6Sx5D gender-balanced crosses of Nijinsky (Northern Dancer) and Mr Prospector (Raise A Native), a 6Sx6D of Star Kingdom (Stardust) through Biscay and Todman, and a 7Sx7D of the influential US sire Tom Fool (Menow), through sons Silly Season and Buckpasser.

The physicals sealed the deal.

“Sooboog is just a fabulous physical specimen,” Dave Johnson says. “He’s beautiful, correct, neat and tidy, and with Search For Fame being a big, rangy sort of mare, I thought the cross would tidy her up a bit, which it did. Boogie Dancer was what we expected to get.”

Still, Johnson was “bitterly” disappointed the yearling Boogie Dancer could fetch only $50,000 when knocked down to Moody and Dalziel at Inglis Premier in 2021. Older half-sister Miss Exfactor (Your Song) had become Search For Fame’s first stakes winner a year earlier in taking Rosehill’s Birthday Card Stakes (Gr 3, 1200m). But agonisingly for Rushton, the Epaulette (Commands) colt they’d birthed – Armour Eagle – was just two weeks off starting an opening flourish of two Doomben wins and an Ipswich second which brought a swift purchase from Hong Kong.

“We thought about holding onto Boogie Dancer, but we’re in the business of selling horses. And we’d got stuck with a couple of fillies we couldn’t sell because of X-rays. They’re probably not as good as Boogie Dancer!” says Johnson, still managing to smile.

There’s a little more angst in the fact the Johnsons also sold Search For Fame, after she’d missed for two years running, through Inglis’ 2020 December Online Sale – for all of $800. They considered buying her back when she appeared at Inglis’ April online sale this year, but opted not to, the 16-year-old going to Viv Oldfield for $3,250.

Still, for Rushton Park – whose other breeding highlights include stakes winners Lord Von Costa (Von Costa De Hero) and Mystery Love (Eurozone), plus Maserartie Bay (Artie Schiller) and Quang Tri (Shalaa) – and so too for Kitchwin Hills, the often unnerving waiting could be about to meet a substantial reward if Boogie Dancer keeps twirling as she has been.