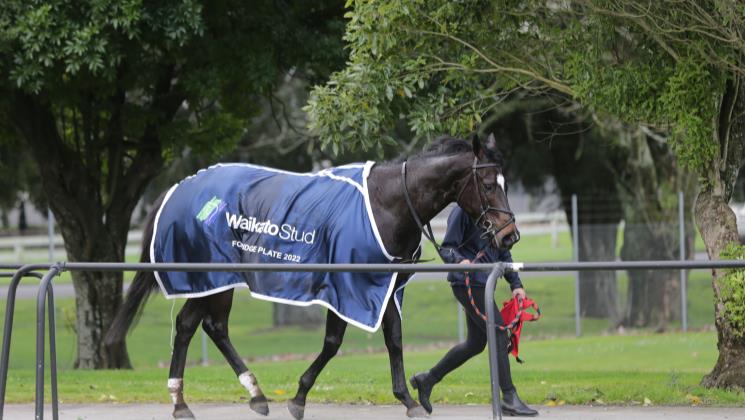 Te Akau Racing’s latest star, Imperatriz (I Am Invincible), has some way yet to go to match the exploits of former stablemates Melody Belle (Commands) and Avantage (Fastnet Rock), but on Saturday’s electric performance, when bolting away with the Foxbridge Plate (Gr 2, 1200m), the four-year-old clearly has all the makings of a champion.

Her trainer, Mark Walker, and rider, Opie Bosson, were glowing in their praise for the mare whose record stands at nine wins, including two at the elite Group 1 level, two Group 2s and two Group 3s from 12 starts.

She has put her foot on the till in every start, her three defeats resulting in a Group 3 second, a Group 3 third and a Group 1 fourth, in last November’s New Zealand One Thousand Guineas (Gr 1, 1600m). This is one serious racemare.

Outside of her inner circle, perhaps the best comment regarding the mare’s talent is from trainer Allan Sharrock, who lined up three opponents against her.

The daughter of I Am Invincible (Invincible Spirit) made a huge statement when taking out the New Zealand Thoroughbred Breeders’ Stakes (Gr 1, 1600m) last April. As a three-year-old filly, her win against the older mares, including Coventina Bay (Shamexpress) and Two Illicit (Jimmy Choux), both Group 1 winners, was equally stunning.

Similar to Saturday’s Foxbridge Plate, Imperatriz drew right away that day and was five lengths clear in her seasonal wrap-up.

Her return to racing, at Ruakaka, in the open sprint, three weeks ago, was designed to avoid a first-up slog through a heavy track. Trainer Walker was wary of such a task but couldn’t have known that Te Rapa’s surface was to be loosened somewhat by 60 millimetres of rain throughout the week.

“When the track turned up the way it did, you do second guess yourself, but I think we got it right,” said Walker.

Rider Bosson’s comments were telling: “It felt like we were on a good track with how quick she went and I can’t wait to get on a better track and to hold her up for longer as she could be even more explosive. After today, I think she is right on for Hastings.”

To match Avantage, Imperatriz will need to add at least another seven Group 1s and five beyond that if she is to be compared with Melody Belle, but within the next month she may answer some of those questions.

Next up is the Tarzino Trophy (Gr 1, 1400m), scheduled for Saturday, September 10, the first leg of the Hastings Triple Crown. If Bosson’s comments are any guide, the mare appears to have this race at her mercy.

As a dual Group 1 winner over 1600 metres, the second leg, the Arrowfield Plate (Gr 1, 1600m) (former Windsor Park Plate) is also well within her scope.

Leg three, the Livamol Classic (Gr 1, 2040m), is another story. It will not surprise if she bypasses the 2040 metres and is, instead, making bookings for Melbourne.

Melbourne Group racing, a cauldron in the spring, is every owner’s dream and Imperatriz’s reputation will be judged on her ability to compete against the best. That is, ultimately, what racing is all about and her fresh-up win at Ruakaka, in the Kerikeri Cup (1200m), gave us a small clue about her chances in Melbourne.

Worth recalling is the effort by Dragon Leap (Pierro), who stormed home late to run Imperatriz to a short neck, running his last 600 metres in 32.76 seconds. His trainers, Lance O’Sullivan and Andrew Scott, were sufficiently impressed with his run to steer clear of the heavy Te Rapa track and take on the first Melbourne Group 1 of the season, the rich Memsie Stakes (Gr 1, 1400m).

The gamble almost paid off as the six-year-old was seen finishing nicely from back of midfield for a solid fourth. A number of big names and more favoured runners were behind him.

Further proof that Imperatriz is up to the needed standard might be gained from the big win by I Wish I Win (Savabeel) in race four at Caulfield. He was a length and a quarter behind the filly in the Levin Classic (Gr 1, 1600m) last March, yet dealt with a decent Melbourne field by a widening four lengths.

Also worth keeping in mind is that Imperatriz was nowhere near wound up for her seasonal debut. A Melbourne Group 1 would go some way to ticking off the comparison with Melody Belle. Nevertheless, she is very exciting and is exactly the sort of racehorse the racing industry savours.

Jamie Richards, former trainer of I Wish I Win, had the following to say after the gelding won his two-year-old maiden, at Awapuni back in March of last year: “He’s a lovely type of horse, great colour, and he’s got a wonderful attitude. Unfortunately, he was unable to be sold by Waikato Stud, because he’s quite rotated outwards in one of his front legs but it doesn’t appear to affect him when he’s galloping.”

Clearly, his turned out foot is no impediment, but says a lot about the integrity of his breeders, Waikato Stud, who were not prepared to take him to Karaka for sale.

Buyers can be savage regarding such faults, so for I Wish I Win to show his ability despite such a deformity might steer buyers to be more forgiving.

After his debut win, I Wish I Win returned to Awapuni and stepped up to Group 1 class, running a game second to On The Bubbles (Brazen Beau) in the Manawatu Sires’ Produce Stakes (Gr 1, 1400m) before being put aside.

At three, two seconds and a third, all in stakes races, preceded a disappointing eighth in the New Zealand Two Thousand Guineas (Gr 1, 1600m) won by stablemate Noverre (Savabeel).

After a short let-up he reappeared at Trentham over 1200 metres to win really well, running the last 600 metres in a cracking 31.62 seconds. His two subsequent runs were again in good company, finishing second to old foe On The Bubbles at Listed level at Ellerslie, closing out his New Zealand career with a third behind Imperatriz in the Levin Classic, beaten by a length and a quarter.

Now in the care of Peter Moody, I Wish I Win could be in for a big spring, especially if his Saturday run is a guide. Trapped wide for most of the journey, when he was let go he devoured the leaders and was far too strong to the line.

The Toorak Handicap (Gr 1, 1600m), in October, also at Caulfield, is his target. Moody’s assistant, Katherine Coleman stated: “He’s a horse that’s come to us with great form in New Zealand. He’s been very well educated over there, and we’re lucky enough to take the reins now.”

Coleman continued: “He’s trialled up very well. His work at home’s been fantastic. So it’s lovely to see him come here and give that performance today. But I’d say we sort of expected that of him. He’ll head towards the Toorak Handicap now, so we’ll just pick our path on how we get there.”

On blood alone, I Wish I Win might be destined for Group 1 honours as the combination of Savabeel (Zabeel) with his branch of his immediate family has already been highly successful.

His granddam, Starcent (Centaine), is a sister to Night Star, the granddam of Group 1 winners, brother and sister Embellish and Diademe, both by Savabeel.

On a day when the Kiwi-breds were not able to claim a single stakes win, of the ten black-type races run throughout Australasia, it was the return by I’m Thunderstruck (Shocking) which was the highlight, and what a slashing run it was.

Handier than usual, I’m Thunderstruck emerged from the pack and was the only real chance of overhauling pacemaker Snapdancer (Choisir), whose winning break at the 200 metres was the difference. I’m Thunderstruck was very strong over the final 50 metres and was dramatically eating into the lead.

The son of Shocking (Street Cry) was in fabulous form this time last year and, judging from this first-up effort, is in for another series of big pay days. He is a most determined performer and when he sees daylight, knows only to try his hardest.

Kudos to ANZ Bloodstock News’ Ken Boman for uncovering Waterford (Awtaad) as ANZ’s Maiden of the Week back in March, after he strolled away with a Warwick Farm maiden on his Australian debut.

Kiwi Chronicles referenced this family in the May 24 edition of ANZ Bloodstock News, when Alenquer (Adlerflug) bagged the Tattersall’s Gold Cup (Gr 1, 1m 2f), due to his being descended from a mare named after the settlement named Waitotara, situated in the South Taranaki region of the New Zealand’s North Island. Waitotara is the location of Grangewilliam Stud, home of Verry Elleegant’s sire, Zed (Zabeel).

An import from the UK, Waterford showed some greenness when winning easily at Warwick Farm but was far more professional in Saturday’s Benchmark 78 event over 1500 metres, remaining undefeated in Australia from his only two starts there.

His sustained finish suggests that he will appreciate more ground and it will be no surprise to see him win again soon, and in good company.

His only start at home was to run third in a Newbury maiden, the winner, Bayside Boy, taking out the Champagne Stakes (Gr 2, 7f) two starts later.

His family, too, suggests that a longer trip will be right up his alley. His dam, Wake Up (Soldier Of Fortune) won in Germany over 2300 metres and she is a half-sister to Wild King (Samum) and Path Wind (Anabaa) both good stayers.

Third dam, Wild Romance (Alkalde), was the champion German two-year-old filly of 1993 and has produced three stakes winners including the Champion Stayer and Deutsches St Leger (Gr 2, 2800m) winner Win For Us (Surumu).

During the sale itself, the writer, while distributing hard copies of ANZ Bloodstock News’ sales editions, was asked by Inglewood’s Gus Wigley exactly what “smokey” meant.

I explained that it was an Americanism, the English equivalent being: Where there is smoke, there is fire.

Maintaining this theme, Kiwi Chronicles repeated the description when the July 26 column discussed up and coming sires whose first crop were about to turn three.

Enter Miss Take (War Decree), who gave the South Island a shake with her phenomenal performance at Riccarton on Thursday, shooting straight to the front and relentlessly driving further and further in front the entire 1200 metres, running out the distance in a slick 1:09.55. The flying filly was nearly ten lengths clear, signalling a bright future.

Her connections are aware of her ability. She performed in exactly the same fashion in her two trials leading up to her big raceday debut. At Ashburton, nine days prior, she gapped them by eight lengths and was one of three War Decree trial winners for the day.

Last month, on the Riccarton synthetic track, the site of her maiden victory, she slipped away in the straight to be five lengths clear. Her next assignment is likely the September 17 Canterbury Belle Stakes (Listed, 1200m) on the Riccarton turf, with the New Zealand 1,000 Guineas (Gr 1, 1600m) a possible target.

If you get a busy signal when attempting to call Wigley for a booking, you will understand why. Stay tuned. She is pretty exciting.