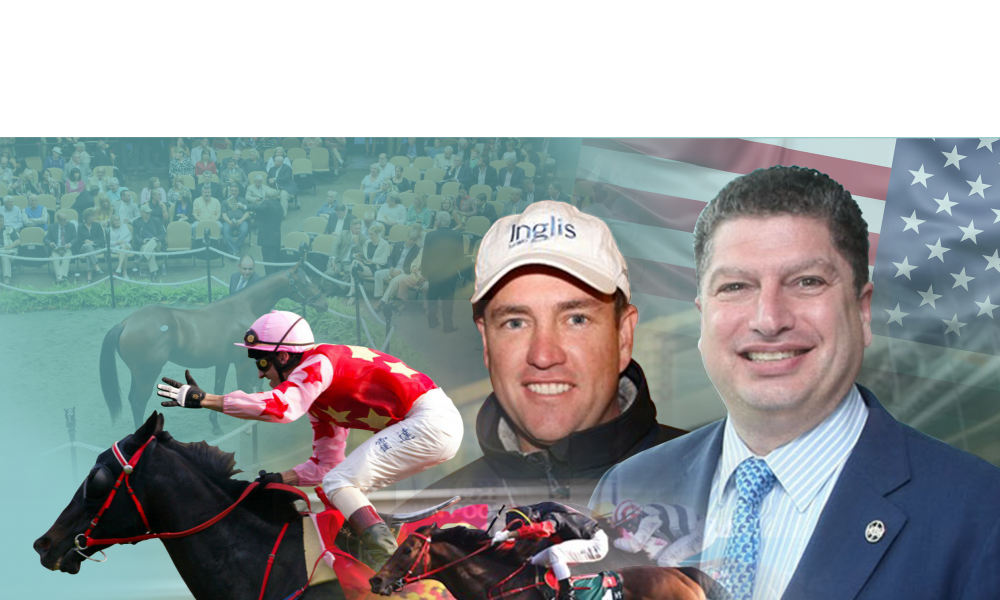 The Hong Kong Jockey Club’s (HKJC) purchase of a Medaglia D’Oro (El Prado) colt at Keeneland’s September Yearling Sale late last week ended a nine-year absence from the North American market and signalled a tweak to its buying strategy that has implications beyond the immediate concern of its quirky Hong Kong International Sale (HKIS).

The need to connect to previously untapped or abandoned markets in the face of booming bloodstock prices in Australia and Europe – which are frustrating Hong Kong buyers – as well as the importance of global commingling to HKJC’s turnover and the advancement of international harmonisation of racing rules, all find embodiment in the acquisition of Lot 1087.

“It has been a long time. Keeneland makes sense, it’s a great sale and they produce a lot of great horses,” the HKJC’s director of racing, business and operations Bill Nader told Asia Bloodstock News.

“We haven’t done any simulcast races in America since 2014 so that’s two ways to recognise the positive direction that the industry has been going in America regarding medication policy and no medication on race day.”

The HKJC’s return to North American buying came in the fourth of Keeneland’s 12 sessions when Craig Rounsefell of Boomer Bloodstock, the HKJC’s Australia-based agent, landed a bid of US$200,000 for a youngster, bred in Florida by Hardacre Farm, with a page boasting top class connections to the Asian hub.

His sire is also responsible for Hong Kong’s current champion Golden Sixty (Medaglia D’Oro), while his dam, Habiboo (Unbridled’s Song), is a half-sister to Street Boss (Street Cry), the sire of past Hong Kong champion Rapper Dragon. Golden Sixty and Rapper Dragon are the only horses to have swept all three races in the Hong Kong Classic Series, which includes the highly-prized Hong Kong Derby (Listed, 2000m).

“We’ve definitely made a concerted effort to try and get the Hong Kong Jockey Club to come back and purchase horses for their international sale but also to show that America is another option,” said Chip McGaughey, sales associate at Keeneland, whose remit includes Asian market development.

“We’re hoping to show the faith that the Hong Kong Jockey Club has in our horses and our market, and show their members that it’s another viable option to source their racing stock, whether it be at auction or privately if that’s their choice.”

Two past Hong Kong Horses of the Year were Keeneland graduates. John Moore, through John Foote as agent, purchased subsequent champion miler Electronic Unicorn (Housebuster) for US$200,000 at Keeneland in September 1997; six years later, Cash Asmussen, as agent for the HKJC, bought the triple Hong Kong Mile (Gr 1, 1600m) winner Good Ba Ba (Lear Fan) – for resale at the HKIS to the exclusive clientele of HKJC members – at a cost of only US$85,000.

Between 1996 and 2012 a total of 52 horses sourced at auction in the US went through the HKIS ring to emerge as International Sale graduates (ISG) and 31 of those won at least one race. But the success of US-bred horses entering the circuit via the HKIS waned in the half dozen years to 2012, as did their popularity with Hong Kong buyers.

A further seven never raced, while 11 did not make it to the HKIS but were moved on and raced in the US, with seven of those being the winners of 17 races between them, for a winners to runners rate of 63 per cent.

In fact, none of the final batch of five horses bought at Keeneland in September 2012 made it to Hong Kong. One was unnamed and unraced, while the remaining four all won in the US including the ten-time winner Bleu Brave (Northern Afleet).

By the time those horses hit the tracks of North America, the HKJC hierarchy had already pulled the plug on its US buying. None of its five 2009 purchases had made it to the HKIS either, and it was October 2013 before one of its three 2010 Keeneland buys to race in Hong Kong made it to the winner’s arch. Trends hold sway in Hong Kong where owners are quick to piggyback the success and dump the failures. By the time the HKJC withdrew from the North American market, its members were ahead of it.

The HKJC’s return is in part hooked into the political stance of its CEO Winfried Engelbrecht-Bresges and the International Federation of Horseracing Authorities’ (IFHA) moves to bring about international accord when it comes to the sport’s rules. Engelbrecht-Bresges, newly appointed as IFHA President, has long banged the rules harmonisation drum, and with the HKJC being the kingpins of commingled international pools, he and the Club are keen to see a level field in terms of racing rules and, significantly in the case of the USA, race day medication. Removing the variables and bringing uniformity, the argument goes, would breed greater punter confidence across borders, thus increasing engagement and the all-important turnover figure.

The HKJC has stringent rules regarding race day medications and the use of anabolic steroids. It is no coincidence that its return to buying horses in the US for the first time since September 2012 came a year and a half after Keeneland and Fasig-Tipton both announced restrictions on the use of non-steroidal anti-inflammatory drugs (NSAIDs), corticosteroids and bronchodilators for any stock sold at their sales. That move followed an earlier ban on the use of anabolic steroids in horses offered at auction.

Those moves by the sale companies tie in with changes to race day medication rules in the US, with the passage through Congress last December of the Horseracing Integrity and Safety Act, which legislated for Lasix-free racing in the US by July 1, 2022.

“It’s being phased in but the Breeders’ Cup races will be run without medication, the triple crown was without medication, and we’re recognising that they’re at least moving in the right direction and there’s more uniformity and harmonisation with the rest of the world. I know it’s not easy to get those things done but a lot of people have been working hard to make that happen,” Nader said.

The HKJC’s overall racing turnover for last season came in at HK$136 billion, with HK$7 billion of that coming from races simulcast into Hong Kong from overseas. This season, the Club has increased its number of simulcast races available to its local players and the US holds significant potential.

With the familiarity of more Japanese involvement at this year’s Breeders’ Cup, there may be more appeal for Hong Kong’s racing fans who historically have been largely apathetic to what happens away from Sha Tin and Happy Valley.

“The Breeders’ Cup Mile and Breeders’ Cup Turf often foreshadow what is to come at the Hong Kong International Races, so it’s good for us to watch and wager on those races and hopefully some of those horses, particularly the Europeans will come on to Hong Kong,” Nader continued.

“I think Loves Only You (for Japan) will be there at the Breeders’ Cup, having won the QEII here. For the Hong Kong audience and the Hong Kong racing fans, the world has gotten a lot smaller by being able to see more of these races from overseas, so we want to build on that momentum.”

Keeneland is eager to see momentum build too in the form of Hong Kong buyers following the HKJC’s lead and joining their Japanese counterparts in buying American, especially with the hope that governments will have eased right back on their Covid restrictions 12 months from now.

“Now that we’re a full year into (Covid), we were happy to be able to get about four times as many Japanese buyers back over and hopefully, if they weren’t able to come over, that they’d have more agents in place to be able to help them source their racing stock,” McGaughey said.

“American-breds have been winning a ton of races in Singapore this year too, which came out of nowhere. We’ve had more interest in terms of Singaporean clients buying horses with Bye Bye Hong Kong winning the Kranji Mile. Even for Hong Kong, there are similar pedigrees because we have so many stallions that shuttle down to Australia, so hopefully there’s more familiarity with some of the (American) sire lines.”

HKJC’s return to Keeneland was hardly an opening of the floodgates but if over the next three to four years Rounsefell and his paymasters are able to prove to Hong Kong buyers via results on the track, that American horses can be bought at value and can once again succeed in Sha Tin’s tough environs, then perhaps Good Ba Ba won’t be the last Horse of the Year to have both ‘ISG’ and ‘USA’ after its name.