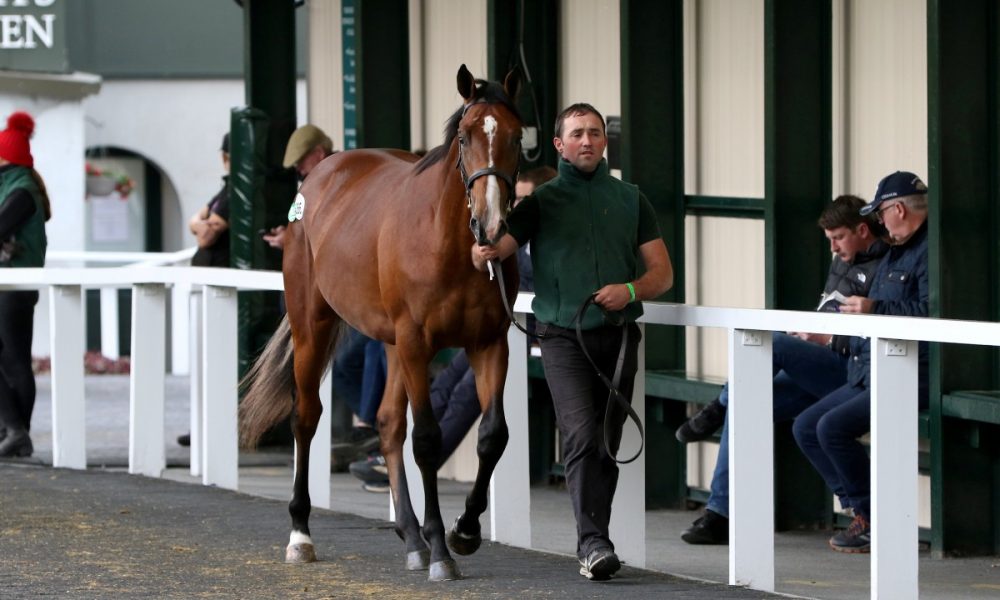 If Tuesday’s first session of the Goffs Orby Sale was a welcome return to form, then Wednesday’s second session provided confirmation that Ireland’s national yearling sale is right back where it belongs.

As a frenetic day of trading drew to a close, all the major indications pointed to a successful rebound to 2019, driven by a deep pool of international buyers who flocked to Goffs in their droves.

However, the most expensive colt of the sale harked back to bygone days as the names of Magnier and Sangster were once again linked with the most sought after blue-blooded stallion prospect on offer as MV Magnier bought a Camelot (Montjeu) colt bred by Ben and Lucy Sangster.

Offered by The Castlebridge Consignment, he brought a winning bid of €1.2 million (approx. AU$1.92 million) from Magnier, in his now customary position in the back ring.

He resembles his great-grandsire Sadler’s Wells (Northern Dancer) in looks but it was recent history which proved most pertinent as he is a full-brother to none other than Luxembourg, who pushed his way to the head of ante-post Derby (Gr 1, 1m 4f) markets with ease when winning the Beresford Stakes (Gr 2, 1m) at the Curragh last Saturday for the Ballydoyle team.

“I am delighted for Ben and Lucy Sangster,” remarked the successful purchaser. “They and their family have been great supporters of ours for a long, long time and it is a great result for them.

“It looks like Luxembourg could be something out of the ordinary. I was speaking to Seamus Heffernan and he said he couldn’t believe how good he was last weekend. Camelot is having a good year again, this colt is a very nice horse and let’s hope he is a good one.”

Lot 366 was one of seven purchases by MV Magnier by that point of the event, including the €1.5m sales-topping Galileo (Sadler’s Wells) filly, as well as colts by Wootton Bassett (Iffraaj), Churchill (Galileo), Saxon Warrior (Deep Impact), No Nay Never (Deep Impact) and Siyouni (Pivotal), the last-named in partnership with Phil Antonacci.

A long list of American names were found in the buyers’ column over the two days and Kenny McPeek made his first visit to Goffs a memorable one, signing for a quartet of yearlings to make the journey back across the Atlantic Ocean.

As well as Tuesday’s Galileo colt, he also signed for fillies by Camelot and Expert Eye (Acclamation) on Wednesday and the sale’s most expensive offering by Frankel (Frankel).

Lot 377 was bred by Eddie and Eimear Irwin at their Marlhill House Stud, outside Cashel, and is a full-brother to Old Glory, who brought €1.6m at the 2017 Orby Sale. Trained by Aidan O’Brien, he was Group 3- and Listed-placed at two and Listed-placed over a mile at three.

He is also a three-parts brother to Giuseppe Piazzi (Galileo), Scandinavia’s champion older horse in 2017, and is a half-brother to Assign (Camelot), a Group 2 winner in Australia.

Dam Belesta is a winning Xaar (Zafonic) half-sister to In Clover (Inchinor), the Group 3-winning dam of three Group 1 winners.

The striking chestnut, who has already been nicknamed Freckles by McPeek, will race for a partnership that at present includes Swiss Skydiver’s owner Peter Callahan and Paul Fireman, whose Fern Circle Stables own this season’s Lexington Stakes (Gr 3, 8.5f) winner King Fury (Curlin).

It is that son of Curlin who McPeek had in mind when thinking of the €900,000 colt’s future.

“They are wonderful clients [Fireman and Callahan] and always have been,” McPeek said.

“These are the kind of horses you can play at an extremely high level and if he does that he is a stallion prospect. We are working through King Fury and this is that kind of horse too. I am very fortunate, I reached out to both of them this morning and they were ready to play.”

It is the first time that McPeek will condition a son of Frankel, and he is relishing the prospect of training both him and the Galileo colt, adding: “We don’t get that many opportunities for Frankels and Galileos over in the US so if you can win a Graded Stakes or Group race with these well-related horses, we all know where they end up, and that residual value is there if they are that talented. Fingers crossed all goes right for them.”

Frankel was also responsible for the day’s most expensive filly, with his Orby average weighing in at €550,000. Lot 254 is a stunning filly who was bred by John Hayes out of the Indian Ridge (Ahonoora) mare Sophie Germain, making her a half-sister to the Group 2 winner Creggs Pipes (Rip Van Winkle).

Creggs Pipes was bred and raced by Hayes and his wife Una and her Sea The Stars (Cape Cross) yearling filly later sold for €180,000 to the Tsui family.

The Frankel filly was consigned by Pa Doyle’s Galbertstown Stud, and the consignor reflected on his best day at a yearling sale.

“I consign all their yearlings for sale, they are wonderful owners, they have gone into it big and they been well-rewarded,” said Doyle, who believes the filly could be a serious contender for Classic honours in 2023.

“Without doubt it is the best sale we’ve had, and she is the best filly we have ever produced for the sale. She came up here last Friday and from day one she has never put a foot wrong.

“She went down very well. She is a very elegant filly and one that I think we are going to hear a lot more from. She is a proper queen and she could be one to come around Tattenham Corner.”

If she does win the Oaks it will be in the colours of Al Shira’aa Farm, whose representative, Kieran Lalor, was effusive in his praise of the bay daughter of Frankel.

“She is a fabulous filly and was my pick of the whole sale physically,” he said. “Frankel is the best sire in the world right now and she’s a big filly, a great mover with lovely bone.

“She has everything you want in a racehorse and we are really excited about her. The lads did a great job prepping her for the sale.”

Al Shira’aa recently acquired Meadow Court Stud in Kildare and the team is busy searching for fillies with the right attributes to one day retire to the farm, after earning themselves some success on the track.

Two in that mould were the day-one purchases of the half-sisters to this year’s 1,000 and 2,000 Guineas (Gr 1, 1m) winners Mother Earth (Zoffany) and Poetic Flare (Dawn Approach) for a total of €550,000, and Lalor elaborated on what it was about them that made them the perfect fit for their enterprise.

“Obviously the two fillies yesterday are by unproven stallions but, for me, anything by Scat Daddy [Sioux Nation] is worth taking a shot on and the one thing about those two horses – Poetic Flare and Mother Earth – they have run in six or seven Group 1 races and are always there on the board,” he said.

“There are other horses in the families that have proven themselves as tough and consistent, and they are tough, hard and sound families. Obviously there is a risk with the sires, but we think they are worth it.”

American buyers were active at a level not witnessed at this sale previously, though Justin Casse has been a familiar presence at Goffs Orby for a number of years and he signed for the sale’s most expensive yearling from the second crop of Churchill.

Lot 364 was consigned by Castlebridge and is a half-brother to Debutante Stakes (Gr 2, winner and Group 1-placed Agartha (Caravaggio), who is a daughter of Churchill’s fellow Coolmore first-season sire Caravaggio (Scat Daddy).

Casse, who signed on the dotted line for €360,000, said: “It is a beautiful pedigree, top to bottom, with updates and good horses throughout the pedigree. I am excited about Churchill and what I have heard is coming.

“Obviously his sister is exciting as well. He will stay here but we still need to have discussions with the owner about training plans.”

The 2020 sale had been held in Doncaster, due to Covid-19 difficulties, and conducted in sterling, and for ease of comparison Goffs converted last year’s figures into euros.

Henry Beeby, group chief executive of Goffs, has been admirably frank in his assessment of what went wrong last year and the company has worked hard to regain the footing lost by the Covid-induced problems of 2020, with the Goffs Million proving enticing to a large cross-section of the buying bench.

It is good to be back, very good indeed,” he said. “The Irish National Yearling Sale obviously belongs in Ireland at Kildare Paddocks and it is simply wonderful to have returned with a sale of such depth and consistency over the two days after last year’s hiatus.

“Indeed, Orby has reclaimed its rightful place at the top table of yearling sales with seven-figure top prices, a six-figure average and a staggering 91 per cent clearance rate that points to a vibrant two days of bidding for the superb catalogue that was assembled.”

He added: “There is still so much more to do to make Orby the clear first choice for more of the best yearlings in Ireland and we will not rest in our endeavours as we strive to improve and evolve.

“However, I would venture to say that Orby ’21 has made the point once again that we will deliver when we have the horses; in fact, not just deliver but exceed expectations, and Irish breeders need look no further for a global market for the best.”