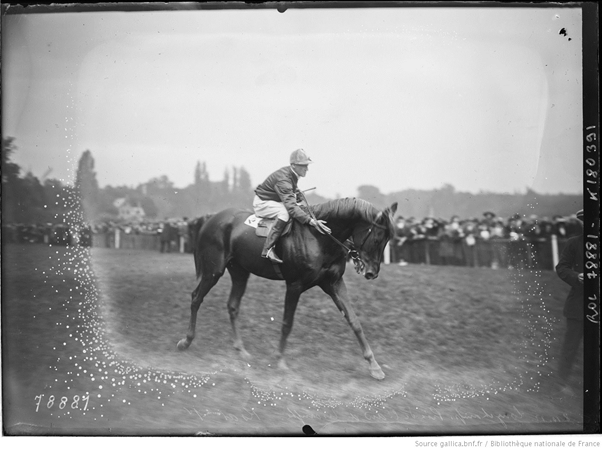 – The third jockey to join our list of Incomparables –

Francis (Frank) Joseph Patrick Bullock (1885 – 1946) was the most successful jockey at home and abroad of the remarkable Australians who ventured overseas in the first decade of the twentieth century.

Bullock was inducted into the Australian Racing Hall of Fame in 2006 and is one of only 14 jockeys with a place in Sport Australia’s broader and outstanding Hall of Fame.

Sport Australia describes Bullock as “Australia’s first truly international jockey” which is a more than reasonable claim given his success in England, France and Germany, but I’d argue that tag should be shared with fellow pre-World War I travellers Frank Wootton and Bernard “Brownie” Carslake.

The case for Bullock heading the pioneers would be pinned on his greater success in Australia during and after the time of his travels, plus his win in the inaugural Prix de l’Arc de Triomphe in 1920 – a race he claimed again two years later but one which eluded Carslake and Wootton.

He won his first race in England in 1903, three years before the arrival of those fellow Australians, and won the Melbourne Cup in 1905 on Blue Spec before returning to England where his many credits included riding nine winners in four days at Royal Ascot and finishing second to Steve Donoghue in the jockeys championship in 1921 (and perhaps also in other years but the records are scant).

Bullock said Donoghue was the “best jockey he saw”.

He also won two Caulfield Cups at “home” and his major race wins aboard also included the Ascot Gold Cup, English 1,000 Guineas, the Oaks, Sussex Stakes, Coronation Cup, the Cesarewitch and the St James’s Palace Stakes; the Eclipse Stakes and Champion Stakes twice plus the Dewhurst and Middle Park Stakes on three occasions.

He was three times second in the Derby.

He was champion jockey in Germany five years straight from 1908 – that success coinciding with Frank Wootton’s four straight championships in Britain from 1909 to 1912 – and is reported to have ridden more than 500 winners in Germany and Austria.

A curiosity of that time is that Bullock had ridden, before World War I, a horse named Cyklon for the German emperor, Kaiser Wilhelm II. The Kaiser sent Cyklon to England to race, but with the outbreak of war, the British government took possession of the horse. After the war, Frank arranged for Cyklon to be sent to Australia where he sired the 1927 Melbourne Cup winner, Trivalve.

Trivalve won the Cup in the hands of Bullock’s brother-in-law Bobbie Lewis who would later teach, to ride, another of our “Incomparables” Ron Hutchinson. It was Lewis’s fourth Cup win. Bullock was married to Lewis’s sister Martha.

Bullock was rated 14th best in the Racing Post’s list of the top 50 flat jockeys of the 20th century. Only Frank Wootton (9th), Scobie Breasley (10th) and Bernard “Brownie” Carslake (12th) were – among his countrymen – ranked above him.

John Richardson, reader and former journalist (among myriad other hats worn in the racing and breeding industry), is able to provide some detail of Bullock’s career through general recollection and his own “scribblings” published in The Informant in New Zealand.

“Apart from horses and horses’ pedigrees, my other great interest is family history,” Richardson emailed me last week, “and you can imagine the thrill I got when a few years back when I discovered that Frank Bullock was a distant relative of my mother who came, I thought, from a non-horsey background.

“His mother Eleanor Jane Wrathall and my mum were first cousins twice removed. Frank Bullock’s grandfather Francis Wrathall and mum’s great grandmother Mary Ann were brother and sister in a family of 14 kids”.

Richardson, in The Informant, wrote: “Francis Patrick Bullock was born in 1884 at Heathcote, Victoria.”

His father James Bullock is listed as hailing from Wild Duck (Creek) near Heathcote. This strikes a chord with me as you won’t find a more sumptuous red wine than the Wild Duck Creek Estate Springflat Shiraz (now produced in that hamlet).

Jockeypedia says Bullock came to England in 1903 after “having enjoyed great success in both Australia and Europe”. If that was so, then that success (in Europe) and travel came before his 18th birthday which seems remarkable for such a young man and at a time when the journey by ship took at least 45 days.

The motivation might simply have been to make money. Hard to believe now but then, and in the years immediately after World War II, it was more lucrative riding in England and Europe than in Australia.

We do know, as fact, that Bullock went to Germany before “returning to England” shortly before the outbreak of war.

The Kalgoorlie Sun, in 1910, reported that Bullock “had long been riding in big money races, and as he has been careful, he is now a man of means. He is the possessor of some fine property in Melbourne while his bank balance is a handy one.”

Bullock’s exploits were of interest in that part of Western Australia as his father James (Jim), noted as a well-known horseman, was described as either manager or proprietor of the Exchange Hotel, Coolgardie.

The Sun reported that Bullock was riding for the Royal Gratitz Stud at Hoppegarten on an annual retainer of £1250. It estimated his base annual income at about £2,000 – including other smaller retainers, expenses and private trial riding fees – exclusive of winning percentages. That sum, £2,000, was about eight times more than a manager would earn in Australia in 1910.

As to his later income in England, Bullock said: “Once a jockey is established, he makes more in England than he could in Australia because there are more rich owners.”

Renowned Australian racing writer Bert Wolfe (Cardigan) recalled Bullock’s liking for German racing when he wrote, in 1929, that it was the money which would lure James Munro to Germany the following year – to ride for Baron Oppenheim, as had Bullock.

“Bullock once told me he much preferred riding in Germany than France,” Wolfe wrote. “For one thing, he said the German jockeys are not so good, and as a result, are more easily beaten than the French….and if you happen to beat a short-priced favourite at one of the leading French tracks, the crowd say and throw things at you but in Germany the racing public are more phlegmatic. They yell ‘Hoch’ a couple of times, and then go and drown their sorrows in a stein of beer.”

It’s not clear, after hours of searching newspaper archives, whether Bullock had to leave Germany in haste. We know his career flourished back in England and, despite his liking for racing in Germany, he was happy to regularly plunder good class races in France – often travelling by plane with his friend and rival Donoghue.

Donoghue wrote a newspaper column, at the time, and once mused that Bullock had thought he was deaf after returning from France after all-night partying had followed a major win. All was right after Donohue reminded Bullock that his ears were stuffed with cotton wool which they’d inserted on the advice of the pilot before the crossing.

Bullock retired from race riding in 1925, candidly admitting he’d lost his nerve. “At 40 years of age when I should be in my prime, I feel old and shaken. I’ve had five bad falls within a few years and am losing my nerve,” he told the English press.

Richardson notes that Bullock took up training on retirement from the saddle and was based in France from 1929 to 1935 and later, in 1940, in India for the Governor of Bombay. It was reported that he trained briefly at Caulfield after retiring before returning to England and setting up in Yorkshire in 1928.

Bullock died on August 26, 1946 at Banstead, Surrey at the home of his son-in-law, the jockey Walter Sibbrett who was one of the least-heralded “Incomparables” having won the 1935 Prix de l’Arc de Triomphe on Samos.