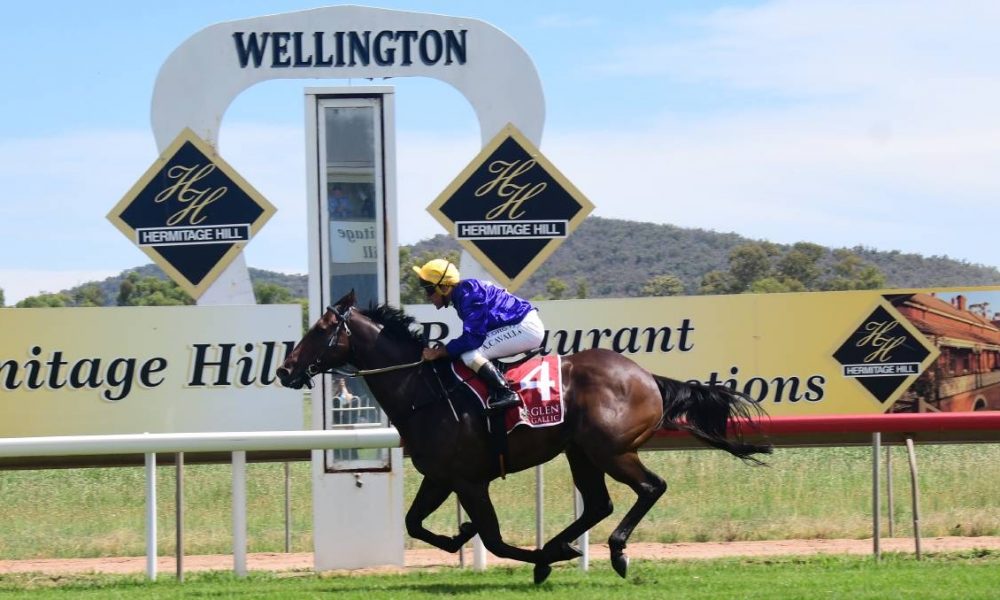 A brown gelding by the name of Byzantium (All Too Hard) is doing what no other thoroughbred is.

Having won his past four starts around western NSW, he’s in career-best form but what stands him apart from any of his rivals is the fact that away from the rigours of racing he’s taking all before him on the show circuit.

Quite literally, he’s winning races one day for his trainer and part-owner Bob Howe, and collecting broad sashes the next for his 18-year-old daughter Brooke, who rides him at all of the events.

“He’s got two lives, he is amazing. He’s the only horse in the world that I know of who does both like he does,” Brooke says.

Bob purchased Byzantium as a tried horse through the 2018 Inglis March Monthly Online for $20,000. Originally, he was sold through the Vinery Stud draft at the 2016 Magic Millions Gold Coast Yearling Sale for $440,000.

After numerous trials and six lacklustre starts with Hawkes Racing, he didn’t make the grade there and was moved on.

“I got him second hand and since Brooke has been doing this stuff with him he races better and he sticks his neck out and he tries,” Bob says.

Bob paddock trains his horses out of a small country town called Rylstone and has a much different training routine to a big city team like Hawkes Racing.

At 63 he’s semi-retired from working in the mines and tinkers with a team of six that he owns in partnership, including Byzantium.

“We rarely gallop him. We have a paddock with a good hill and that’s used for fast days. We work him up the hill very occasionally and (jockey) Tony Cavallo will come in and give him a gallop when he really needs one,” Bob continues.

The real key, it seems, to Byzantium realising his potential on the track has been the regular equestrian work that Brooke does with him.

“He’s not the greatest racehorse but he’s found a bit of a purple patch lately so I don’t think it hurts him what he’s doing. He goes to dressage and pony club and shows – the mix-up doesn’t hurt him,” Bob says.

“He’s pretty versatile, I think you would call him. It has a lot to do with why he’s so successful. He looks great and he’s going great and that’s all we can ever ask.”

The change in routine has undoubtedly been the saviour of Byzantium’s racing career. In 2020, and having posted just two wins on the track, he was headed for retirement, but he has since taken his (racing) record to nine wins from 53 starts and more than $110,000 in prize-money.

Now the father and daughter team are still sharing him and together they are getting the best out of their pride and joy in every pursuit he’s involved in.

“He’s turned into a trier. His regular race rider (Tony Cavallo) said to me: ‘I have not hit this horse with a whip at his last four starts. You are better off not touching him and leaving him be. He’s just press button and does not do anything wrong.'”

After his recent winning streak, which culminated in a Benchmark 58 success over 1000 metres last Friday at Parkes, Byzantium is being given a well-deserved break from racing.

And much to the delight of his biggest fan Brooke, he’s now going to be busy on the local agricultural show circuit over the next six weeks.

“We will get him ready for our show run now and do events like Mudgee, Rylstone, Dunedoo, Gulgong, and Dubbo or wherever we can find shows that suit us,” she says.

Upon hearing of those ambitious plans to travel all over the countryside competing at hack shows, Bob pipes up in the background and says with a little chuckle: “We won’t do every one of them, we will only do what we can get to.”

Wherever they go, Byzantium, or ‘Baz’ as he’s known around the farm at home, will be a great flag bearer for the many virtues of the thoroughbred breed.

“I have always wanted to promote them. I just love them,” Bob says.

“A lot of people give them a bad name and it irks me because they are the nicest horses I have ever had anything to do with. I know they don’t all make it (off the track) but the right ones do.”

Bob is a huge advocate for the ever-increasing number of off-the-track initiatives, which in this heavily welfare–focussed era of the sport are vital to public perception of the industry and its social licence.

“I’m so glad that the thoroughbred industry has decided to do stuff like this to give them competitions and things to do and people will find some really good horses along the way that will surprise them with what they can do,” he continues.

“That’s what it’s all about. What is better for an owner of a thoroughbred horse whether it was successful or not to find it jumping or hacking or doing dressage? It’s much better than saying he’s out in the paddock or he went to the dogger.”