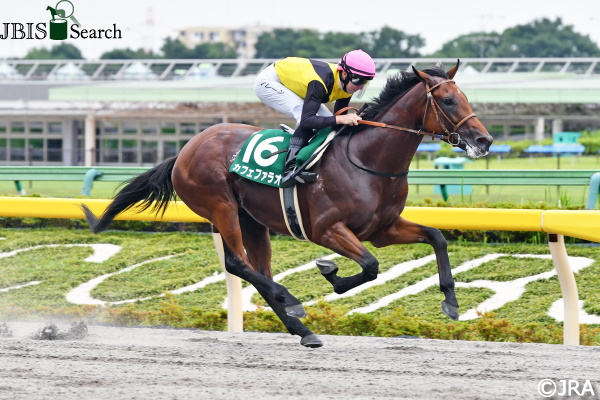 Absent of the fans and cheers, the first Grade 1 event of the season was sent on its way on the backstretch with Air Almas (Majestic Warrior), Helios (Orfevre) and Wide Pharaoh (Henny Hughes) fighting for the lead.

As Helios slipped back in the early stages, Cafe Pharoah (4 c ex Mary’s Follies by More Than Ready), breaking from stall three under Christophe Lemaire, stalked the two front runners while saving ground before smoothly angling out right beside them to enter the lane in third.

From there on, the American Pharoah (Pioneerof The Nile) colt unleashed a powerful drive, stealing the lead by the furlong marker and held off the fast-closing Air Spinel (King Kamehameha) by a three-quarter length margin.

“His condition was super, and I had confidence already at the paddock. We decided to use cheekpieces hoping for a more aggressive performance,” said Lemaire, post race.

“His start was good, we were positioned well and he responded beautifully. The colt has such high potential. I had no doubt that he could land a Grade 1 win if he gave his best.

“I’m happy that it all worked out today.”

Air Spinel was settled on the rails in mid-division and struggled to find room in the early stretch but, once angling out and finding a clear path 300 metres out, shot out with the fastest closing speed, overtaking the tiring pace-setter in the last half-furlong while threatening the winner for second.

Wonder Lider (Statue Of Liberty), finished third after taking an economic route on the rail behind the winner up to the last turn and displayed a powerful burst, furiously chasing the runner-up to the line while holding off a strong challenge by Red Le Zele (Lord Kanaloa) to finish two and a half lengths behind the winner.

Cafe Pharoah, who won his first two career starts, went on to win the Unicorn Stakes (Gr 3,1600m) at start three but failed to deliver in the following Japan Dirt Derby (2000m) where, although sent off race favourite, was beaten into seventh on the sloppy-rated track.

Bouncing back and marking a win against older foes in the Sirius Stakes (Gr 3, 1900m) last autumn, he finished sixth in the other JRA Grade 1 dirt event, the Champions Cup (Gr 1, 1800m), on his most recent start in December last year.