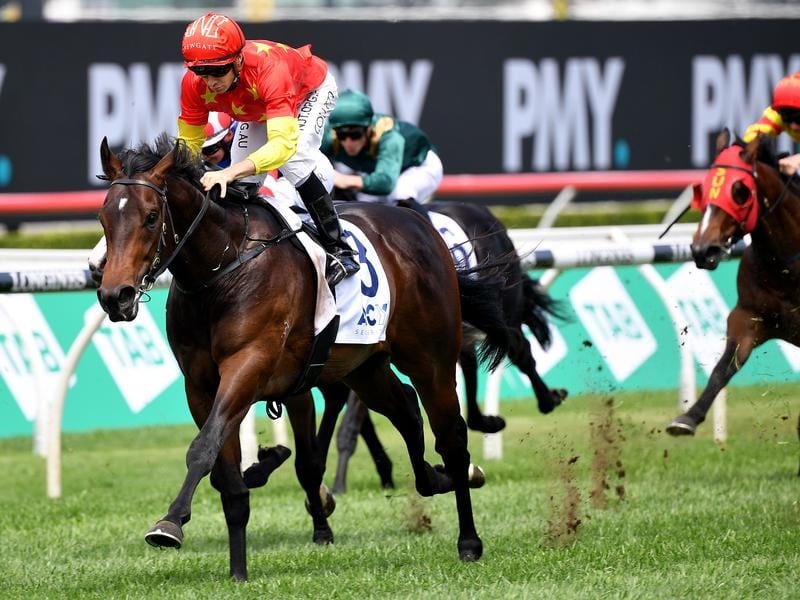 For Hunter Valley breeder Senga Bissett, it’s a good thing she trusted her eye when she ventured to the National Broodmare Sale on the Gold Coast six years ago.

Or perhaps more accurately, it was just as well – for Bissett, for Newgate Farm, the China Horse Club, Team Snowden and others – that she trusted what her eye couldn’t see. The judgments – and risks – she undertook that day have now spawned a Group 1 winner, following the Champagne Stakes victory at Randwick last Saturday of the exciting son of Capitalist, Captivant.

In 2015, she went to the Gold Coast with her mind on a daughter of Commands named Speedboat. Humble beginnings doesn’t begin to describe her.

Going through the yearling ring for just $25,000, she’d been bred by Contract Racing’s David Moodie and raced in the Victorian’s well-known silks of green with yellow and purple braces, carried by Group 1 winners Paint and Flamberge. The colours were where any similarity between those names and this one ended.

Speedboat had five starts and earned one placing, a third. That was at the traditionally well-patronised New Year’s Day meeting of 2015. No, not the one at Flemington, but the non-TAB semi-socials at Burrumbeet.

Still, at least she was only a three-year-old when offered at that broodmare sale, a prospect in the full bloom of youth and fitness, right?

In fact, what Bissett found was a filly who, while already let down four months after her last race, looked rather less than impressive.

“She was in paddock condition, which is how I like to buy them,” Bissett tells It’s In The Blood, “but while she was a big scopey mare, she looked quite weak, actually. She didn’t have a good race record, and I also put that down to the fact she looked pretty weak.”

Still, Bissett was not deterred. These drawbacks were a possible way into a female family, heavily entwined with Moodie, that she’d always liked.

It had begun with Sheeaun, a 1970 mare imported from Ireland who threw a stakes-winner here in Lauriat, and a filly called Kilmarie (Bletchingly), who won two of eight including one at Flemington. At stud, Kilmarie boomed, throwing around seven named foals for three stakes-winners – the first three, in fact.

She first threw a filly in Ride The Rapids (River Rough), who, raced by Moodie, won the Listed James Carr takes of 1992 and was placed at G2 level. Kilmarie’s second foal, another filly in Catchfire (Century), fared even better, taking the G2 Maribyrnong Plate and G3 Debutante Stakes of 1991. Then her younger full brother, I Love Sydney, won the G3 VRC Stakes of 1994.

Ride The Rapids embarked on a long career at stud and produced, as her sixth named foal, River Dove (Hurricane Sky), who brought Moodie a G1 Oakleigh Plate (13 years before Flamberge did), in 2003. River Dove went to stud and her second foal was the triple stakes-placed Fare Well (Exceed And Excel). Three foals later came full brother Headwater, a dual stakes-winner from just 11 starts – including the 2015 G2 Silver Slipper – who’s now making a name for himself as a Vinery stallion.

Before River Dove, Ride The Rapids had thrown River Express, a 1994 drop by Blazing Sword who won two from 17 for Moodie, including one at Flemington. Moodie also raced her second foal, the stakes-winning Cross Current (Keltrice), who won two Listed Melbourne events. And her last named foal – born when River Express was 17 in 2011 – was the filly who would catch few eyes at the track or the sales ring: Speedboat.

“We can’t afford to buy expensive mares but I do love that family and I always look at the mares from that family,” Bissett says. “She did look a bit weak, but I thought that was probably because she was one of the last foals out of an old mare. You could probably say she looked like an old mare’s foal, but she still had nice scope and an attractive head. So I forgave her that, hoping she wouldn’t throw types like that.

“I went a bit against the grain buying her because I usually like nice strong types. But her mother had been a good producer, so I weighed up the pros and cons and thought she was probably the only chance I’d have to buy a mare from that family.

“It’s the sort of family that you never know when a good horse is going to come out of it. All those mares could just throw stakes-winners.

“I’ve always been a big fan of Commands as well. He was another reason I liked the mare. I supported him just about every year he was at stud.”

Commands is ninth on this season’s broodmare sires’ list, having finished top 12 the three previous seasons. He was 43rd on that list in 2014, however, yet another reason Bissett faced scant competition as she secured Speedboat for $30,000.

Her gamble soon started to pay off.

“She’s quite lengthy and big, about 16.2 hands,” Bissett says. “And although she was weak when we bought her, she soon grew into a very nice mare.”

With her size in mind, Bissett chose More Than Ready. That first mating produced a filly attractive enough to yield $260,000 at 2018 Inglis Easter. She raced as Anna Cecelia, and won one at metro level in New Zealand from 17 starts.

Bissett next tried Wandjina, producing a colt named Pubboy, who’s been retired after one failed run at Mudgee. “Wandjina doesn’t really stamp his stock,” Bissett says. “They can be all sorts of different types, and this colt was nice but very big. You’ve got to forgive Speedboat for him.”

At least that led Bissett to choose Newgate’s first-season sire Capitalist. This would bring a 4×3 cross of Danehill. While this can be dicey when all-male, it can also be stunning when gender-balanced, as in this case (through Capitalist’s second dam Compulsion, along with Commands).

In any case, Bissett tends to breed more to type than stats, and was lured to Capitalist “because he’s a thick-set, not overly big horse, and I thought she needed a very neat type of horse”. The result was astounding.

“Captivant was the most glorious yearling,” Bissett says. “He had the scope and quality of the mare but the strength of the stallion, and an amazing temperament.”

That was reflected by Newgate/China Horse Club’s outlay of $550,000 to buy him, a tidy profit for Bissett given the cost of Speedboat and Captalist’s $55,000 service fee. The looks have also stood up, of course, with Captivant having now won two from six, running a strong fifth in the Golden Slipper, and with a strong three-year-old season in prospect.

“I was surprised he’s been such a good two-year-old, because I thought he looked more of a three-year-old since he was a big, scopey thing,” Bissett says, “but I think that’s just his quality coming through.”

Meanwhile, as per the breeder’s original hunch, Speedboat has indeed continued to throw good types. Ciaron Maher paid $300,000 at the Gold Coast in January for a colt by Hellbent, one so attractive Bissett now has his younger full brother.

“She’s not in foal now – I give them a year off after five foals,” Bissett says, “but she’ll be going back to Capitalist this year.”

It’s not hard to see why – certainly not as hard as looking beyond what met the eye when the astute Bissett first saw the unsung Speedboat.