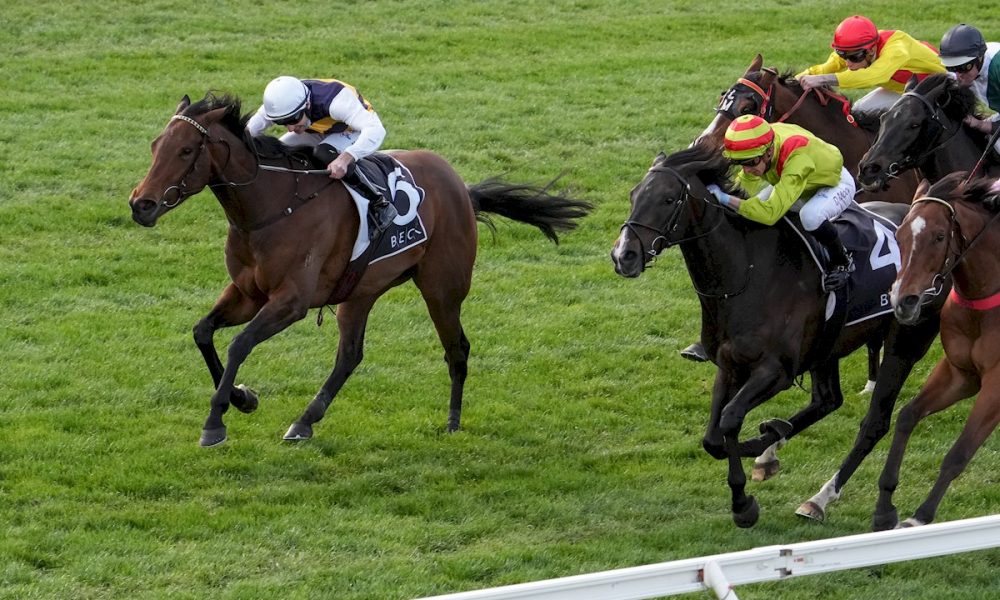 Gerry Harvey is not just a titan of Australian business but a colossus of breeding, an octogenarian whose acumen has brought billionaire status and, at last count, around 550 broodmares.

It’s a little surprising, then, when he makes the following declaration on the secret of making thoroughbreds: “I’d say it’s 98 per cent luck and two per cent ability,” he tells It’s In The Blood.

Asked if he’s sure about those numbers, he has a rethink and comes back.

That line of chaos theory seems to run counter to his sure progress in business as co-founder of what became the electronics giant Harvey Norman, but some similarities between his two worlds have emerged, albeit accidentally. They involve low, low prices.

Harvey bred Alligator Blood from his Baramul Stud in the Hunter Valley. The son of All Too Hard fetched $55,000 as a yearling, and has won $1.8 million so far, claiming the Group 1 Australian Guineas.

Another son of All Too Hard, Hard Too Think, sold for $45,000 as a yearling, and won the Group 1 Singapore Derby two months ago.

The last of the three fetched even less – just $25,000 – at Magic Millions in 2018. Not the marquee Gold Coast sale, but the somewhat less pricey one in Adelaide.

Harvey might have jumped the gun in mentioning her among the last three Group 1 winners he’s bred. But looking at how she won last Saturday, it’s not hard to imagine an elite-level victory in the future of the now five-year-old Chaillot.

Chaillot – who shares her name with the hill and the palais that tops it across the Seine from the Eiffel Tower – seems destined for lofty heights. In a career thus far limited to nine starts – including a year-and-a-half off after winning her first two starts to allow time for developmental issues around her joints and her back – Chaillot has now won five from nine, including three in black type. She was also a close fourth in last year’s Group 1 Empire Rose Stakes, and she’s now second favourite to fulfill Harvey’s slip of the tongue in this year’s edition.

“The way she finished off on Saturday was extraordinary,” Harvey says. “She’s a bloody beauty, that one. I wish I owned her!”

Harvey’s not too sure why Chaillot didn’t make it to the biggest sale of the Magic Millions enterprise, which he also half owns. It may have been linked to the dimmed appeal of Testa Rossa. The six-time Group 1–winning sprinter-miler was 22 by then and would be retired the following year (he still picks the grass at Vinery Stud, in which Harvey is also a major shareholder).

Testa Rossa’s average yearling price had dropped from a high of $95,000 in 2013, from 33 sold, to just $35,000 from the 14 auctioned in Chaillot’s year of 2018. Alexander and bloodstock agent Johnny McKeever didn’t just get her on the cheap, but for just two-thirds of her sire’s already low average.

“Chaillot was a really nice-looking filly. She was an eight at least, probably an eight-and-a-half.  Anything that’s an eight and above is a good sort,” Harvey recalls. “So why didn’t they buy her? I don’t know. A Testa Rossa filly for 25 grand? That’s really cheap.

“If they put her on the market tomorrow, they’d get a million-and-a-half in a flash. She’d be sold within 24 hours, because people would think they could buy her and win a Group 1. She’s only just turned five.”

Harvey’s mares are scattered across Baramul and his trans-Tasman operation Westbury. Bloodlines experts Luke McDonald and Russell Warwick workshop with him on matings in Australia and New Zealand respectively. Despite his vast number of mares and the fact he turned 82 this month, Harvey remains deeply involved.

“Every year I go through the horses, and then the stud managers and Luke go through and tell me what I did wrong,” he laughs. “They change it around, and then I change it around after that. Russell does the ones in New Zealand, then I’ll ring him back and have a fight with him about a few of them, and then we change them around a bit.”

So were there squabbles over the mating that created Chaillot?

“But probably the best ones I’ve sold are the cheapies. Every broodmare’s a well-bred horse, you know. There’s no such thing as a badly-bred broodmare really, looking at their pedigrees. They’re nearly always by top stallions, and they’ve all thrown plenty of winners. Families die off, then suddenly come good again three generations later. All sorts of things can happen, and you never know what you’ve got really, and I’ve been doing this since 1972!”

Crowning Tribute was imported to Australia in 2003 and Harvey bought her for $90,000 two years later. Her new owner’s first move was to send her to Encosta De Lago, which yielded the filly Mary Of Modena. She carried Harvey’s famous blue with white crossed sashes and cap to two placings from 12 starts. Next up, Crowning Tribute threw Lady Of The Garter, by Testa Rossa. She also had 12 starts, this time for three placings. Eventually, Harvey sold Crowning Tribute in 2014, for all of $1,000.

Then, the family started gathering steam. Lady Of The Garter threw a colt by Red Giant (USA) named Lim’s Racer. He won a Group 2 in Singapore, and was champion two-year-old there in 2016.

Mary Of Modena largely dithered around as a broodmare – first and second foals Tanned (Big Brown) and Bay Of Modena (Mossman) won once and twice respectively in the bush – until apparent gold was struck with her sixth foal, Chaillot. (Subsequent foals by Press Statement have been Media Man, a Newcastle winner so far, and Headline Queen, an unraced three-year-old showing promise for Mick Price).

You don’t have to look far to pick the probable magic in Chaillot’s pedigree. Mary Of Modena has a 3×4 cross of the super USA mare Fairy Bridge, who was unbeaten from two starts and who’s close descendants have reaped more than 100 Group 1s. She’s in Mary Of Modena’s sireline (Fairy Bridge-Fairy King-Encosta De Lago), and comes through the female line (Fairy Bridge-Sadler’s Wells-Ikebana-Crowning Tribute).

So was Harvey aiming to divine some order from the chaos in Chaillot’s 3x4x5 cross of Fairy Bridge?

“No, not really,” he says with a laugh. “But I’d always be happy with that, because you know what they say about in-breeding to superior females.

“The main reason I sent the mare to Testa Rossa was because we stood him at Vinery, but he was still a good sire,” Harvey says of the stallion who peaked on the Australian general list at No. 6 in 2009-2019, and whose best progeny have included Ortensia – who won Group 1s in Australia, Dubai and Britain (in the Nunthorpe Stakes), SA Derby winner Testafiable, and New Zealand sprinter Enzo’s Lad, a two-time winner of the Telegraph Handicap.

“But put it this way: All I know is the next time I see a horse with Fairy Bridge a couple of times in its pedigree, that’s where I’m going.”