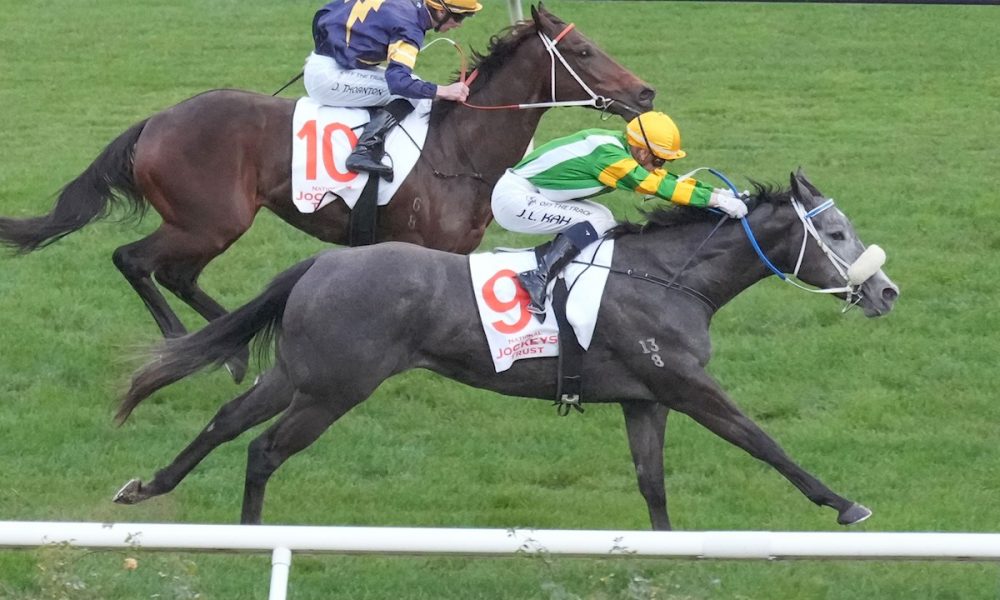 Rough shod is not a phrase you’d normally want associated with your gallopers, but breeding behemoth Stuart Ramsey hopes those words are the key to exciting times ahead for unbeaten mare Chain Of Lightning (Fighting Sun).

The four-year-old homebred made it four wins from four in adapting smoothly to the Flemington straight and Benchmark 84 class with an impressive half-length success over 1100 metres last Saturday.

The striking grey-brown daughter of Perugino (Danzig) mare Magic Art began racing as a three-year-old at the start of the year with Stirling Osland in Armidale, having one Tamworth barrier trial – a winning one – before January successes at Inverell and her home track.

Her class apparent, Ramsey switched her to his old friend Peter Moody in Melbourne, where she first scored at Caulfield in June, crashed through the gates to become a late scratching at the same track on July 23, before her day of atonement last weekend.

Chain Of Lightning is threatening to become the most successful offspring of her sire Fighting Sun (Northern Meteor), who could be said to be ill-fated in two respects: he died of colic, aged only nine, two years ago, but also his six crops haven’t exactly gushed success. He’s sired 146 winners from 286 runners, with just three Listed victors the highlights.

The pedigrees maven also bred both Fighting Sun and Magic Art and feels a vital factor in both – and which has thus been duplicated again in Chain Of Lightning – is the presence of the aforementioned British mare, Rough Shod (Gold Bridge), a northern hemisphere breed-shaper.

Foaled in 1944, Rough Shod was no great weapon on the track, winning one from seven, but was a star in the breeding barn. She threw Ridan (Nantallah), America’s co-champion juvenile male of the early 1960s, and his younger full sister Moccasin, who won 11 of 21 for Claiborne Farm and was champion two-year-old filly and joint horse of the year in 1965. Moccasin, in turn, threw no fewer than seven stakes winners including 1973 English and Irish champion juvenile male and later successful sire Apalachee (Round Table), as well as Belted Earl (Damascus), Ireland’s champion sprinter and older male of 1982.

In keeping with the shabby footwear theme, in 1964 Rough Shod also threw a third full sibling to Ridan and Moccasin, named Thong. Another Claiborne Farm product, Thong was placed at Grade 1 level before a glittering career at stud.

But before all of those, Thong’s first foal was, in name and deed, Special. Another offspring of Forli, Special was restricted to just one start, but gained eternal fame at stud. Among others, she was the dam of 1980 French champion miler Nureyev, and the granddam, via Fairy Bridge (Bold Reason), of two full brothers by Northern Dancer: one was top-tier winner Tate Gallery; the other the monolithic Sadler’s Wells.

Rough Shod is in both sides of Northern Meteor’s ancestry, with Moccasin being his third dam, and also comes through Fighting Sun’s female side, with his second damsire being Geiger Counter (Mr Prospector ex Thong). Ramsey feels the Rough Shod repetition through Chain Of Lightning’s damsire Perugino – best known as the sire of Testa Rossa – may just have done the trick.

“It’s a very successful family, the Rough Shod family, so to get a couple of crosses of that should be a good thing,” Ramsey told It’s In The Blood.

The taproot for Chain Of Lightning’s female family came with the importation in the 1980s of her fourth dam, Irish mare Hula Gold (Rheingold). And Hula Gold’s fourth dam is the great La Troienne (Teddy, 1926).

Chain Of Lightning has liberal splashes of that French-bred blue hen – 10Sx10Sx8Dx10Dx8D – four through her son Bimelech (Black Toney), and along the bottom line via her daughter, champion US racemare Black Helen (Black Toney).

Ramsey tapped into the family by buying Mardi’s Magic off the track following a successful career for Clarry Conners in which she won the Magic Night Stakes (Gr 2, 1200m) of 1998.

“I bought her because she was a Group 2-winning two-year-old. I wanted to buy her full sister too, but I didn’t,” Ramsey said.

The sister in question, out of Hula Gold’s daughter Sunset Beach, was Surrealist. She didn’t win in five starts, but went on to further enhance her family by throwing five-time Group 1 winner Racing To Win (Encosta De Lago), Australia’s champion three-year-old colt of 2006. She also threw his full sister Pinocchio, the dam of Everest winner Classique Legend (Not A Single Doubt), and a second stakes winner in Purrealist (Tale Of The Cat), who’d sire Queensland Derby (Gr 1, 2400m) winner Hawkspur.

Chain Of Lightning is only the third named foal of Magic Art, who’s now 17. The first was Dinherio, whose sire Money Or The Gun (Octagonal) effected another cross of Bletchingly, but who never made it to the track.

A first visit to Fighting Sun produced Magic Sunset, a $70,000 yearling sold to Tony McEvoy and James Harron Bloodstock who won her second start at Gawler by six lengths but was retired with two wins from nine tries.

“She could run but she was a bit soft in the bones,” Ramsey says. “So I didn’t want any pressure on Chain Of Lightning. Stirling Osland does a real good job, settles them well. He’s not getting enough credit out of this but he will.

“She didn’t race till she was three, won her first race, and I wanted to spell her then. But I weakened and let him (Osland) twin two.

“The prize-money in the bush is so good nowadays. We’re changing our model a bit, and we’ll be running a lot more in the bush. They run well and they get confidence. You’ve only got to look at the confidence and the will to win Chain Of Lightning has now.

“She’s looking good so far but, I dunno, I’ve had them before. But people must think she’s got some ability, because I’ve had a few calls about buying her already, and you don’t get that often about mares.”

And that was all she wrote.

Ramsey sold Magic Art only late last month at the Inglis July Online Sale, for $3,250. It came before Chain Of Lightning’s Flemington win, and just after her late scratching embarrassment. Had the sale been this week, a far higher price could have been expected for the 17-year-old.

“You can’t keep them all,” Ramsey says. “And we’ve kept these three younger fillies out of Magic Art, so that’s where the future is.

“But this is what happens in this game. If Chain Of Lightning hadn’t gone through the barriers that day, Magic Art would have made ten or fifteen grand more.

“But someone will be happy, which is good.”