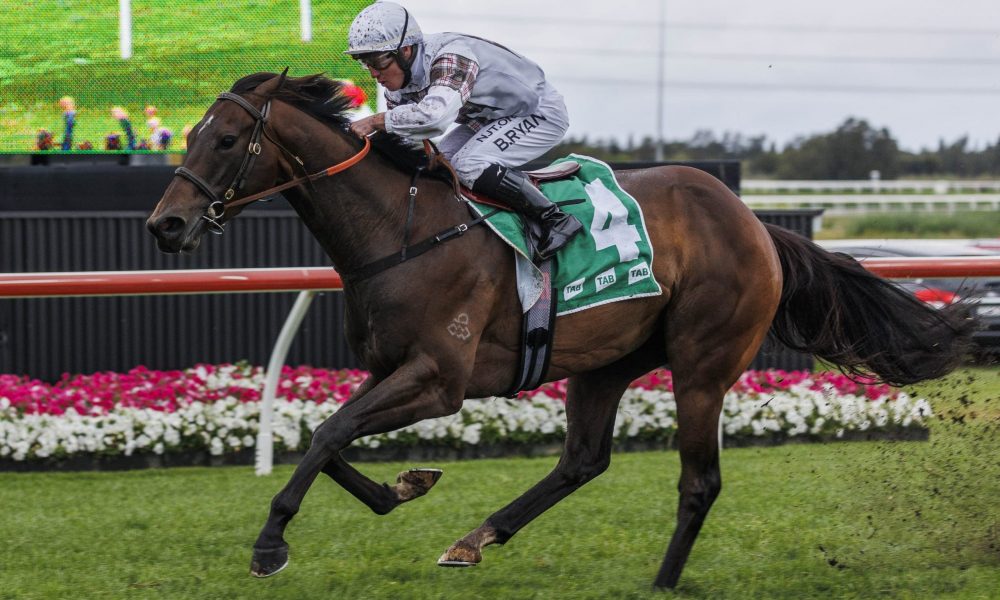 The beauty of yearling sales is they’re like the lolly display in the old corner shop: there’s something for everyone.

Japanese sires have proven a little hard to market in Australia. And many buyers might eschew lightly-framed horses, or unraced dams.

But those factors meant three big ticks for Rob Price at the Gold Coast Magic Millions sale in 2019.

Price, who trains at Kembla Grange with son Luke, smashed the budget to chase Lot 231. It was a colt put up by Arrowfield by their first season Japanese sire Real Impact (Deep Impact), from the Redoute’s Choice (Danehill) mare Timeless Choice, who’d been retired by trainer Mick Price unsound and all but unseen, winning her sole barrier trial.

Those two new races most probably also give the gelding the title of the highest-earning horse without a stakes win to his name. It’s hard to imagine things will stay that way for long, with 2022 targets including the TJ Smith (Gr 1, 1200m) and All Aged Stakes (Gr 1, 1400m). There’s another non-black type event on his horizon too, called The Everest (1200m).

In any event, the astute – not to mention knowledgeable and highly entertaining – Rob Price has already reaped immense rewards from his judgement.

“I left the sale grinning like a Cheshire cat,” he tells It’s In The Blood. “I thought he was great buying.

“Our ceiling was probably only $80,000, but you’ve got to form a market. We’d missed a few that day, and if you really like something you’re better off going that bit further rather than going home and giving yourself an upper cut.”

The yearling was from Real Impact’s first Australian crop at John Messara’s Arrowfield. Then 11, the son of the all-conquering Deep Impact (Sunday Silence) was known to the Australian market, having been another of these Japanese horses who’d raced here, ultra-impressively. Having become the first three-year-old to win the Yasuda Kinen (Gr 1, 1600m) in 2011, he came south at six and took the 2015 George Ryder Stakes (Gr 1, 1500m) to complete a dual hemisphere Group 1 double, and followed with a strong second in Kermadec’s (Teofilo) Doncaster (Gr 1, 1600m).

“That Ryder win seemed to get under everyone’s radar,” says Arrowfield’s pedigree analyst Peter Jenkins. “Probably because it was the race after Vancouver won the Golden Slipper, but it was quite an achievement, to beat Criterion and Kermadec into the placings and, I’m pretty sure, becoming the first Deep Impact horse to win Group 1s in two hemispheres.”

But then, despite the strength of their horses – from champions like Almond Eye to those more familiar here like Melbourne Cup (Gr 1, 3200m) winner Delta Blues (Dance In The Dark) and Cox Plate (Gr 1, 2040m) victor Lys Gracieux (Heart’s Cry) – Japanese sires have been a little slow to take off in Australia.

“The Japanese stallions have had a bit of a lukewarm reception. We’ve had to kind of make them ourselves,” Jenkins says.

“But we, like Darley and Coolmore, know it’s hard to market horses who didn’t race in this jurisdiction. The bias towards local horses is very strong. There’s good reason for that, but that doesn’t mean you should exclude other horses. More Than Ready was a dirt track horse in America and he’s done better as a sire here than in the US.

“It is true a lot of sires that raced in different jurisdictions simply aren’t suited to here. But John and I agree, the conditions in Japan and Australia are quite similar, so there’s a good chance of transference.”

The times, and the appreciation of Japanese sires, may be changing. With Count De Rupee leading the way, Real Impact has leapt to the top of the Australian third season sires’ table (this time shading third-placed Vancouver), with his first crop having supplied 20 of his 23 winners this season. Deep Impact’s son Profondo was a Group 1 star of the Sydney spring. Maurice (Screen Hero) has sired VRC Derby (Gr 1, 2500m) winner Hitotsu and has Port Louis making waves.

The first seven yearlings by Maurice’s barnmate Real Steel, another son of Deep Impact, will be offered in January. That will be another test of Japanese popularity, but one man who never needed convincing was Rob Price. He’d long admired the toughness of Japan’s visiting horses and is certain he knows the reason.

“The controlled breeding they have in Japan,” he says. “One of the biggest things that haunts us these days is horses with breathing difficulties, but the Japanese are all over that. If there’s a horse with a breathing problem, it’s not allowed to go to stud. You’re getting these perfect, symmetrical airways that are extremely efficient. Count De Rupee has proved that theory. His recovery is just insane.

“We’re probably only just scratching the surface of the horses coming out of Japan. Their stayers are possibly the best in the world. It’s a bold statement when you see what they can do in the UK, but it looks that way to me.

“We should probably take a leaf out of their book and control our breeding industry better, and not breed out of horses who have been diagnosed with prolapses and upper airway faults.”

Price accepts breeding is more easily controlled in Japan. Likewise the UK, where generally wealthy owners don’t need to send roarers and the like into stud careers. In Australia, where racing remains more accessible to the rank and file, there’s a greater need to seek to recoup outlays after a racing career.

“Someone here buys a filly, it shows ability, wins a maiden, but all of sudden they run into a breathing problem,” he says. “They get the operation done, it often doesn’t work. The pity is you’re tying the palate completely open, any dust or bacteria around ends up in the lung, and they’re constantly getting little infections here and there. But anyway, next thing you know, the owner thinks ‘It could gallop, this thing, so it should make a broodmare’.”

“I bumped into James McDonald, by chance, who’d ridden him in those races, and he said Real Impact was one of the strongest horses he’d ever thrown a leg over,” said Price, also taken by the yearling’s looks.

“He was a real good looker but he didn’t suit everyone, which is why he was affordable. A lot of people don’t like lightly-framed horses, but they suit us because we’ve only got a small stable,” says Price, whose team has 53 horses on its books. “We can mollycoddle them if we have to, not that we’ve had to with this bloke.”

The loquacious former trackwork rider had no chance meeting with his fellow trainer and namesake, Mick from Melbourne; he sought him out. And after Price met Price, one knew he’d meet whatever price it took.

“I’ve never had a problem with asking a question,” Rob laughs. “Mick had a wrap on the dam Timeless Choice, which you’d expect as she’s a full sister to Lankan Rupee. He’d looked at the colt, but there’s only so many a trainer can buy.

“Timeless Choice was unsound, so Mick had retired her, young and unraced. They make good broodmares, those ones. And again, if any problem is passed on, we can take our time, let them mature, adjust their work.”

Jenkins says at the time Coupe De Rupee was bred, Deep Impact had sired only one Group 1 winner out of a Danehill (Danzig) line mare. A couple of months later, Satono Ares made it two.

“That was the start of a nick that we thought would work, because the Halo line over Danzig-Danehill line theoretically is a good cross, and has been proven to be,” says Jenkins, noting Profondo – out of the Redoute’s Choice mare Honesty Prevails – is enriching the mixture.

Redoute’s mares are clearly Real Impact’s best nick, with 11 winners from 15 runners. Meanwhile, sons of Deep Impact over mares by sons of Danehill have yielded 102 foals, six of whom have been stakes horses, with four of those being by Real Impact.

All of which also wasn’t known when Rob Price bought the yearling who’s now making his and Luke’s job very easy.

“Slow horses are hard to train. Good horses just turn up and do it no matter how crap a trainer you are,” says Price, who gained much of his nous from the late Guy Walter.

“Guy said that to me about Tie The Knot. He told me all the mistakes he’d made with him. With Guy’s ability, they weren’t big mistakes, but he said, ‘It really didn’t matter what I did. He was just a Group 1 horse and that was that. They just turn up, and it’s what they’ve got inside of them, something we all can’t see, which makes all the difference.”

Trevor Marshallsea is the best-selling author of books on Makybe Diva, Winx, and Peter Moody