Cummings blessed with a touch of grandfather’s magic 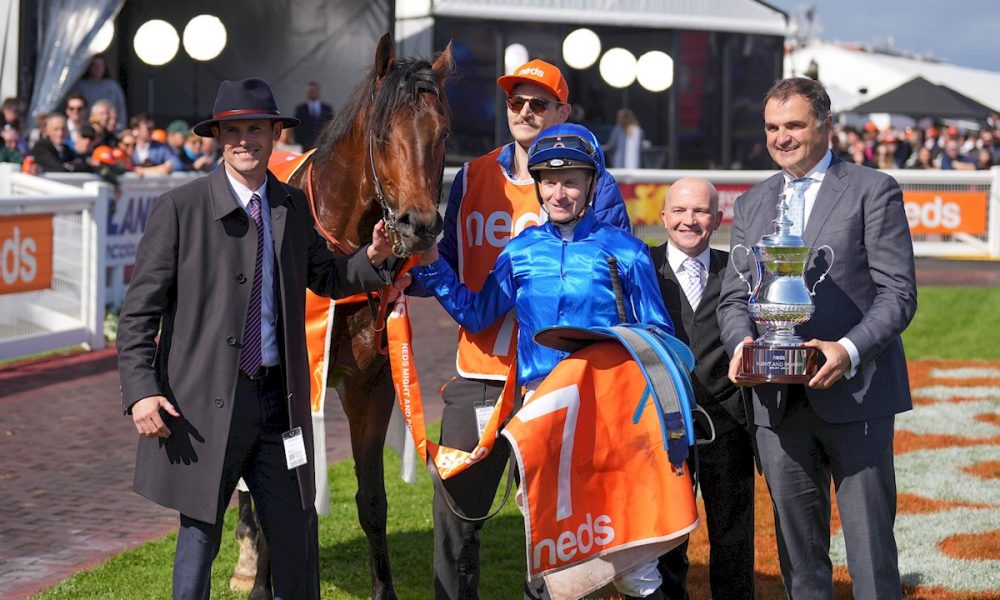 “There’s no doubt at all he has something of his grandfather in him when it comes to horses. Call it an innate or a sixth sense. He’s a generational horse trainer who seems to know how to react, how to respond to each individual animal,” Cox said in the wake of the team winning four stakes races, including two Group 1’s, at Caulfield last Saturday.

It was almost certainly the most successful racing day for Godolphin Australia under the leadership of Cox and Cummings, who were appointed in 2017, notwithstanding that Cummings had previously enjoyed Group 1 doubles on Golden Slipper Day in 2019 and on Doncaster Mile Day in 2021.

Cummings joined the operation a few months before Cox and the current managing director concedes that his predecessor Henry Plumptre, along with John Ferguson, can take the credit for the appointment of the then 29 year-old Cummings.

“Henry (Plumptre) takes the kudos on that call. I started later that year (2017) but I do remember when I first arrived that you could tell James had something about him which set him apart from most people.

“He’s highly articulate and a deep–thinker who is constantly evaluating feeding and training programs. He’s meticulous in his planning of where to place his horses and how they should be ridden. He’s good to work with and he has a huge support team around him which he respects and I’m sure that’s mutual.

“He’s always seeking the opinions of those around him including those on the ground, whoever is around and often that has them stopping and thinking to give a considered response. The results now speak for themselves,” Cox said.

Cummings has trained 32 Group 1 winners under the Godolphin banner in six seasons and you’d expect that tally to grow before this racing year ends. That betters Peter Snowden’s tally of 29 Group 1 winners in seven seasons for the operation.

Snowden was succeeded by John O’Shea, who insiders say did a particularly excellent job with the older Godolphin horses at the time. O’Shea trained ten Group 1 winners in just three seasons including the Golden Rose winners in successive years.

O’Shea and Snowden are outstanding trainers who continue to excel at their craft, but in terms of Godolphin success they have been eclipsed by the young Cummings who many doubted would have the people skills to oversee such an operation. They were wrong.

O’Shea, Snowden and Cummings, interestingly, will face off in The Everest this Saturday as they are represented – respectively – by Lost And Running, Mazu and Ingratiating –  while O’Shea has the Caulfield Cup in his sights with Benaud and Maximal.

And in another tangent of Godolphin’s influence, John Ferguson’s son James – who’s been training only since 2019 – has a Melbourne Cup runner in Deauville Legend and has despatched Cox Plate contender El Bodegon to Chris Waller.

After his Group 1 wins with Anamoe and Golden Mile last Saturday, Cummings has trained 42 winners this season at an amazing 20.7% strike rate for prize money of $7.9 million. Last season he had 158 winners earning $19.6 million.

Those numbers compare more than favourably with Charlie Appleby’s runners earning approximately $10.6 million for Godolphin in the current British flat season, which is drawing to a close. Admittedly that doesn’t include his international successes and as Cox concedes it is also a reflection of the great prize money on offer in Australia.

“We are hugely funded here and the depth of our prize money is well known right around the racing world. We are fortunate and we cannot be complacent. Corporate bookmakers are growing their market share and they must pay their way. That’s vital as is the integrity of our product, ensuring the confidence of our punters.

“We need to maintain the funding to promote staff education and welfare as well as prize money and we need to carry the wider community along with us as we demonstrate our commitment to animal welfare and other key issues,” Cox said.

As to last Saturday, Cox says it was the most successful raceday in his time at the helm.

“Four individual stakes winners; an outstanding prospect in Golden Mile, who we identified very early as a Guineas type horse, a great horse in Anamoe whose six Group 1 wins equals the best tally by any Godolphin horse worldwide (with Daylami and Fantastic Light) and who now hopefully, fingers crossed, has the chance to stretch that to seven in the Cox Plate.

“Add the colts Paulele and Ingratiating, horses we bred who could well join our stallion roster in the future. It brings in the whole organisation with virtually everybody having had something to do with them at various stages of their career,” Cox said.

And these successes, of course, improve the operation’s bottom line which ought not be underestimated according to the man in charge in Australia.

“We are no different to any other business. Accounts, income and outgoings are scrutinised regularly and vigourously. We have to justify what we do,” Cox said.

The reckoning should read very well of late.

With an easing of Covid related restrictions, the Hong Kong Jockey Club is confident that the international meeting can return to something like the cosmopolitan celebration of top–class racing it was pre-pandemic.

“With the Hong Kong Government having removed the compulsory hotel quarantine requirement and most of the social distancing measures, we are looking forward to welcoming back owners and fans from overseas with all the events that are part of HKIR back on the program, including the Friday night Gala dinner, the IFHA World’s Best Jockeys Award ceremony, trackwork breakfasts, fans back on course on and all the other HKIR-related events that makes this week in Hong Kong the perfect end to the year,” a Jockey Club spokesman said.

Saturday’s Everest contender Eduardo is among the early nominations for the Hong Kong Sprint.