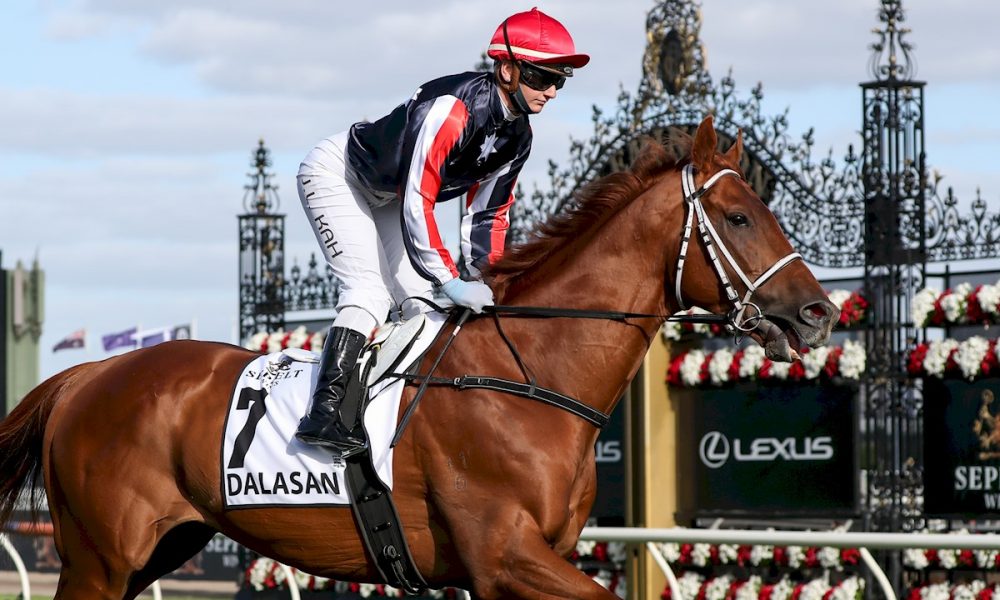 Sam Hayes will feel a sense of pride when Dalasan (Dalakhani), a five-year-old entire bred, owned and trained in South Australia, lines up in Saturday’s Cox Plate (Gr 1, 2040m).

The Cornerstone Stud principal may not have any direct attachment to the Leon Macdonald and Andrew Gluyas-trained Dalasan, who was bred and part-owned by well-known South Australian Harry Perks, but the meritorious achievement of the “state” having a prospective runner in the weight-for-age contest is not lost on Hayes.

Dalasan, by the late Cornerstone Stud shuttle stallion Dalakhani (Darshaan), was conceived at the South Australian stud in 2015, the last of three consecutive seasons the striking grey shuttled from France to Australia.

“He loomed early in his career to be a really likely stallion prospect and he didn’t quite hit the right type of Group 1 and now he’s probably in some of the best form of his life and he’s obviously handled remaining a colt,” Hayes told ANZ Bloodstock News.

“The fact that he was bred here in South Australia, Harry Perks is a good friend of ours, and it’s a nice story that keeps on giving.

“We can’t wait for the race. I think Leon and Andrew have got him very well and he certainly warrants a spot in the field.”

Just how Dalakhani came to be on the Cornerstone Stud roster is a backstory in itself and one that proves that perseverance can pay off.

“It was a great story, really. It was (well-known agent) Hubie De Burgh, a family and industry friend, who mentioned to us that the Aga Khan Stud’s team could potentially be interested in shuttling a horse like Dalakhani,” Hayes recalled yesterday.

“Darren Thomas, of Seymour Bloodstock and Thomas Foods, was my business partner at the time. We flew up to Europe to see if we could get him down here (in 2012), and that was unsuccessful, but then we went again the next season to come up with a deal.

“We structured a deal whereby we leased him and we had him in South Australia for three years, and he would have come back again.

“He was standing for a fee of $20,000 and covering pretty good books of 90 to 100 mares from memory, but eventually, being a grey and being almost white in the end, he started to get cancerous growths and his fertility dropped back to zero and was unable to get mares in foal.

“His last season standing anywhere was here in Australia.”

Dalakhani, who only died in January, was certainly successful in Europe with his now Westbury Stud-based son Reliable Man, a Queen Elizabeth Stakes (Gr 1, 2000m) winner for trainer Chris Waller, among his haul of 55 stakes winners in both hemispheres.

The Cox Plate is arguably an underrated source of quality stallions. Savabeel (Zabeel), the 2004 Cox Plate winner, is a champion sire for New Zealand’s Waikato Stud, while his barnmate Ocean Park (Thorn Park), the 2012 Cox Plate winner, has made an impact at stud.

Back-to-back winner So You Think (High Chaparral) (2009-2010), who stands at Coolmore, was Australia’s most popular stallion with breeders last year while his roster mate, 2014 Cox Plate winner Adelaide (Galileo), has Group 1-winning daughter Funstar, who was sold for $2.7 million as a broodmare this year, to his credit.

Further back, Octagonal (Zabeel) – the sire of Lonhro – won the Cox Plate in 1995 and Rubiton (Century), the sire of dual Cox Plate winner Fields Of Omagh, won the race in 1987.

Furthermore, co-trainer Natalie Young said on Sunday that she and training partner Trent Busuttin could direct Forgot You (Savabeel) to the Cox Plate in order to increase his stallion appeal.

“Dalasan probably deserves his opportunity at stud regardless. While 2000 metres isn’t as sexy as a 1200-metre two-year-old race, when you look at those horses such as Savabeel and Shamus Award – you only have to look at last weekend that it’s not bad breeding a 2400-metre winner.

“Based on how he’s going this prep he deserves a commercial opportunity at stud. Tavistock is no longer and Savabeel did win a Cox Plate, but he profiles up a bit like them.”

Dalasan might be at $34 with bookmakers ahead of this morning’s Cox Plate final acceptances and barrier draw, but come Saturday Hayes will be cheering loudly if Dalasan, the pride of South Australia, hits full throttle at the top of the short Moonee Valley home straight.

“Dalasan is an interesting subplot in the race. We were so proud of the fact that we were able to shuttle a stallion on behalf of the Aga Khan Studs,” he said.

“It was one of the few shuttle deals they’d ever done and I think one of the first at the time. It was a little feather in our cap and something that we are still very proud of.

“To see Dalasan still racing at the elite level, we love that connection.”