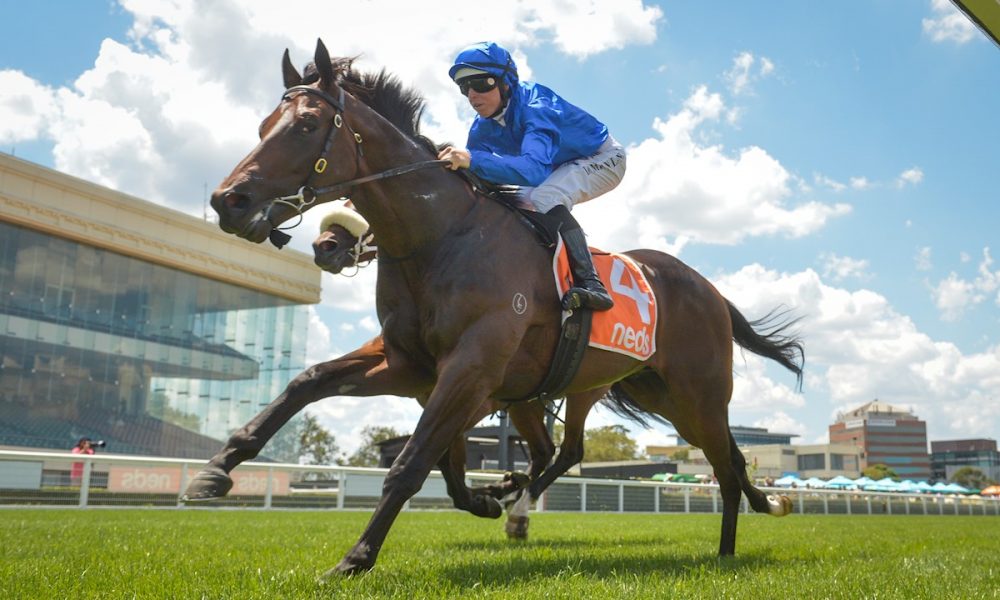 The Anthony and Sam Freedman-trained Daumier (2 c ex Ilustrates by Street Cry) emerged as a serious contender for the Blue Diamond Stakes (Gr 1, 1200m) next month when he took out the Blue Diamond Preview (C&G) (Listed, 1000m) and in doing so handed the former Darley inmate Epaulettes (Commands) with his 17th individual stakes winner.

In landing the race, Daumier joined Hanseatic (Street Boss), Cohesion (Lonhro), Mohave (Exceed And Excel) and Sepoy (Elusive Quality) as a Godolphin-owned winner of the Blue Diamond Preview for the colts. Three of those made the feature itself, with Sepoy taking the Blue Diamond in 2011, while Mohave finished sixth to stablemate Earthquake (Exceed And Excel) in 2014 and Hanseatic was just denied by Tagaloa (Lord Kanaloa) in 2020.

Yesterday’s win by Daumier may not have had the sheer brilliance of a Sepoy or a Hanseatic, both of whom proved clearly superior to their rivals, but there were signs that he may be worth far more than that initial margin of half a length suggests.

First out of the gates under Damian Lane, the Anthony and Sam Freedman-trained Daumier remained outside the eventual leader, his stablemate and hot favourite Philosopher (Zoustar), in the small field of five.

On the turn, Philosopher quickly came under pressure and Rampant Lion (Frankel) surged to the lead three-deep, appearing to take the race by the scruff of the neck.

However, Daumier dug deep between runners and was clearly holding Rampant Lion through the line, suggesting that the step up in trip should suit as he heads to the Blue Diamond Prelude (Gr 3, 1100m) on February 12, which he will take in en route to the Group 1 at Caulfield on February 26.

The overall time was slow, 57.75 seconds being the third-slowest Preview of the past decade, but that was exacerbated by a small field and Daumier looks one to appreciate a stronger tempo at which he can chase.

“He’s going to meet a bigger field in the Prelude and we would anticipate him to be a pair further back. He relaxes well in his races and he should have no problem getting out in trip.”

Lane added: “He’s a lovely colt. He’s taken really good improvement in this preparation and he is taking it all in his stride. He was really field-shy in his first preparation and he’s improved a lot in his second and improved again into today. He took it all in his stride behind the barriers, remained really calm and is one of those horses that is doing everything right at the right time and should progress again.

The seeds were sown more than three decades ago when the Inghams, under their Woodlands Stud banner, purchased Daumier’s fourth dam Mythos (Night Shift) in 1990. It was one of the many families that joined the Darley banner in 2008.

Having stood at Darley for seven seasons, the son of Commands (Danehill) was sold to the Turkish Jockey Club last year and this win highlights the club’s knack for acquiring stallions just before they strike success in their home countries.

While it may be too early to suggest that will be the case for Epaulette, who departed for his new home in Karacabey in Turkey’s northwest in October, the victory of Daumier in yesterday’s Blue Diamond Preview suggests that the former Darley stallion may yet join that group who have had their best progeny hit the track once they have departed their original homes.

Daredevil (More Than Ready), whose daughters Swiss Skydiver and Shedaresthedevil won the Preakness Stakes (Gr 1, 9.5f) and Kentucky Oaks (Gr 1, 9f) respectively after his move to Turkey, is one. He has since returned to the United States and is now standing at Lane’s End Farm in Kentucky. Other stallions to have experienced similar success following their move to the jurisdiction include Authorized (Montjeu), whose son Santiago would go on to win that year’s Irish Derby (Gr 1, 1m 4f), and Super Saver (Maria’s Mon), with five of his eight Group 1 winners having come since he arrived in Turkey.

Whether Daumier can catapult Epaulette into that company by the end of the 2022 breeding season remains to be seen, but there is now no doubting the colt’s talent.

A mere 35 minutes later, it was the turn of the fillies in their own Blue Diamond Preview (Gr 3, 1000m). On times, they won the battle of the sexes, clocking in almost six-tenths of a second faster than the males in 57.18 seconds in what was the second-fastest fillies’ Preview of the past decade.

While plenty had their chance during the long stretch run, it was early leader Miss Roseiano (2 f ex Special Lover by Pins) who fought off every challenge that came her way to score by a half-length and in doing so handing her sire Exceed And Excel (Danehill) his 192nd stakes winner.

It was a particularly impressive win given that she had crossed from a wide gate to lead and appeared so professional when asked to dig in against quality fillies. Fellow first-starter Written Swoosh (Written Tycoon) closed to within a half-length, while Flemington debut winner Latizia (Capitalist) and blueblood Waltz On By (I Am Invincible) fought out third a further length away.

“You come to the race on a difficult day like this and you don’t know what you’ve got,” Gelagotis said. “We thought we knew what we had. She’d had only one trial, and I know it’s easy to say after the race, the last month has been really difficult with her.

“We’ve had a lot of good horses, but this is one out of the box. To see what she did, to that opposition, on a day like today on her preparation so far, it’s exciting to be a part of another good horse.”

Her dam Special Lover (Pins) finished third in the Hill Smith Stakes (Listed, 1800m) among only four starts and she has now produced two foals to race, with Miss Roseiano joining Moonee Valley winner Easy Single (Not A Single Doubt).

Daumier was shortened into $8 second favourite for the Blue Diamond Stakes with TAB, while Miss Roseiano sits on the third line of betting at $10, both behind the Mick Price and Mick Kent Jnr-trained Jacquinot (Rubick), who heads the market at $5.