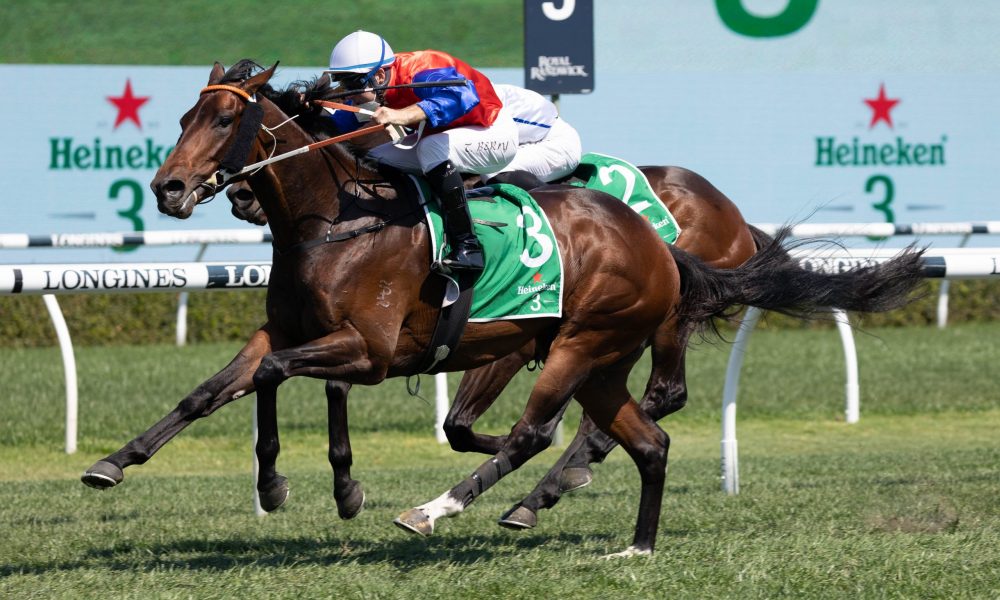 Hilal (Fastnet Rock) takes the first step on a planned stallion-making spring in the Missile Stakes (Gr 2, 1200m) at Randwick today, with Emirates Park hoping his early withdrawal from Sydney’s sodden autumn will pay dividends for the high-class four-year-old.

It was hoped the Team Hawkes-trained bay would blossom further in the autumn, but Sydney’s wet weather submerged those ideas.

After a first-up fifth on a Soft 5 in the Group 3 Eskimo Prince Stakes over the unsuitably short 1200 metres, Hilal gave his more vaunted contemporary Anamoe (Street Boss) a major scare when a neck second to the Cox Plate (Gr 1, 2040m) runner-up in the Hobartville Stakes (Gr 2, 1400m) at Rosehill.

That was on a Soft 6, but then the deluge began. Hilal put up what connections regarded a very strong fight when a two-and-a-half-length third to Converge (Frankel) and Anamoe in the Randwick Guineas (Gr 1, 1600m) but then, in his second straight start on a Heavy 9, he was seventh of nine in the George Ryder Stakes (Gr 1, 1500m).

Even before Randwick’s main carnival began, with more rain ahead it was decided to end Hilal’s autumn early, affording a lengthy spell of some seven weeks. Some results have been on show, with a noticeably stronger Hilal comfortably taking a 900-metre Rosehill barrier trial on July 29 – despite a Heavy 9 – with Group 1 winners Mo’unga (Savabeel), Hinged (Worthy Cause), Montefilia (Kermadec) and Nimalee (So You Think) filling third-to-sixth.

Today’s 1200-metre set weights plus penalties Missile Stakes – in which he shares topweight of 57.5 kilograms with Count De Rupee (Real Impact) – may still be slightly too short for Hilal as he begins his spring. Rather than venture down the Cox Plate path likely to be trodden by Anamoe, he will, according to Bryan Carlson of breeder-owner Emirates Park, most likely be aimed at 1600-metre Group 1s. The spring list of those comprises Randwick’s George Main Stakes and Epsom Handicap, Caulfield’s Toorak Handicap and Flemington’s Makybe Diva Stakes and Champions Mile (former Cantala Stakes).

But, weather permitting, Hilal’s connections are ebullient about his prospects of adding another Group 1 to his family’s vast collection, and sealing his progression to stud next year, most likely after an autumn campaign.

“He’s come back looking great,” Carlson told ANZ Bloodstock News. “He won his trial quite easily, and Saturday we should see a good start to his campaign.

“We wouldn’t want him on something like a Soft 7, but it should be a Soft 5 by raceday, and while 1400 to 1600 would be better distances for him, if he can get a bit of luck he’ll be there in the finish.

“It was a frustrating prep in the autumn, just one to forget basically. We’d been confident of some autumn wins but it just came up too wet. When he did have a decent surface he nearly beat Anamoe in the Hobartville.

“So we pulled the pin after four starts, and I think we pulled up at probably the right time. We put him in the paddock early, well before the end of the Sydney carnival. So he’s had a good, long spell and he’s come back really well. By contrast, a lot of those horses who kept going were exhausted by the end of the autumn carnival, because they’d been running around on wet tracks.

“If he can get a Group 1 under his belt, he’ll go to stud next year. We’ll see what happens, and there’s probably no reason not to race him in the autumn if he’s in form, but he’s a lovely, sound horse with a good pedigree, who deserves a place at stud.”

Reflecting today’s distance doubts, most betting houses had Hilal at $12 last night, around the same mark as Nimalee, who spelled after just a three-start autumn campaign capped by her win in the Queen of The Turf Stakes (Gr 1, 1600m) at Randwick.

Shorter-course gallopers Belluci Babe (Per Incanto), Count De Rupee and Embracer (Sebring) were on the second line of betting behind a resuming star from the autumn, Forbidden Love (All Too Hard).

The Michael Freedman-trained five-year-old mare, in contrast to Hilal, emerged from a moderate – and dry – 2021 spring to thrive in Sydney’s bogs earlier this year. She won three in a row on heavy tracks, the last two in the Canterbury Stakes (Gr 1, 1300m) and George Ryder Stakes (Gr 1, 1500m), before a fighting fourth in the Doncaster (Gr 1, 1600m) and a campaign-closing eighth in the All Aged Stakes (Gr 1, 1400m).

Forbidden Love also warmed up with a barrier trial win – by a long neck ahead of just three Group-quality rivals in Count De Rupee, Expat (Makfi) and Icebath (Sacred Falls) – over 1080 metres at Randwick on July 26.

As Forbidden Love begins her campaign, Vinery Stud is hopeful she can also help continue the emergence of her sire All Too Hard (Casino Prince).

The 13-year-old, who’s now had six crops do his bidding, continued his upward trajectory in 2021-22. His past four finishes on Australia’s general sires table have been 20th, 16th, 10th and now ninth.

All Too Hard had 122 winners from 289 Australian starters last season, with three stakes winners for a global career total of 22, a figure including two each in New Zealand and South Africa as well as a stakes winner in Singapore.

His progeny’s efforts prompted a second straight fee rise, though a modest one, from $33,000 (all fees inc GST) to $38,500. After the fee had dwindled from an initial $66,000 in 2013 to $27,500 in 2019, Vinery said the quadruple Group 1 winner still represents immense value for money, especially with his recent upswing backing the view that both stallion and progeny grow better with age.

“We were very pleased with his season,” Vinery’s nominations and sales manager Adam White said. “He’s been consistently around the top ten for the last few years. That’s all well and good but you’ve got to get the winners at the highest level. For him to have four Group 1 winners in 12 months is an extremely good effort for a horse standing for less than $50,000.

“Generally, though he has had pre-Christmas winning two-year-olds, his stock do take a little bit of time. It took a while for trainers to work that out because as a breed, they have great temperaments, which may have indicated to trainers they were ready when they probably weren’t.

“I think trainers have learnt that, now the crops have started coming through. Given time, they can get to that good level, and they’re racing at up to six and seven at a good level.

“So we believe All Too Hard is really good value. Proven horses under $50,000 are extremely hard to find, but he’s one of them. He’s affordable for breeders, and with what he’s doing in Asia, you can get a good result in the sale ring.”

White said All Too Hard was set to cover between 150-180 mares this spring, having served 153 last year. He covered a career-low 109 in 2019, his crop that are now two-year-olds, which leapt to a career-high 191 in 2020 sparked by the emergence of Behemoth and Alligator Blood.

Meanwhile, syndicators Australian Bloodstock and their main trainer Kris Lees hold a strong numerical hand in the Missile with four of the 12 starters in Gem Song (Your Song), Special Reward (Demerit), Wandabaa (Wandjina) and Enchanted Heart (Shamus Award), though all are at $17 or longer.

The two mares, Wandabaa and Enchanted Heart, will be offered for sale in a bespoke Inglis Digital auction from August 16-17, along with their stakes-placed stablemate Lunakorn (Puissance De Lune).