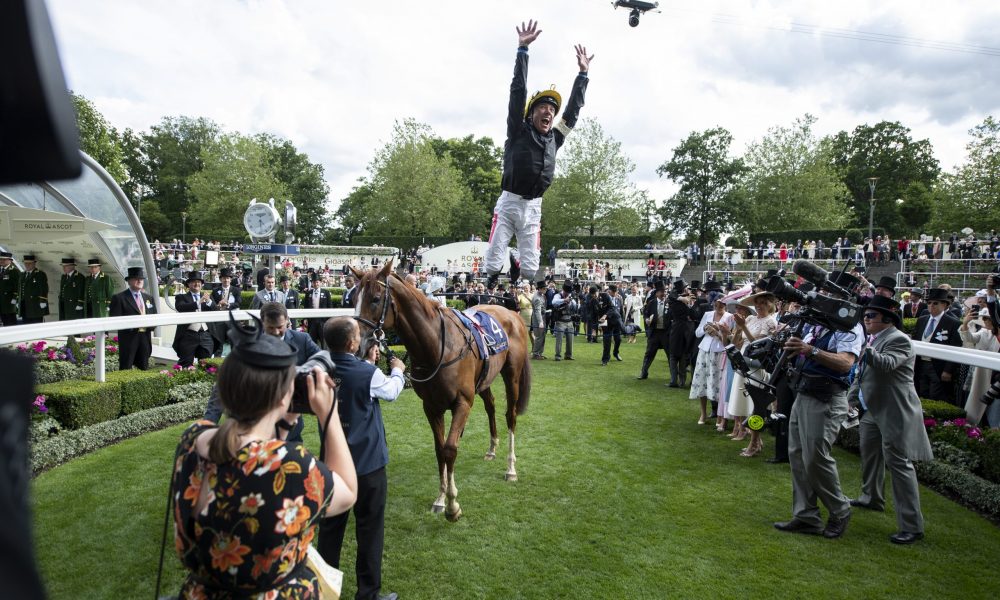 Frankie Dettori turns 50 on December 15 this year. He must surely be the world’s best sportsman of that age.

Certainly the best in a sport which demands strength, balance, skill and bravery. A sport which is physically demanding.

Who could rival him? Kelly Slater perhaps? But Slater is almost two years younger and while still competing extremely well against all-comers, it is nine years since he won a World Surfing Title.

He’s older than Bernard Hopkins, who at 48, is the oldest world champion in boxing history. Older than Arthur Wheeler, the Briton who was 46 years and 70 days old when he won a motorcycle major in Argentina in 1962.

Dettori is even older than the oldest major championship winner in the more genteel and less demanding pursuit of golf. Julius Boros won the 1968 PGA Championship at 48 years.

OK, he’s not as old as Glen Boss (21-08-1969) who’s had a remarkable racing year with four Group 1 wins plus a $14 million Everest and a $7.5 million Golden Eagle, but from a global perspective I fancy Dettori’s six at Royal Ascot eclipses the Australian’s stellar year (not that Boss would be swapping pay cheques).

And yes, he’s a mere babe compared to Robert Thompson (13-05-1958) who is, of course, still competing and claimed the 2008 ATC Oaks just a month shy of his 50th birthday so he has the distinction of being older than Dettori when he won that Group 1 but, of course, he doesn’t have the international stature of the Italo/Anglo superstar.

Thompson has ridden a staggering 4443 winners – an Australian record bettering, long ago, the 3322 mark set by Jack Thompson (no relation) who was champion jockey in Ireland in 1950.

Dettori is not (yet) the oldest jockey to ride a major winner. Luminaries Lester Piggott won at Royal Ascot at 57 and Bill Shoemaker took out the Kentucky Derby at 54 but last week’s star of the show is anything but in decline – his winning rides, in particular, aboard Alpine Spirit (Sea The Moon) and Palace Pier (Kingman) were displays of great aplomb.

What a week he enjoyed. Dettori’s first Royal Ascot winner came in the meeting’s first race, the Queen Anne Stakes, in 1990. His 70th, Fanny Logan (Sea The Stars) in the Group 2 Hardwicke Stakes, came 30 years to the day later on (last) Friday.

Then a treble, on Saturday, took his tally to 73 which matches Pat Eddery’s Royal meeting tally and trails only Piggot (116). The trio included the Group 1 Coronation Stakes which had previously eluded him. He’s now won each of the meeting’s major races.

Dettori is the recognisable face of world racing. If he’s not, then we don’t have one.

God bless reigning champion jockey Oisin Murphy (06-09-1995) for his well documented and positive social media engagement with fans and he may eventually be as warmly embraced as Dettori, but not yet.

From a racing perspective, Dettori’s image is largely untarnished despite his six months ban – imposed in December 2012 – after being found guilty of taking a prohibited substance. The ardent punters rally to him, the casual fans love him and the wider public sure as hell knows who he is.

Dettori said he’d conquered Royal Ascot after the momentous week. He certainly ‘owned it’ after overhauling Jim Crowley (14-07-1978 for the record) in the race for most winners. (Crowley just might be the best judge, as far as I can tell from the other side of the world, of the British jockeys. When he jumps off one to ride another, the one seemingly never wins).

Dettori even overshadowed the third time Gold Cup winner Stradivarius (Sea The Stars) whom he rode. Noble beast he is Stradivarius but, in any given year, there’s very few horses capable of sustaining a gallop for the 4000 metres of the Gold Cup. The competition is limited. This point was sagely made by ITV pundit and former jockey Jason Weaver.

Weaver’s contribution to the TV coverage of Royal Ascot was excellent. He was the only on-air pundit to “kick up” for the Karl Burke trained Dandalla (Dandy Man) in the Albany Stakes. She won by six lengths….at very backable odds of 17/2.

More importantly, he was the one person prepared to “call out” the Ballydoyle tactics in the St James’s Palace Stakes which – regardless of intent and whether they were or were not – looked horrible. I’m not so concerned to judge this race in particular – I haven’t seen the head on footage and nor do I know how the horses pulled up –  but it didn’t look good and it does raise a broader issue which centres on positive image.

Image is everything. Goodness me, we’re living in a world where masses of people are prepared to jeopardise their own health and that of others by participating in demonstrations against matters which are fuelled by the images broadcast around the world.

There was a lukewarm questioning, from what you can gather from the stewards report, of Tom Marquand after he rode the tailed off 50/1 Ballydoyle runner Royal Dornoch in the St James’s Palace Stakes. But that’s not the point.

The point is the BHA ought to be more stringent in their policing of “team tactics” from any stable and, as is the case in Australia, demand the notification of tactics changes.

Furthermore, if they want to promote transparency and a positive image for racing, they should demand that tactics are revealed from any stable with multiple runners in a race.

The change of tactics notifications in Australia are not always helpful and, sometimes, they just don’t go as announced because of the vagaries of racing. But they are always transparent and, occasionally, incredibly helpful from a punter’s point of view.

WHIP HAS TO BE BANNED

While focusing on image, it is time for the whip to be banned which prominent owner Lloyd Williams again endorsed last week. Any rule based on a permissible number of strikes is simply nonsense and a time bomb waiting to explode, one of these days, in a Melbourne Cup or an Everest.

There’s been several controversial incidents, of late, in Australia including one rider transgressing aboard a dead-heater who should, logically you’d think, have lost the race if the whip has any bearing on the performance of a horse. If it has no bearing then there’s simply no argument about banning it.

If the argument is that they respond to the sound given that the padded whips don’t hurt, then that’s just as silly. Mimic the sound.

There is no compelling argument, with the possible exception of rider safety, for it’s retention. If that’s real then surely the answer is simple. A jockey may carry a whip but it may only be used in extreme circumstances to ensure the rider’s safety and simply not, at any stage, for encouragement.

To argue that it has a bearing in that some horses won’t try as hard or run as fast is as nonsensical as counting the strikes. They’ll all be on the same playing field. Some horses don’t run as fast if the ground is too soft or too firm, if they draw too low or too high, if the weather’s too hot or too cold, if the pace is too slow or too fast, if the jockey is male or female, if the float trip is too long or too short.

Horse racing will not flounder without the whip but the sport and its image may flourish.

I thoroughly enjoyed ITV’s coverage of Royal Ascot and if the Brits can learn from us about tactics notifications and some other issues, then Australian racing TV could take some heed from the very “cosy jumper” coverage of horse racing. It has to be about more than just the punt (as much as I love the punt).

I don’t know Ed Chamberlin but he appears to be a likeable fellow. I do know he is a very genial host who hosts – just as he is paid to do. He doesn’t dominate the coverage. Doesn’t promote unnecessary gush. Francesca Cumani has appeal to a broad audience. Jason Weaver makes very good observations on occasions.

Vignettes from Oli Bell, Mick Fitzgerald, Luke Harvey and Kevin Blake are easily digested. It seems nobody’s trying to appear to be smarter than the next bloke or befuddle the audience with meaningless contemporary jargon.

Nobody’s shouting at me. Well, with the exception of Matt Chapman from time to time. But even Dear Matt, aside from the forced affectation of delivery, seems to have pulled his head in a touch and – like him or not – his post–race interviews are excellent.

Perhaps there could be a touch more sophisticated analysis in terms of the form but not as much as we have here which appeals to such a minute part of the audience.

But what I loved most of all was the interview – which the ITV crew seemed to have forgotten – with Clive Cox who practically tipped Nando Parrado to win the Coventry. And he did win it and he was 150/1 and, yes, I did have a couple of dollars on him.