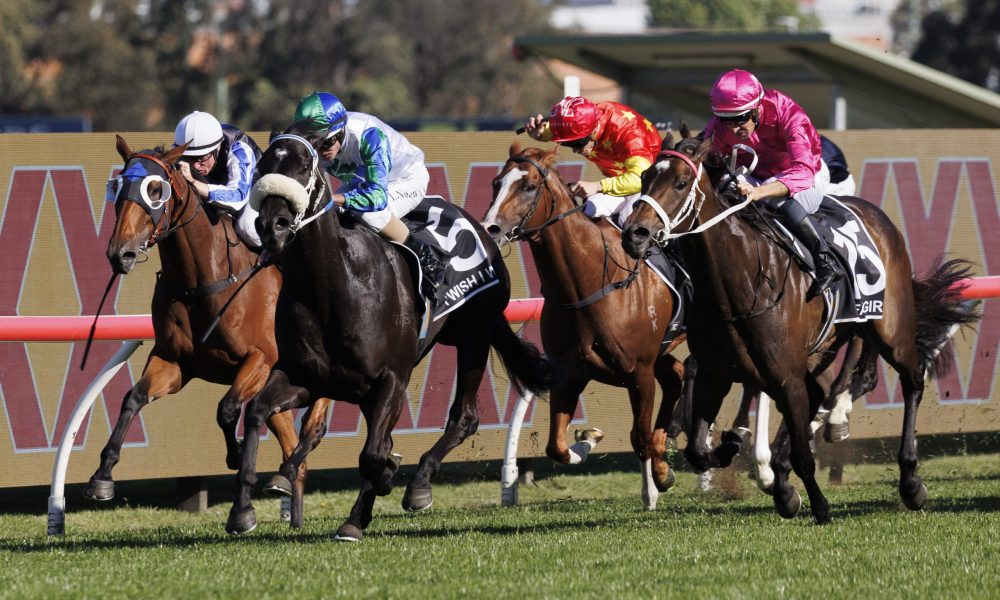 Eight-time Champion New Zealand Sire, Savabeel enjoyed yet another day in the sun, siring his all-time greatest stake earner when I Wish I Win grimly held on to score in the rich Golden Eagle (1500m) at Rosehill.

Neither race qualifies as a black-type race, a situation that is looking quite odd when we are used to time-honoured races being the high value races. Nevertheless, the huge money being offered is not only altering the industry, it is also driving the industry. Who doesn’t want to direct five or six million into their racing account?

For the purists, the change in emphasis has been dramatic and rapid. First, it was The Everest which has arguably become as much a focus of spring racing as Melbourne’s big three, the Caulfield Cup (Gr 1, 2400m), the Cox Plate (Gr 1, 2040m) and the Melbourne Cup (Gr 1, 3200m). The Everest has been run just six times, altering the spring landscape dramatically.

Melbourne racing in the spring is and always has been outstanding and will, no doubt, continue to be. However, from the sidelines, the apparent squabble between the two eastern states looks like a simple case of one-upmanship and maybe even envy.

When a first-class industry administrator such as John Messara is brought in to sort things out then quickly washes his hands of the squabble, you know that there lies some deep issues.

This raft of big money races (fabulous for racing and its owners) skews the sire listings which are based on earnings. Are earnings the real measure of a stallion? Some would argue it is not.

Perhaps Australia’s Pattern Committee needs to assemble and discuss this situation. Without diminishing the excitement that The Everest has created, the powers that be need to get their heads together and address the anomalies that such races have caused.

The tough Golden Eagle win by I Wish I Win is a story of Mother Nature and her incredible powers of overcoming adversity. The published picture of his badly turned out, crooked near-fore, taken as a foal, is simply remarkable from the viewpoint that he was even persevered with let alone made it to the races. His name almost says it all. At that point in time it was predominantly wishing. He could just as easily have been named Against All Odds or Not A Chance.

A notch below his own age group at two and three in New Zealand, I Wish I Win crashed the Melbourne scene in late August with an impressive win at Caulfield then made a bigger impression when taking out the Testa Rossa Stakes (Listed, 1300m) at Sandown four weeks later, resulting in his being made favourite for the Toorak Handicap (Gr 1, 1600m).

His fifth in the feature Group 1 was sound but far from his spectacular Testa Rossa win. He was backed out of the barrier after getting his hind leg caught up but after inspection was allowed to run, where he made a big move from well back but was not able to stretch out in the softer conditions.

“We thought he was a real chance in the Toorak at his last start,” said winning rider Luke Nolan. “He probably didn’t get track conditions quite to suit. Today we blended into the race really quickly – it sort of took me by surprise, and then he floated around and let the second horse into the race a bit, but he was really good.”

“Great thrill. Congratulations to the team at Waikato Stud,” said trainer and co-owner Peter Moody. “We had faith in this horse and people thought he was disappointing in the Toorak, but the track just didn’t suit him that day. Luke gave him a gun run today, presented him at the right time and got the job done.

“This is the second richest turf race in the world. We’ll take it! It’s tremendous, it’s been a great thrill and a great ride. To Mark and Pippa and the team back at Waikato, congratulations. That’s tremendous, and thanks for inviting me to be a part of this horse.”

Mother Nature prevailed. Waikato Stud could never have offered him for sale and hid him away to let nature take its course. The stud maintained their integrity and have been rewarded handsomely for their faith and belief. The perfect horse, conformation-wise, does not exist and I Wish I Win might cause buyers to be more forgiving in their critiquing.

Family-wise, I Wish I Win’s female line is very topical. He is one of two stakes winners from his twice–winning dam, Make A Wish (Pins). The other is Group 3 winner Another Dollar (Ocean Park). Make A Wish’s three-quarter sister is Ampin (Pins), the dam of last year’s Livamol Classic (Gr 1, 2040m) winner Savy Yong Blonk, who is also daughter of Savabeel. One might describe I Wish I Win and Savy Yong Blonk as seven-eighths brother and sister?

Savabeel is represented by 11 two-year-olds at the upcoming Ready To Run Sale.

From the same race, with a short four year history, of which three editions have fallen to Kiwi-breds, Gypsy Goddess (Tarzino) put up a terrific performance for third. After sitting midfield (two out) past the 600 metres, she improved to share fifth starting the run home, drove through along the fence at the 250 metres and was third at the 100 metres. She kept on strongly to pick up $1million, her biggest cheque yet.

Ten lots by Tarzino (Tavistock) are on offer later this month.

If ever there was a mare deserving of bold caps black-type it is Icebath (Sacred Falls), who made her maiden stakes win the Empire Rose Stakes (Gr 1, 1600m).

Five-times Group 1 placed, Icebath lined up in Flemington’s feature mares’ race as a stakes-placed winner of $4.6 million. Her biggest cheque, $1.5 million, is from finishing an unlucky second in the 2020 Golden Eagle behind Collette (Hallowed Crown).

Her $600,000 from the Empire Rose victory isn’t her biggest winning cheque either. That was $1 million gained from her win in the non-stakes The Invitation (1400m) a year ago.

Although well back turning for home, Craig Williams saved ground along the inner and the mare hit the front at the 100 metres and was a convincing long neck winner, her fifth win to go along with 16 placings in 38 starts, not forgetting her stash of $5.2 million.

She is one of six stakes winners by Waikato Stud’s Sacred Falls (O’Reilly) whose stud career was cut down in 2019 after less than four full seasons. His final crop are two-year-olds and seven will be offered later this month at NZB’s Ready To Run Sale.

Icebath is one of three stakes winners from her dam Fabulist (Savabeel), who is five from five re winners. Her first stakes winner was Nowyousee (O’Reilly), a Listed winner in Singapore. Icebath is her second and the mare’s baby brother, Courier Wonder (Sacred Falls) is five from ten in Hong Kong and a Group 3 winner there as well as Group 1 placed. Fabulist, a five-times winner, including in Melbourne and Adelaide, is certainly doing her job and has foaled two younger, yet to be named, sisters to Icebath.

Fabulist’s dam, Fontaine (Centaine) produced just two foals after winning three and placing in the Desert Gold Stakes (Gr 3, 1600m). The next dam, Water Garden (Bellwater) won three metropolitan races in Melbourne and Adelaide and ranks as a half-sister to Melbourne Listed winner Eccentricity (Noalcaholic) and to the dam of leading two-year-old filly of 2004, Kapsdan (Kaapstad).

Victoria Derby victor Manzoice (Almanzor) is not New Zealand-bred. Because his dam was exported to Australia in 2019, he is officially Australian-bred but it is doubtful whether Cambridge Stud, southern home to his sire Almanzor, are all that concerned. Being conceived in New Zealand will be quite sufficient, thank you.

The lightly raced colt caused a mild surprise in taking out his second win in six starts. His maiden win, at his second start, took place at Rosehill over 1300 metres mid-August. However, he ran out the 2500 metres well and won clearly enough, getting the better of favourite Sharp ‘N’ Smart (Redwood) short of the line.

Manzoice had raced against Sharp ‘N’ Smart the previous week, both backing up from the Spring Champion Stakes (Gr 1, 2000m) seven days prior. Whereas Sharp ‘N’ Smart bravely got the win at Randwick, Manzoice finished a fair eighth, four and half lengths from the winner.

Charlie Duckworth, representing winning trainer Chris Waller, explained that the Derby had been the plan all along.“Things haven’t gone his way with wide draws and wet tracks,” he said. “He knuckled down really well in the last 100 metres.”

James McDonald, a regular rider for Waller, opted to ride the Graeme Rogerson-trained favourite, the winning mount going instead to Michael Dee who commented: “Walking around in the yard I thought he’s certainly a Derby horse. He’s just so calm, got such a big stride on him and it’s all panned out. He was very strong.”

For Almanzor, Manzoice is his second southern hemisphere stakes winner, the first being Karaka Million (RL, 1200m) winner Dynastic, from the same 2019 crop. In the northern hemisphere he has been represented by four further black-type winners, most recently (October 19) by Rajapour, a Listed winner at Deauville. Six Almanzors are catalogued in the Ready To Run Sale.

Manzoice’s two-year-old half-sister by Shooting To Win (Northern Meteor) is catalogued as Lot 57 later this month at the Ready To Run Sale, a sale dominated by males. With sudden residual value, the filly will clearly attract great interest after a serious family update.

Their dam, Choice (Mastercraftsman), retired with three wins including the Eulogy Stakes (Gr 3, 1600m) plus two two Listed placings and was tried briefly in Melbourne, the first of her four Tasman crossings.

Her first foal, born in 2017 is the winner Regal Ruby (Night Of Thunder) who was conceived in Australia yet foaled in New Zealand. The mare produced a colt by Iffraaj (Zafonic) the following year, then, covered by Almanzor, produced Manzoice in Australia. He fetched $340,000 at the 2021 Magic Millions Gold Coast Yearling Sale. In 2020 she produced Lot 57 and was covered by Too Darn Hot (Dubawi), the resultant filly born here in New Zealand last spring and foaled a sister to Manzoice an hour before his Derby victory.

Choice, passed in at 2013 NZB Karaka Select Yearling Sale, is the only winner from her dam Femme Britannia (Encosta De Lago), the latter sold as a $360,000 yearling at Karaka in 2006 and was purchased by Manzoice’s breeder, Stephanie Hole, for $95,000 at the 2008 Inglis Easter Broodmare Sale.

Gildoran’s dam, Durtal (Lyphard) was the Champion English Two-Year-Old of her crop, herself a half-sister to Champion French filly Detroit (Riverman). Another half-sister is Valderna (Val De Loir), grandam of the incomparable Zabeel (Sir Tristram).