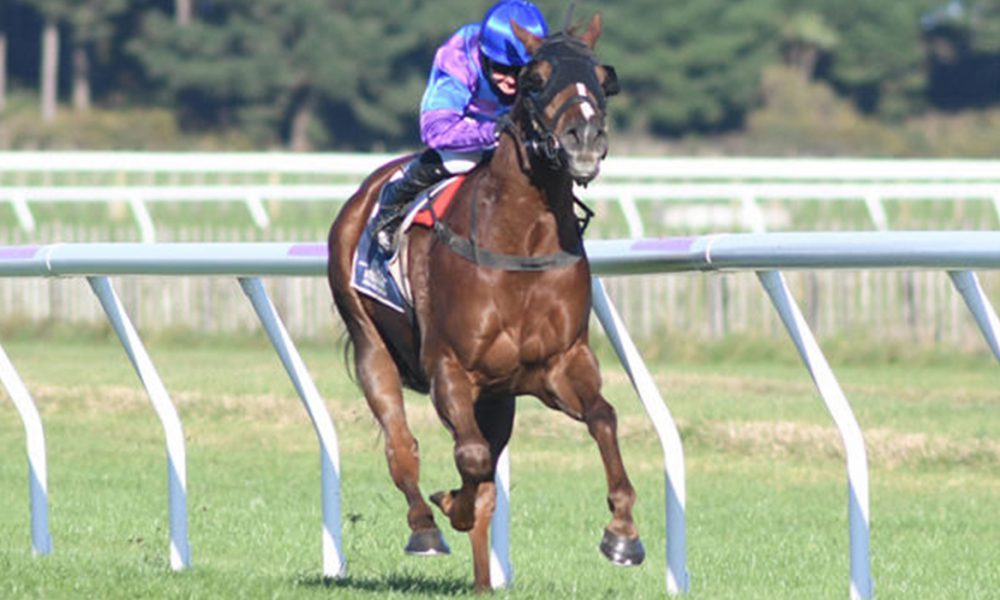 All thoroughbreds have a mother and one in particular, Mrs Moss (Reform), continues to influence the bloodstock breeding world.

Described by Henrietta, Duchess of Bedford, of Bloomsbury Stud, as a “life changer”, Mrs Moss found her way into the Tavistock-Woburn Abbey empire for the princely sum of 2100 guineas in 1975 as a broodmare carrying her third foal.

“Mrs Moss was a little chestnut with a very pretty face,” said Henrietta, when Kiwi Chronicles contacted her for the back story. “What made me buy her, I will never know. I remember looking at her pedigree page and seeing Whistler but I have no recollection after that. I had only one bid and the hammer fell.”

“Later, I discovered that she had been owned by Sir William Pigott-Brown who had lost her in a gambling debt. She was the winner of one race (at Chester), ridden by Lester Piggott,” continued Henrietta, “but I didn’t know she had a club foot.”

Apart from her most obvious descendant, Tavistock (Montjeu), who is front and centre as the sire or grandsire of three recent Derby or Oaks winners, another line through her daughter Pushy (Sharpen Up) added to the family’s fortunes when Amusez Moi (Dalghar) scored a comprehensive win in the AGC Training Stakes (Listed, 1650m), the feature race at Waverley on Saturday.

Amusez Moi began his race career in New Zealand but also raced for two seasons in Australia, racking up a total of four wins before heading back home. In five starts from his new base at Otaki the five-year-old has been in consistent form, with two wins and two seconds, plus a fair sixth at Listed level in the Anzac Mile (1550m).

The AGC Training Stakes was his maiden stakes win, the result of a clever ride by Lisa Allpress who hugged the fence rounding into the straight before shooting the gelding three lengths clear. To the line they were never in danger of defeat.

His dam, Next (In The Wings), started her stud career after winning her maiden in France, visiting Cape Cross (Green Desert) and Oasis Dream (Green Desert) to produce two winners. On her way to New Zealand she foaled a colt to Exceed And Excel (Danehill) in Australia then was on another plane to Bloomsbury Stud in Matamata where her first New Zealand foal (2016) was Amusez Moi.

In 2017 she foaled Montre Moi (Showcasing) who won twice from the same stable as Amusez Moi and finished a good third in the 2021 Karaka Million 3YO Classic (RL, 1600m) before his sale to Hong Kong. Her 2018 foal, Bond Street Beau (Turn Me Loose), placed third in the Tasmanian Guineas (Listed, 1600m) in January.

Next ranks as a three-quarter sister to Zipping Classic (Gr 2, 2400m) winner Au Revoir (Singspiel) and also half-sister to three Listed winners. “Next gets better with age,” added Henrietta. “She had some issues earlier but she looks fantastic. She is in foal to Savile Row and I sold her Embellish colt last year. He is with Johno Benner and Hollie Wynyard who trained Montre Moi. They have Amusez Moi too.”

Her dam, First (Highest Honor), is one of three stakes winners from Pushy, herself a Royal Ascot winner of the Queen Mary Stakes (Gr 2, 5f) although Pushy’s best foal was Bluebook (Secretariat) whose three wins were all at Group 3 level including the Princess Margaret Stakes (6f) at Ascot.

Henrietta takes up the story: “When I sent Pushy for a date with Highest Honor, Alec Head said that the mare was the best the stallion had ever had. The result was First who later sold for £1 million and the underbidder was the Aga Khan.”

Cresta Run’s grandson, Classic-placed Gold Nib (Dastur), also made quite an impression at stud in New Zealand as the five-time leading sire of two-year-olds.

Gold Nib was one of the better colts of his crop, finishing third behind the champion filly Sun Chariot (Hyperion) in the Middle Park Stakes (Gr 1, 6f) at two. At three he ran third in the English 2,000 Guineas (Gr 1, 1m) behind another champion, Big Game (Bahram).

Gold Nib’s half-sister Gold Rush (Gold Bridge) is the fifth dam of Mrs Moss and it is this branch of the family that is the most successful.

Her most noteworthy performer was Jupiter Island (St Paddy), a warrior who put together 14 wins including the Japan Cup (Gr 1, 2400m) and who scored five Group victories in England and France, and was also Group 1 placed in the US.

In her coffee table book commemorating the life and times of Tavistock, Henrietta Bedford suggests that convincing the owner of Klairessa (Klairon) to send the mare to Pieces Of Eight (Relic), producing the fabulous broodmare Eight Carat, is her proudest bloodstock accomplishment.

Considering the success of, and largely overseeing, Mrs Moss’s immediate produce and many of her descendants, a comparison is a tough call. In less than 50 years there have been 33 stakes winners (15 at Group level) and a further 27 black–type performers with a direct distaff connection to Mrs Moss.

The Pedestal line may have another black–type performer to add to the family in the near future. Per Inaway (Per Incanto), from Tavistock’s half-sister Inertia (Danasinga), was convincing on her Australian debut in a Benchmark 78 Handicap (1200m) at Rosehill on Saturday.

Inertia was sold as a yearling but Henrietta bought her back at the Inglis Melbourne Broodmare Sale in 2014. From nine foals to race, eight are winners. Her two-year-old, Elcheikhali (Sweynesse), with Lisa Latta, was fourth on debut, her only start to date.

Per Inaway left New Zealand as the winner of two of her four starts and had placed in the other two. She is a smart filly and it will be no surprise to see her pick up black type.

Many column inches have been devoted to Tavistock in this column recently. The reason is simply due to results, which continued again this week.

Keeping things in perspective is the purview of Westbury Stud’s Russell Warwick. Even though Tavistock’s son Tarzino is emerging as a serious player among the New Zealand sire ranks, Warwick is remaining objective. “We don’t want to get too far ahead of ourselves. It’s only his first crop but you feel very satisfied that, going forward, he’s going to make his mark. Two Group 1 winners in his first crop puts him in very good standing.”

Great wisdom from Warwick who has 30 plus years with Westbury and therefore understands, all too well, that early results, while more than encouraging, are just that – early results.

Then there is Tarzino’s daughter Gypsy Goddess, whose trainer, David Vandyke, is still in awe of the filly. In October of last year he would have been surprised if she won a maiden race. “Seven-and-a-half months ago she won her maiden, which I didn’t even think she could do. Now, it’s been a journey, such an arduous time, and to see her wrap up a field of quality fillies like that, at Group 1 level in our home state, that’ll do me.”

She performed far ahead of Vandyke’s original thoughts winning her first four outings, ending her first preparation with victory in the Grand Prix Stakes (Gr 3, 2100m).

A short spell saw her return for win five in an open 1600–metre race at Eagle Farm, her prelude before heading to New South Wales and a look at two Group 1s. Her unbeaten record was undone by heavy tracks yet she still managed a third in the Vinery Stakes (1850m) then second in the Australian Oaks (2400m), giving her best in the testing conditions.

Back home, she left her run too late in the Gold Coast Bracelet (Listed, 1800m), again on a heavy track, before her commanding win in Saturday’s Queensland Oaks (Gr 1, 2400m), her sixth win in just nine starts.

It is fair to suggest that the reason Gypsy Goddess was not in great demand as a yearling was due to Tarzino, who fell into the “wait and see” category with his first crop.

Apart from that, she has a really nice family behind her starting with her dam being a sister to Flight Stakes (Gr 1, 1600m) winner Cheeky Choice (Redoute’s Choice).

Deeper in the family is three-year-old Classic form, namely Listed winner Danasia (Danehill), who finished third in the New Zealand Oaks (Gr 1, 2400m), and Group 3 winner Scratchy Bottom (Sebring), who ran second in the South Australian Derby (Gr 1, 2500m). There are no prizes for being wise after the fact.

Family of the year?

If there was an award for Family Of The Year, that award would have been sewn up by Island Doy (Doyoun) following the impressive maiden stakes victory by Sophmaze (Derryn) in Saturday’s Castletown Stakes (Listed, 1200m), her third stakes winner this season.

Sophmaze was slowly away to settle third last (wide) and although closer to the lead, she was still third last at the 600 metres. Lisa Allpress took her wider into the straight, balanced, and then began their chase. Fifth at the 200 metres, Sophmaze was travelling well, hauled in the leaders at the 100 metres and then drew away by two and quarter lengths to take her record to two wins and two thirds in four starts.

Winning trainer Allan Sharrock had anticipated a good showing from the filly. “I said during the week I hadn’t seen a filly improve as much as she has since that Trentham win. She was suffering with her shins for her first two starts, but she was right at Trentham, and today she has taken another big step in good style. She came from quite a tricky position in the running to dash away from them so there is plenty to look forward to with her,” said Sharrock.

Sophmaze will likely step out late next month, “She can have a week off now and then we will get her ready for the Ryder Stakes,” continued Sharrock. “She is such a versatile customer and she handles most track conditions so I think she can feature in some of those early three-year-old races in the spring. She will definitely get up to a mile as a three-year-old so a race like the Eulogy Stakes later in the year is also a target we will look at.”

Arguably the hottest family in the New Zealand Stud Book, Island Doy is, as mentioned, responsible for three stakes winners in the current season, namely her own daughter, Levante (Proisir) plus granddaughters Maven Belle (Burgundy) and Sophmaze.

For winning sire Derryn (Hinchinbrook), the race saw some bonus black type in the shape of third placed Channel Surfer making it a banner day for the young stallion. Both represent Derryn’s first crop, Grangewilliam Stud’s Mark Corcoran describing the result as being massive for the farm.

Only against the best

Eighteen of Derryn’s 20 starts were in black–type races. He competed against the best throughout his three–season career which also suggests that he remained sound, a much sought after commodity when deciding a mating.

A Group 2 winner of the Arrowfield Stakes at Randwick at three, he also won the Listed Darby Munro Stakes (1200m) at Rosehill while his premier placed performance was when running third behind the flying Redzel (Snitzel) in the Doomben Ten Thousand (Gr 1, 1200m).

His sire Hinchinbrook was lost to the bloodstock industry in 2018 after tragically breaking a leg. From six crops (his last are rising four-year-olds) he has sired 22 stakes winners, 30 other black–type performers (with more to come) and has a very high winners-to-runners ratio of 69 per cent.

Beautifully bred, Hinchinbrook ranked as a half-brother to champion sire Snitzel (Redoute’s Choice) and was also bred on an identical pattern to Snitzel, both being grandsons of Danehill.

Derryn, too, represents a respected sire family. His third dam is a Listed-winning half-sister to the influential sire Snippets (Lunchtime) and also to Singles Bar (Rory’s Jester), the dam of leading sire Not A Single Doubt (Redoute’s Choice). For good measure, Hinchinbrook is out of a mare by Snippets.