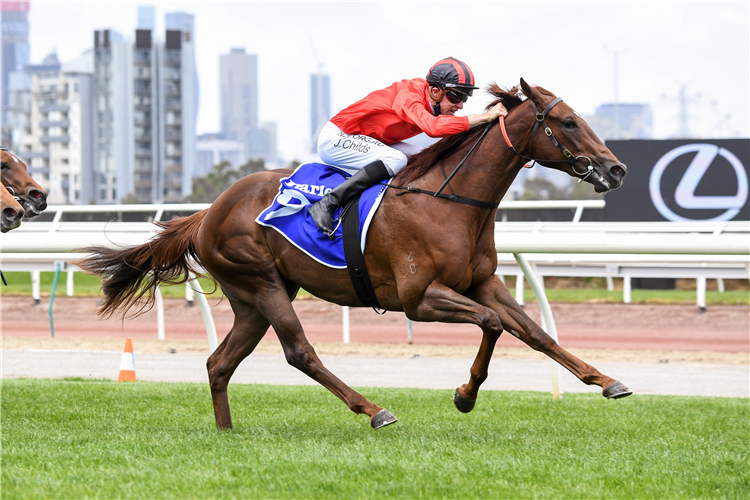 There was a dash of irony in the powerfully-built Dosh winning the fillies’ Blue Diamond Preview at Caulfield on Tuesday. In leading throughout for a superb fighting victory, the hulking filly brought more success to a stud that’s prospered since deciding bigger is not always better.

A bold decision by Queensland breeding byword Glenlogan Park three years ago to ship out its stallions and slash its broodmare band by two-thirds paid off handsomely – almost spectacularly – on one of Australia’s most tantalising days for two-year-olds.

Not only did Dosh take the fillies’ event, 35 minutes earlier Extreme Warrior had come within half a length of providing Glenlogan with the Blue Diamond Previews double, racing wide but running on for a very meritorious second to General Beau in the colts’ division.

Dosh and Extreme Warrior are part of the initial crop of Glenlogan products bred since the south-east Queensland farm – famed for breeding Savabeel among a list of Group 1 winners – undertook a major change of tack in 2018, inspired in part by the difficulties of gaining traction from up north in the Hunter Valley-dominated national stallion scene.

“We made the decision to stop standing stallions and come down to a boutique number of high-end broodmares, and really concentrate on trying to breed these top-end yearlings and racehorses,” Glenlogan’s general manager Steve Morley told It’s In The Blood.

“The current crop of two-year-olds is the first that’s a result of that decision, and so to have a couple of horses off the farm now being high in the discussions for a Blue Diamond is very encouraging, and something we’re very proud of.”

One early move around the time of the transition was to put the Danehill-line mare Raise Up to the relatively new and unproven Rich Enuff. The stakes-winning, Caulfield Guineas-placed stallion had mixed his time between co-owners Glenlogan and Woodside Park Stud, but would now stand solely at the Victorian farm, alongside his sire, Written Tycoon.

Raise Up, a speedy and sizeable multiple city winner in Brisbane, had thrown two colts who would reach no great heights – the latter, Sunlander, by Glenlogan’s Real Saga, claimed a Brisbane city maiden. But when the filly by Rich Enuff appeared – an early drop, foaled on August 9, 2018 – this mating was quickly shown to be a resounding choice.

Dosh was a large yearling, well-proportioned, and a smooth mover. Trainer Grahame Begg went to $155,000 to secure her, and now has one of the favourites for the Blue Diamond. Her Preview success followed another Group 3 victory on debut in the Ottawa Stakes up the Flemington straight on Oaks Day.

“Raise Up was a very talented racemare herself, but there’s no question this filly Dosh was her stand-out foal,” Morley said.

“Right from the time she was born she was very athletic. She’s very big but has a lot of athleticism. She was on everybody’s radar at the sales because of the way she looked and the way she handled herself, and I’m really thrilled for Grahame Begg, who was determined to take her home when he first saw her at the sale last year.

“We’ve always supported Rich Enuff strongly. We knew he had a great affiliation with Danehill-line mares, and with Raise Up being by Shovhog it was a natural choice. It was a nice mating genetically and physically. Raise Up is also a big mare, but very athletic, and she leaves that muscle and bone structure and frame in her offspring.”

For all that, however, Raise Up has a patchy record of conception. She threw Dosh, then missed, then threw a sister to Dosh before missing again last spring.

“We have found it a bit hard to get her in foal when she’s got a foal at foot. but if she keeps throwing them with the talent of Dosh, I don’t mind getting them every second year,” Morley said. “We’ve got the full sister at foot at the moment, and she’s almost a mirror image of Dosh, so there’s a bit of cause for excitement there.”

While Dosh made it two Group 3 wins from two starts on Tuesday, Extreme Warrior completed two Listed second placings at his second start, both at Caulfield.

The colt was bought for $160,000 by Mick Price and Dermot Farrington at last year’s Magic Millions Gold Coast Yearling Sale, after Morley had two years earlier swooped to buy the dam, Heart Of Thrills, in foal to Price’s 2016 Blue Diamond winner Extreme Choice for $200,000 at the Inglis Australian Broodmare Sale.

While Morley may not have designed Extreme Warrior’s conception, aside from refining his broodmare band there was perhaps extra incentive to buying Heart Of Thrills, who herself boasted only a Wagga maiden win from four starts, as she is by one of Glenlogan’s favourite sons in Show A Heart.

Now 23, four-time Group 1 winner Show A Heart enjoys the quiet life on the farm these days alongside another Queensland favourite, Falvelon, 24, who was also retired from stud duties in Glenlogan’s 2018 recalibration.

At the same time, Show A Heart continues to perform as a broodmare sire. He sits 29th on the Australian table for this season with a more than healthy 55 winners from 149 runners, headed by Sovereign Award – a dual Group 3 winner in Melbourne last spring – and with more promise held by Extreme Warrior.

He also has something which, while once everywhere, is now increasingly rare – a Star Kingdom sireline (through Brave Warrior-Cossack Warrior-Bletchingly-Biscay) – that Morley believes mixes well with Danehill-descended sires like Extreme Choice (Not A Single Doubt-Redoute’s Choice).

“Show A Heart is doing a really good job as a broodmare sire for the opportunities afforded to him,” Morley said. “Being a Star Kingdom-line stallion, and probably the last of the commercial Star Kingdom-line stallions, he’s had a real affiliation with this Northern Dancer-line of stallions right across the board. Physically he also suits because he’s got plenty of length and a great hip and tail, and that can often suit these Danehill line horses.”

Heart Of Thrills’ broodmare credentials are also supported by her other named foal, the stakes-placed four-year-old mare Free Thrills (Unencumbered). And there’s still more excitement at Glenlogan over what Morley describes as a “beautiful” yearling filly, who’ll be offered at the Inglis Australian Easter Yearling Sale, by no less a heavyweight than I Am Invincible.

“Heart Of Thrills has had three foals to the track for three black-type horses, so she’s really performing,” Morley said of his 11-year-old, who is now in foal to Written Tycoon.

With two live Blue Diamond chances, and with eight lots also to be put up at the Inglis Classic Yearling Sale two weeks before that race, it’s fair to say the upswing from Glenlogan’s downsizing is looking very promising indeed.