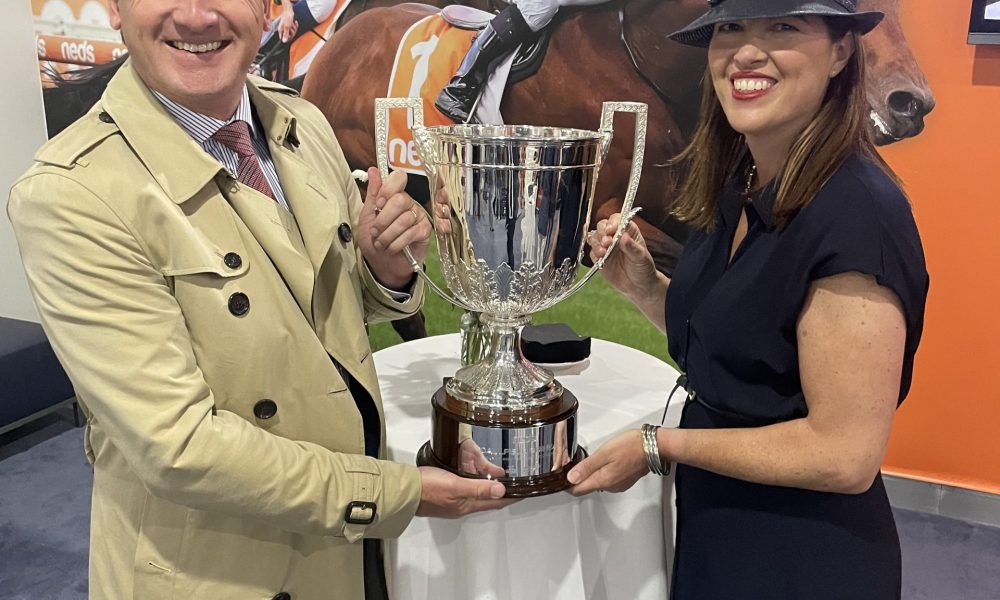 When Golden Mile (Astern) crossed the line in the three-year-old classic, the value of one of his broodmares, Calverite (Lonhro), skyrocketed. Less than six months ago, Cooper purchased her from Godolphin for $310,000 at the 2022 Magic Millions Gold Coast National Broodmare Sale in foal to Street Boss (Street Cry).

Now the dam of a Group 1 winner – and a Caulfield Guineas winner, what’s more – Calverite has been elevated to become one of the most important members of the broodmare band residing on the rolling green pastures of Merricks Station on the Mornington Peninsula.

And no sooner had Cooper and his wife Lizzie toasted the great outcome with the Godolphin team, then suddenly came another major win for his brand in the next race on the card.

Tuvalu, a horse Cooper bred and sold at the Inglis Melbourne Premier Yearling Sale, won the Toorak Handicap (Gr 1, 1600m), becoming the first Group One–winner ever produced under the Merricks Station banner. Tuvalu’s dam, Hangin’ Tough (Exceed and Excel) still resides at the property and is due to deliver a foal by Capitalist (Written Tycoon) in the middle of next month.

“It was a huge day. It was quite unbelievable having Calverite on the farm and Golden Mile winning the Guineas and then for it to roll into Tuvalu, it was the most unbelievable day,” said Cooper.

Cooper is a relatively new player on the Victorian breeding scene, as is Merricks Station. He purchased the former cattle farm in 2014 and just four years later, after developing it as a horse facility from scratch, opened its gates as a commercial thoroughbred operation.

“Racing and breeding have always been an underlying passion driven by me. I have always had a passion for racing and the vision was there to evolve it.  The idea of having a farm was something that was always bubbling away and we touched the button in 2014.”

Given his savvy in this space, it’s no surprise he seized the opportunity to snare the prime block of land that is now home to Merricks Station.

“It was one of those right things at the right time moments. We drove past the block and decided to pick it up. It took a good four years of planning before the gates opened in 2018. We had to get the layout right, as it was purely a cattle farm prior to us getting involved. There was nothing there apart from wire fencing.

“Our farm manager (Dearne Gess-Jones) got involved very early to make sure the synergy and flow of the farm worked really well. That was key, because we were starting from zero.”

“‘Back in the day, there used to be railway lines down to Merricks and behind our property, they had an old railway line and that’s where it came from.”

Set on 150 acres, Merricks Station is currently at capacity with 90 horses. They are a mix of about 20 privately owned broodmares, plus spellers and young stock.

“They have some good views and it keeps evolving. We are building the next section now and that will involve a residence for us and gives us more flexibility. I can’t wait to see where it expands to in the future,” he said.

Cooper’s early foray into racing and breeding began when he had fillies in training with Matt Ellerton and Simon Zahra and it was during that time that the breeding bug bit.

“With racehorse ownership, you get the thrill of being an owner, but when you have bred them and as those mares continue to produce, the tentacles go wider into the racing game and the interest and excitement of all those horses is a very enjoyable layer to it all.”

A win in either would assure her a bright future alongside some high-quality mares at Merricks Station and help continue its ascent in the Victorian breeding industry.