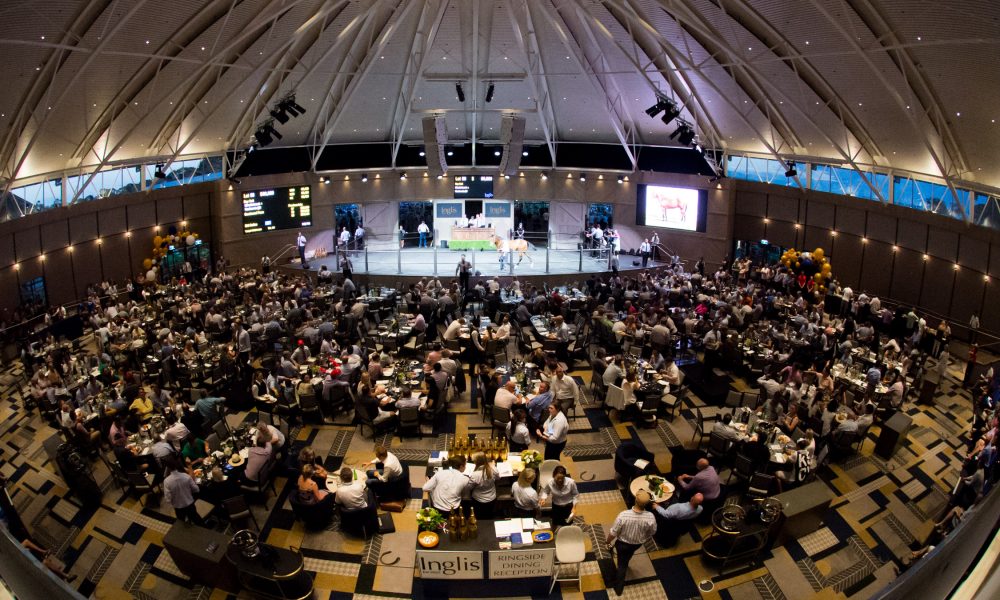 Next month’s Inglis Australian Easter Yearling Sale, traditionally the highest-averaging market of the year, was hanging by a thread last night after the federal government banned auction houses from operation.

Inglis had earlier in the day announced that it would bring forward its high-end yearling sale by two days in a desperate bid to ensure that the auction went ahead, but prime minister Scott Morrison’s latest bid to slow the spread of the deadly Covid-19 leaves the Easter extravaganza in extreme doubt.

Following a national cabinet meeting last night, the prime minister ramped up restrictions imposed on Australians and their businesses, including the closure of “auction houses”, to go with the shutdown of pubs, clubs, nightclubs, casinos and gyms which came into effect on Monday.

The new stipulations, which also included a maximum of ten people being permitted to attend a funeral and just five at a wedding, are set to be signed off today and come into effect from midnight tonight.

The dramatic escalation of the government’s fight against the coronavirus came after Inglis had confirmed the date change for the Easter sale as well as reaffirming plans to have buyers on site at Riverside Stables by invitation only.

Under the new plan, the Easter sale, comprising a 514-lot catalogue, was to be held on Sunday and Monday, April 5 and 6, but whether it can now proceed is questionable at best.

Inglis could attempt to argue it is not an auction house in terms of the type of business the government was intending to temporarily shut down due to the global health crisis. The company was unavailable for comment following last night’s revelations.

The banning of auction houses also puts Inglis’ The Chairman’s Sale and Australian Weanling and Broodmare Sale in May at risk, while rival Magic Millions’ Gold Coast National Bloodstock Sale, in May and June, is also in doubt.

Inglis had already been working to meet the strict protocols placed on it – including a 500-person limit for outdoor gatherings – to make sure the Easter sale could go ahead and announced the date change yesterday afternoon via its website.

“Inglis is aware of the challenges posed by the outbreak of Covid-19 and has engaged a biosecurity consultant to assist in management of the sale while Inglis representatives are in regular contact with a senior official in the NSW Department of Health,” a statement read.

“Inglis will continue to make itself aware of developments in what is an evolving situation and will update our stakeholders in a timely manner as necessary.”

Inglis also urged potential buyers to register if they wanted to be at the complex in the lead-up or during the auction.

“Only approved persons and their necessary associates will be registered to attend,” it said.

“There will be no access by members of the general public and people are discouraged from looking to attend the sale complex without the necessary registration confirmation.

“Prospective buyers are encouraged to consider our online bidding facilities which have been in place for many years.”

Arrowfield Stud, last year’s leading Easter sale vendor, has 63 yearlings catalogued for the 2020 auction and principal John Messara, speaking to ANZ Bloodstock News prior to the prime minister’s announcement, was “hopeful but I can’t be confident of anything because things change every day” of the auction proceeding.

“Inglis’s have gone through a very meticulous plan to keep people apart and to ensure that we meet all the government protocols and I think it can work well,” Messara said.

“At the end of day, stables need to have horses and they need another crop of two-year-olds next year.

“People will buy horses, but they may not pay the prices they would have otherwise paid but hopefully there will be some chance to have a market there.”

Last year’s Easter sale turned over more than $123 million at an average of $353,511 but global financial markets have crashed in recent weeks due to the economic implications caused by Covid-19.

Messara was in no doubt that vendors would take a hit financially at the Easter sale if it went ahead, but believes investors who were prepared to look beyond the current downturn could be the ones to come out on top.

“I have probably got the best draft of horses that we’ve ever taken to Inglis, so it is a bit unfortunate for us that we’re meeting this sort of market but I see it as an opportunity for long-term players,” he said.

“They can come in there to buy horses that they may not have been willing to pay the market prices for a few months ago and now they will probably get them at a more sensible price and away they go.

Given the impact of Covid-19 – New Zealand goes into lockdown tonight, forcing the racing industry to close for at least four weeks – it is understood that Inglis is also providing vendors with two payment and commission structure options to consider as the Easter sale figures will almost certainly take a significant downturn.

The first option is for payment terms to vendors remaining at the standard 42 days, or the second one being that the sales commission is reduced by 1.5 per cent with a zero pass-in rate but payment terms of 150 days.

Inglis had already told vendors last week that it would reduce its pass-in commission to 1.5 per cent for those sticking with a 42-day payment option.

Privately, some vendors are pessimistic about the appetite of buyers to overextend themselves at next month’s sale and have even made recommendations to some clients that holding onto their stock to race, rather than putting them through the ring, was an alternative that needed to be considered.

One potential silver lining, despite an almost certain decrease to the depth of the buying bench that normally participates at the Easter sale, is the plummeting Australian dollar which could incentivise internationals to purchase new stock even if they are not able to inspect the horses personally due to the travel ban.

Last night, the Australian dollar was trading at 58.81 US cents, down 13 cents on the same time last year.

Earlier this week, Milburn Creek’s John Muir told ANZ Bloodstock News: “With the Australian dollar under 60 cents, I’d like to be an overseas buyer looking to buy a nice colt or filly, I tell you.”